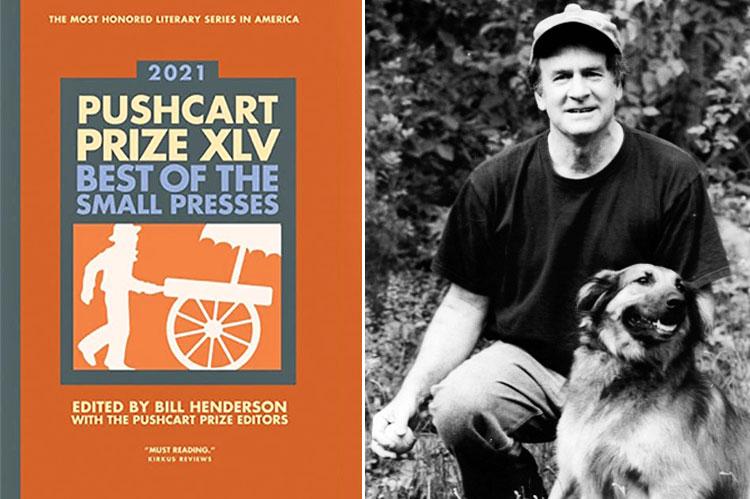 2020 is perhaps feeling downtrodden, maligned, like it doesn't have much to say for itself. Embarrassed that it's such a stinkpot. Or, alternatively, it is reveling in its infamy, preening over its plethora of internet memes, gloating over how it foisted its demands upon us. Plus, the awful slogans.

Yet Bill Henderson, publisher of the Pushcart Press for 50 years (and this year, recipient of the Distinguished Service to the Arts citation from the American Academy of Arts and Letters), is having none of it. "No pandemics will keep us down," he writes in his introduction to the current volume, "Pushcart Prize XLV" (it happens to be 45). "Many more will be on the horizon. If you have doubts about our future, banish them. Be inspired. Be comforted. Read on."

The best pep talks are rooted in authentic spirit. No baloney here. Dedicating the volume to "our Contributing Editors over the decades" and recognizing writer, editor, and reader in the introduction, Mr. Henderson leads with a full embrace of the collective community that cares about literature.

Speaking of pep talks, one of the standouts in the volume is "Teamwork" by Shawn Vestal, a story first published in The Sewanee Review, in which baloney is richly revealed in the pre, post, and during-game pep talk/ranting non-wisdom of Coach, who misguides the errant 1983 Gooding Senators football team with all kinds of racist, homophobic drivel and meaningless verbiage while the narrator, a boy on the team, feels his way toward an understanding of dissolution; youth cannot save us for long.

"Pushcart Prize XLV" is heavy on sincerity, light on cynicism, and very light on keeping the reader at a cool distance. In Austin Smith's story "Late Rumspringa" (from Narrative), the grief of a young Amish father over the loss of his teenage sons is palpable through shifting third-person narration, so close as to be tender as it tracks the man's movement through the eyes of those he encounters, moving through a pivotal day.

Shifts in focus also mark Kristopher Jansma's short story "The Samples," which appeared in The Sun. It also covers a single day, in this case creating a sense of the interlocking fragilities of life as a young woman's cancer diagnosis emerges from the details of the narrative.

The volume is heavy on depth of feeling, light on cheap shots. Though perhaps the seeming exception proves the rule in fearlessly inventive Nickalus Rupert's story "Aunt Job" (from The Idaho Review), which chronicles a perverse, techno-dystopic alternate present in which a certain puntastic cultural coming-of-age ritual involving an adolescent boy and a maternal aunt delivers an over-the-top ick fest. How it damns the absurdity of what we normalize in our not alternate but nonetheless appalling present!

Meanwhile, Karen E. Bender goes the distance pondering the wages of the present with a short story in the fabulist vein; "The Shame Exchange," from The Yale Review, imagines a government program that mandates an exchange of shame between citizens who have a surplus and government officials who have zero. Ms. Bender writes with an earnest gentleness where the snarky would be just too much to bear.

As if to punctuate, the collection features a veritable bouquet of look-back stories written in the first person from the point of view of variously alienated, unlikable young women. With distinguished and distinguishable style, Polly Duff Kertis ("In a Good Way," from Hysterical Rag), Elizabeth McCracken ("It's Not You," from Zoetrope: All Story), and Colleen O'Brien ("Charlie," from The Gettysburg Review) all offer a sense of the possibility of redemption, the power and tenderness and aching (but breachable?) impossibility of closeness with another and one's self.

Proposing its own posy is Lydia Conklin's stark, comic, pitch-perfect standout "Laramie Time" (first published in American Short Fiction), in which a woman who is on the rising tide of success with her breaking-mainstream comic strip about lesbian turtles confronts the very fabric of redemption and of closeness in her recounting of the stricken moment when, holed up in Laramie, Wyo., with her partner, push comes to shove over the possibility of parenthood.

To this reader's taste, poems by Leila Chatti ("The Rules," from Poem-a-Day), Alice Friman ("On the Overnight Train," from The Massachusetts Review), Catherine Pierce ("Entreaty," from Copper Nickel), and Stanley Plumly ("Sycamore," which appeared in American Poetry Review) step forward; each offers solace, a sense of being less alone.

In the essay department, "We at Old Birds Welcome Messages From God, Even if Unverifiable" by wiz-with-words Annie Sheppard (from Fourth Genre) delivers high diction alongside straight shooting alongside flights of fancy plus rambling that turns out to lead somewhere. Oh — the essay is about bird-watching, but not really, in case that might stop you.

If readers should happen to be seeking pandemic-adjacent material in their literary lives, look no further than Poppy Sebag-Montefiore's "Touch," which appeared in Granta, a fascinating essay on the author's impressions of the prevalence, culturally, of casual touch, a "public sense of touch," in the early to mid-2000s in Beijing. A far, far cry from social distancing.

A sense of purpose develops as the works add up across the breadth of the volume. This team of editors is interested in a sense of connection, in the sharing of thought and feeling that takes us out of isolation and into our freedom of being. This year's "Pushcart Prize" is accessible; the works are forthrightly present. They offer a proximity of sentiment that lights life. Even in the shadow of ignominious 2020.

Evan Harris is the author of "The Quit." The head of children's services at the Amagansett Library, she lives in East Hampton.

Bill Henderson's latest book is "The Family Bible," a collection of poems. He lives in Springs.