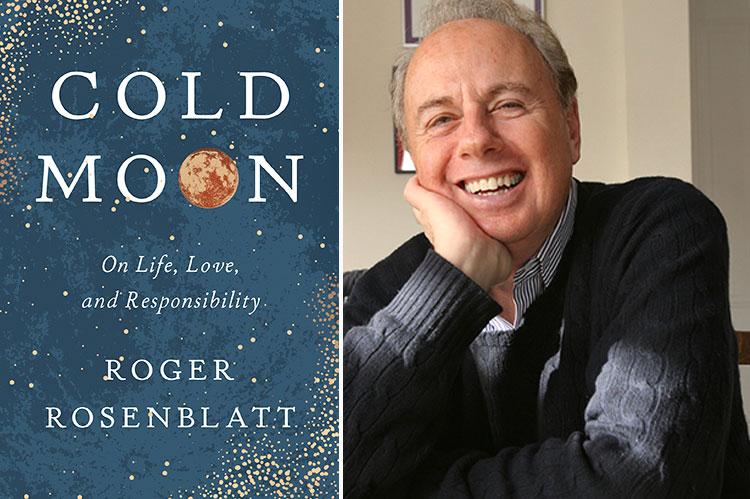 According to the Grove Dictionary of Art, "the word arabesque has been applied to a wide variety of winding and twining vegetal decoration in art and meandering themes in music," to which the Oxford English Dictionary adds, "composed in flowing lines of branches, leaves, and scroll-work fancifully intertwined."

To my mind, this describes the style and structure of Roger Rosenblatt's "Cold Moon." The whole is quite brief — a 98-page frieze wrapped around a temple of thoughts on life, death, grief.

It is an extended prose poem with runs of free associations, streams of consciousness. There is much wordplay, like "a comedy of eros" or "he who hesitates is toast," felicitous turns of phrase such as "glasses clinking like the bells of doom" (which reminds me of my favorite word image from Mr. Rosenblatt's 2012 memoir "Kayak Morning": "two swans riding their reflections"), and allusions to tease the memories of the literate: "I am an empty boat upon the ocean, out of the cradle, endlessly rocking."

Life, death, and grief are big themes. Mr. Rosenblatt evokes them with recurring patterns built of leitmotifs — the ocean, the moon, the light of the moon on the ocean. "The sea out there is just out there . . . unaware of and uninterested in the frantic little boats that ride it." In places, he paints a fairly precise paean to this place — the Atlantic shoreline of Long Island.

The 1946 movie "Stairway to Heaven" is evoked several times. It is the story of a pilot who is shot down in the war, an untimely death that is rescued by love. It, in turn, evokes the death of the author's daughter, Amy. She appears again and again as a drowned girl, lost to the mindless ocean.

The absurdity of life comes in too. It is crystalized in a description of a Sisyphean toy box: "The only things the box contained were an on-off switch and a little mechanical hand. When you turned on the box, the mechanical hand would rouse itself and turn the box off."

The whole of "Cold Moon" is a search for meaning in a seemingly arbitrary world, scrolling over the same themes again and again like an arabesque motif, weaving in and out of recollections and metaphors, doubling over itself in contradictions: "What do I see . . . when I take in the broad face and sullen gaiety of the sea?"

There's lots more. I will be brief. Try it out.

Roger Rosenblatt won Emmy, Peabody, and George Polk Awards for his essays for "PBS NewsHour" and Time magazine. He lives in Quogue.

Ana Daniel, who studied writing with Mr. Rosenblatt in the M.F.A. program at Stony Brook Southampton over a decade ago, is retired from business and teaching. She lives in Bridgehampton.