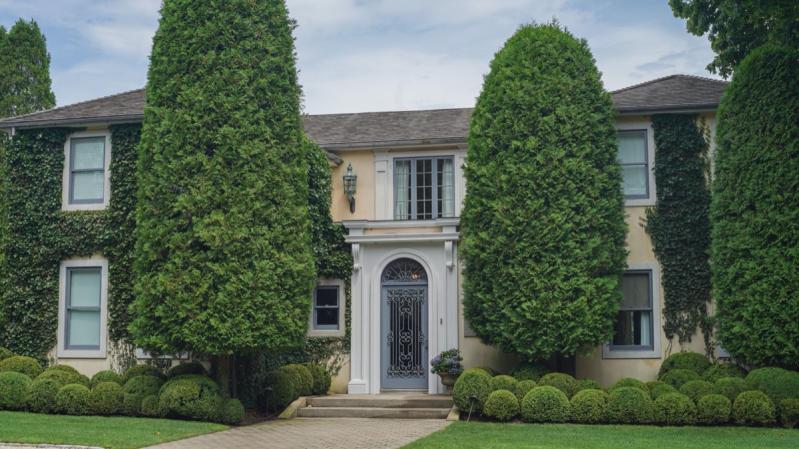 This waterfront property in Water Mill will be part of the Southampton History Museum's house tour on Saturday.
Liana Mizzi
By Jennifer Landes

The summer high season of 2022 was a return to normal and then some, as pent-up demand for events lost to Covid resulted in an explosion of parties, receptions, benefits, and other gatherings. The shoulder season is shaping up to be no different, with the full return of events like film festivals and now the Southampton History Museum's annual Insider's View: Southampton House Tour.

Set for Saturday, the tour will showcase four private residences as well as the 19th-century St. Andrew's Dune Church and the museum's 17th-century Halsey House.

Although the museum has history in its name, its tour offers a mix of historical properties and new and updated structures. The Cocoon House is a modern and LEED-certified building with an unusual rounded form. It sits on a property subdivided from a larger abutting estate designed by Stanford White. It feels current, yet the building with its curving shape appears to nod to mid-20th-century ideas of futuristic structures. It also plays with the local vernacular with its cedar-shingled exterior.

Its environmentally friendly features include thicker walls on the north and west to retain winter heat and open east and south sides to attract sea breezes in the summer. The property also offers a reflecting pool and secluded gardens.

The Captain George White House retains its original character and that of Main Street Southampton after a renovation of its interior and faithful restoration of its exterior. Its most famous occupant was a whaler and advocate for public beach access. Built in 1750, the original residence was added on to in the 1850s during White's lifetime (1819 to 1893).

In its current form it has four levels, including a finished basement, with seven bedrooms, eight baths, multiple living and family spaces, a formal dining room, and a two-story eat-in chef's kitchen. There is also a pool house and a separate garage on the property, which is downtown but screened by hedges. The renovation made use of the structure's original materials wherever it could with salvaged beams and decorative elements. The upstairs bedrooms have views mostly consistent with what White saw in his era, the museum pointed out.

At Cape Cobb, one of Water Mill's private and exclusive neighborhoods is revealed. The familiar cape design has been expanded in this example to a sizable two-story structure more in keeping with the "cottages" of the South Fork's early summer colony. The house is faithful to the style's cedar-shingled exterior and steep roofline, adding dormers to provide more space. The owners have recently updated the interior with "light-hearted, whimsical flair," according to the museum. The property's lawn faces east, landscaped with boxwoods, climbing roses, and hydrangeas.

The Vintage Villa sits on 2.5 acres overlooking Burnett Creek in Water Mill and was inspired by grand Tuscan properties in Italy. Built in the 1920s, its stucco exterior has climbing ivy and a sand color accented by its bluish gray windows and door. The formal gardens feature terraces that lead to the water and rooms that include a gated swimming pool garden.

The museum said the property retains the style of the grand era in which it was built, but has been brought into contemporary times by "revamping the landscape and redecorating the interior, which features a spacious living room, sunroom, modern kitchen, library, and dining room." There is a patio and covered pergola, pool house, guest house, and garage on the property in addition to the main house.

The public properties, the Halsey House and St. Andrew's Dune Church, will be open during the tour hours. The Halsey House was built in 1683 on property Thomas Halsey Jr. inherited from his father, who was one of the founders of Southampton. Originally facing south, its frame was shifted to face Main Street by Isaac Halsey around 1720 to 1740. Other families with names familiar to the South Fork, such as Raynor, Pelletreau, White, and Biddle, were subsequent owners. The organization that eventually became the museum bought the property in 1958 and restored it.

At one end of Lake Agawam, the church began its existence as a lifesaving station. It was acquired and donated as a church in 1879, and its rustic interior is enlivened with 11 Tiffany windows. During the 1938 Hurricane, it was almost destroyed and has since been restored and moved back on its property twice. The church is nondenominational, but its summer services are directed by the Episcopal Church.

The self-guided tour will last from 1 to 4 p.m., with a champagne reception catered by Sant'Ambroeus at the museum's Rogers Mansion from 4:30 to 6. Tickets, which benefit the museum's education and maintenance programs, are $150 in advance on the museum's website and $175 the day of the tour. Tickets are also being sold by phone at 631-283-2494.