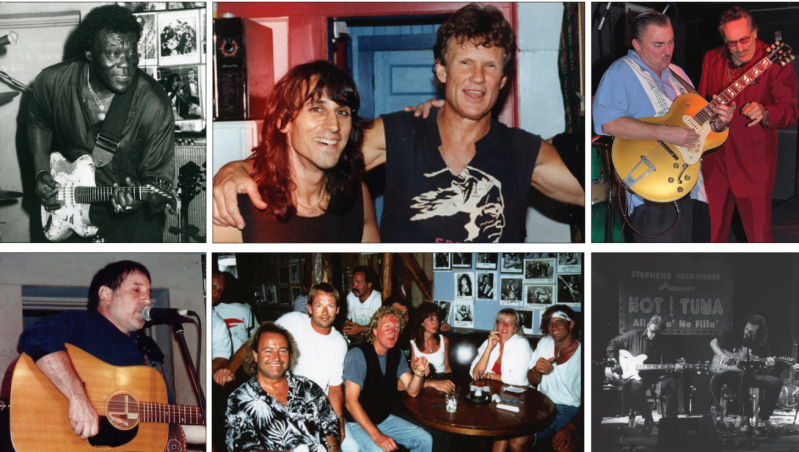 On Saturday night, the Stephen Talkhouse will celebrate 35 years under its present ownership and the rich history of live performances there, from some of popular music's legends to our local heroes. How many do you recognize?
Robert Comes and Stephen Talkhouse Photos
By Christopher Walsh

Saturday is a special day at the Stephen Talkhouse, the venerable Amagansett watering hole that has seen some 70 members of the Rock and Roll Hall of Fame perform on its intimate stage. The live music venue is marking its 35th anniversary under the current ownership, which has grown the establishment in both size and stature, with a party featuring music by Terrance Simien and Nancy Atlas.

The Talkhouse, named for a 19th-century Montaukett Native American, Stephen Taukus Pharaoh, was closed in the early summer of 1987, its owners in litigation against one another.

"It was at a time in my life where everything was going badly," Peter Honerkamp, one of its current owners, said last week. "I had written a novel that I spent seven years on. I knew it wasn't any good. I finished it, and suddenly I was confronted with the fact that I couldn't write anymore. I didn't like the job that I had justified keeping in order to write."

Over drinks with Clifford Irving, the late author, at what is now Wolffer Kitchen Amagansett, "I said, 'I'm depressed.' He said, 'Well, is there anything you ever wanted to do other than write?' And I said, 'When I was a kid I wanted to own a bar.' " Mr. Irving, he said, looked across Main Street to the Talkhouse. "He said, 'Buy that bar,' and that inspired me to put together a package with my relatives and a few friends at the time, and we bought it."

"It certainly wasn't my intent to start a music club when we initially bought it," said Mr. Honerkamp, who grew up in Queens. "It was just to have a great bar, and to find something I wanted to do for a living."

But experiences in his youth may have inspired him. After his older brother's death in a car accident in 1969, "his friends started taking me into a small club that had just opened [in Roslyn] that a friend of my brother's owned. It was a bowling alley that his father used to have, so when he took it over and started a music club, he called it My Father's Place. . . . I saw, back then, a famous music club get established in a very small space that became the cool place to play."

Around a month after the Talkhouse opened under new ownership, the musicians Eddie Mac and Klyph Black, who is a relative of Mr. Honerkamp's then-wife, "started playing here on Thursday nights," Mr. Honerkamp said. Soon after, John Hammond became the first national act to perform there. "I called him up," Mr. Honerkamp remembered. "He said, 'I'll do it for 500 bucks.' I paid him $750, and the place was packed. We then realized there was a need for live music and there was an audience for it, and we started doing national acts."

In the first year, Taj Mahal, Jesse Colin Young, Buddy Guy, and Albert Collins were among the artists to grace the venue's tiny stage. "Ticket prices were $20, $25," Mr. Honerkamp said. "In Albert Collins's case, I think it was $35. John Lee Hooker was $35. That's how it got started."

The venue was expanded in 1994, allowing a larger stage yet still providing an almost unimaginably intimate concert experience for performers of the prestige Mr. Honerkamp was booking. "Now we charge as much as $350 a ticket for the Revivalists, and people pay it because they get to see them in a small environment."

Thirty-five years' worth of live music has produced a surfeit of memories for innumerable patrons, some of whom sit at tables to see a prominent artist up close, others waiting in a long line down Main Street for late-night revelry. Paul McCartney jumped onstage one night. Paul Simon and Bobby Neuwirth supported Kris Kristofferson. Billy Joel and Van Morrison performed. Mick Jones of Foreigner has been both a performer and a member of the audience, sometimes in the same night. Simon Kirke of Bad Company and Free, Rick Davies of Supertramp, and Mike Reilly of Pure Prairie League have performed, sometimes together.

The guitarist G.E. Smith, who lives in Amagansett, is a regular. For a time, Eric Burdon was a regular performer, as Jimmy Buffett is today. Gary Clark Jr. performed to an audience that included Mr. McCartney, Roger Waters, formerly of Pink Floyd, and Jon Bon Jovi. Bill and Hillary Clinton, Mick Jagger, and the late Benazir Bhutto, the former prime minister of Pakistan, have been in the audience ("she ordered skim milk," Mr. Honerkamp recalled).

The venue has a generator now, but some of the most memorable performances -- by Martin Sexton, Rick Danko, and Glenn Tilbrook -- were acoustic and by candlelight, thanks to a loss of power. "That was pretty magical," Mr. Honerkamp said. Another time, a power outage scuttled a performance by Big Bad Voodoo Daddy. "They came back and played in the offseason," Mr. Honerkamp said. Expecting a modest turnout, he decided to make the performance a fund-raiser for John Fernandez, a Rocky Point resident who had lost his legs in the war in Iraq.

"That concert raised $4,000, but it also became the catalyst for Chris Carney," a bartender at the time, "making the decision to bike across America, which literally jump-started the Wounded Warrior Project. That wouldn't have happened if we didn't do that concert, which wouldn't have happened if the power hadn't gone out in the summer." The Talkhouse has since hosted the annual Soldier Ride and raised millions for the Wounded Warrior Project.

The venue will soon host a party for couples who met there. "How many kids have been created from this place?" Mr. Honerkamp wondered. "I ran into a guy at a deli a couple of years ago, and he reminded me that 15 years ago, when he was a regular customer, I gave him some free tickets to a Burning Spear concert. He brought some friends, had an extra ticket, and a woman was outside saying, 'I don't know if I could afford $75.' He said, 'I've got an extra ticket,' they went inside, they ended up getting married and having three kids. He said, 'If you hadn't given me that ticket. . . .' "

What is in store for the next 35 years, Mr. Honerkamp was asked. "More great music, I hope, and more great times," was his answer. "It's the smallest club in the world putting on the acts we're putting on. That's a fact."

Saturday's festivities start at 6 p.m. and tickets are $60.