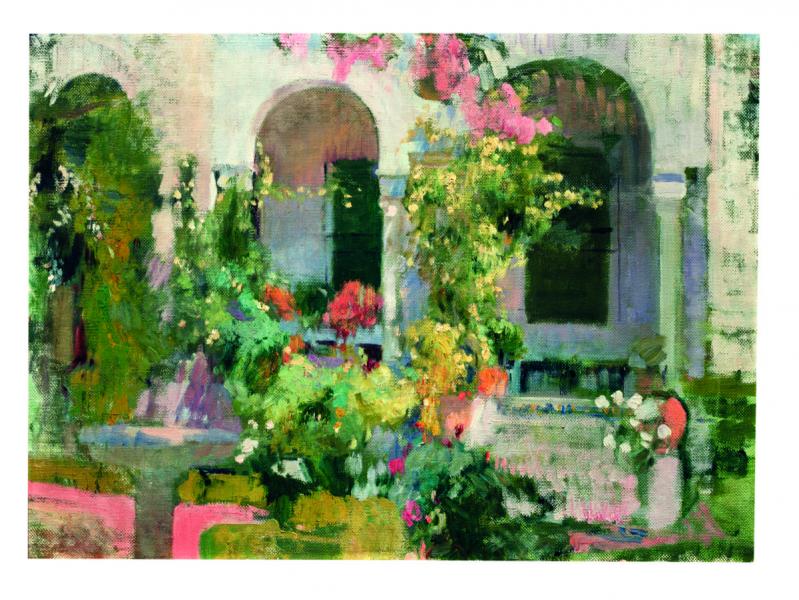 Two preeminent Spanish artists of the 20th century, Joaquin Sorolla and Esteban Vicente, drew inspiration during their final creative periods from the light and color of their gardens: Sorolla's in Madrid and Vicente's in Bridgehampton.

The first of the show's four gallery spaces will pair Sorolla's luminous paintings in the Impressionist mode with eight lyrical, abstract paintings by Vicente, inviting comparison of the artists' exploration of color, form, and light.

In his later works, Sorolla was no longer preoccupied with exact depiction. In his "Patio de la Casa Sorolla" from 1917, for example, a fountain and profusion of flowers and plants dissolve into abstraction. Vicente, too, strips his late compositions of superfluous elements, reducing structure to a minimum.

The gallery titled "In the Studio" features brilliantly colored paintings by Vicente that suggest expansive swaths of native plants and flowers as well as the structure of his garden. Biomorphic and abstract shapes populate his final works on paper, while five small whimsical sculptures made from found objects evoke children's toys.

"Other Artists/Other Gardens" shows works dating from 1878 to 2010, including Chase's "The Big Bayberry Bush (The Bayberry Bush)" from ca. 1895, which depicts the terrain of Shinnecock Hills, and Porter's "South Meadow From the Beach" (1970), which focuses on his immediate landscape.

On Friday, Aug. 12, Alicia Longwell, who organized the exhibition, will introduce Neill Slaughter, an artist and professor, who will illuminate the connections among Sorolla and his contemporaries John Singer Sargent (1856-1925) and Anders Zorn (1860-1920). The talk will begin at 6 p.m.

"In the Light of the Garden" is presented in collaboration with the Museo de Arte Contemporáneo Esteban Vicente in Segovia, and Museo Sorolla in Madrid. It is accompanied by the catalogue "Joaquín Sorolla and Esteban Vicente: In the Light of the Garden," which includes essays by Ana Doldán de Cáceres, the director of the Vicente museum, and Eduardo Bardo Gómez. It will remain on view through Oct. 16.