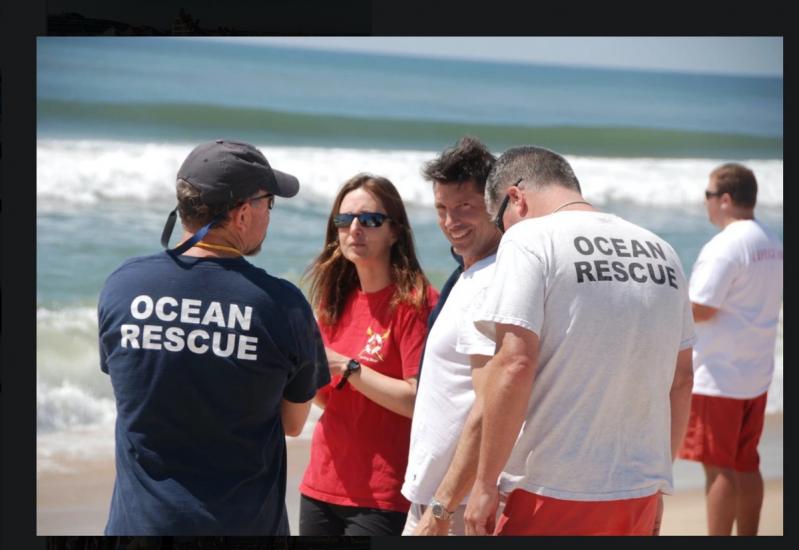 "Waterproof," a documentary about East Hampton's lifeguard traditions, is part of the Offshore Art & Film Festival.
By Jennifer Landes

An art and film festival in Montauk may not be an obvious choice for the summer with everything else going on, but a tight-knit group of organizers with deep roots in the community believe it's a good time to remind newcomers and weekenders of what made Montauk special in the first place.

Addressing competing with the overabundance of summer programming here, Jordan Bromley, one of the founders of the Offshore Art & Film Festival, said in a joint phone call with his other co-founders that "there's always something happening out here in the Hamptons or Montauk, you just can't think of it that way." He noted that a May benefit party for the festival at Montauk's Shagwong Tavern had a great turnout. "People came down. It's people that you know, it's your friends, your family that spread the word and come down. Of course, we're going to advertise, but I feel like in the beginning, this is a grassroots thing."

Mr. Bromley, William Drucker, and Christine Wexler have brought their film and art world experience to bear on the festival, which will take place starting Wednesday and continuing through July 17.

It provides "another opportunity in someone's summer vacation or weekend away," Ms. Wexler said, "to really experience something that really taps into emerging artists, culture, and the environment."

The founders have previously collaborated on several creative projects, including film and art festivals and networking events, she said. "It's this very cool group of creative people coming together and seeing all of our strengths."

They have been working for a year to put on the multi-day festival, which will be held at places like Sole East, the Ranch, and Montauk Beach House, but a lot of it came together quickly.

"Many of the venues we have longstanding relationships with . . . Montauk is a very important place for all of us," Ms. Wexler said.

The festival is showing some newer films from community members, such as "Waterproof" by Ross Kaufmann, about the tradition of East Hampton lifeguards, and Kelcey Edwards's "The Art of Making It," which has been well received since its premiere last year -- it won the 2022 audience award at SXSW. The group has also chosen some nuggets from days gone by.

The feature film "Sunburn," a festival favorite shot in 1998 that was never released but was shown at the Hamptons International Film Festival, stars a young Cillian Murphy as part of a group of Irish kids here for the summer on J-1 visas "working, partying, and living life during a crazy Montauk summer," according to a festival press release.

The back story of the film might be better than the film itself. They had a budget but employed real Irish visitors as extras, paying them in "beer and booze," Mr. Bromley said. A number of Montauk businesses donated their services to be featured in the film. "It brings back the good feelings of the time when Montauk was a different place."

All of the founders remember that time fondly, but have adapted to the new realities. "Montauk still has that allure," Mr. Bromley said. "It's just harder to find."

A screening of "Sunburn" on July 16 will be preceded by the shorts "Ghost Light" by Aaron Monaghan and "Double Yellow" by Ruairi Heading. On Friday, July 15, the Summer Scares program will have both comedic shorts and "high summer horrors." A panel discussion sponsored by the group Women Make Movies will precede those screenings.

The art part of things happens throughout the festival. On Wednesday, before the opening-night screening at Montauk Beach House, there will be a panel on NFTs and a raffle to win one. A performance by Jufu, also a panelist, will be part of the evening. Next Thursday, there will be a chance to see the Ranch's new exhibition of Frank Stella's artwork, a launch of a Sebastian Errazuriz NFT, and the screening of "The Art of Making It," all at the Ranch.

Ms. Edwards, in a bit of synchronicity, recently filmed Mr. Stella in his upstate studio. She will attend the screening, along with one of the film's producers, Debi Wisch, and both will speak about making the film.

Friday, July 15, will offer an art walk at Sole East with East End artists, featuring Juliana Sheehan of Montauk. There will be a reception for artists at 5 p.m. and a discussion. Jo Jerusalem will give an artistic performance after the Summer Scares screening.

A brunch party on July 17 will close out the festival, with awards presented to winners of the festival's filmmaker categories.

There will be other screenings and a virtual program as well. Many of the filmmakers will be on hand for discussions before and after the screenings. A full program and tickets are available at offshoreartandfilm.org.

All in all, the festival aims to remind people of where Montauk came from and why it is what it is today. "Being a person that has been in Montauk and appreciates the land and the community . . . it's really important to keep [that past] alive as well. Like sort of tapping back. There's so many new faces coming into the town, not really ever knowing it as a sleepy fishing village way back when," Ms. Wexler said.