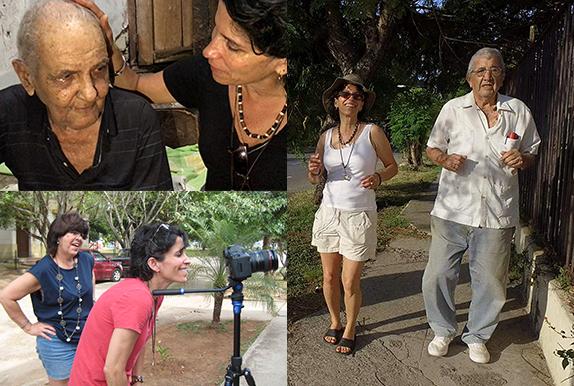 Scenes from Havana: The filmmaker Christiane Arbesu, who has a house in Hampton Bays, is seen in Cuba for the first time, learning about her roots, meeting relatives she never knew, and documenting it all in her film, "I Am Arbesu"
Rob Tate photos
By Judy D’Mello

Christiane Arbesu's exile from Cuba began before she was born.

So, needless to say, her first trip in 2016, after travel sanctions were lifted to the country from which her parents defected in 1962, was an emotion-filled three weeks. It resulted in her first documentary, "I Am Arbesu," released in 2019, and which will be screened at the Southampton Cultural Center on July 5.

"We didn't talk about Cuba a lot," she said over Zoom, describing her childhood in Montreal, where she was born in 1963. "I have three sisters who were born in Cuba but my parents didn't really discuss it a lot because I think it was a very painful decision that they had to make to leave and not be able to go back. Ever."

Growing up in Montreal, around many immigrant families, she noticed that her peers often lived with grandparents and cousins -- large, extended families. "I never had any of that. I didn't grow up with any of that, except with my three siblings and then my fourth sibling came along. So I always had a longing for something. And I didn't quite know what it was when I was little," she explained. "I was longing for . . . definitely family," she said, trailing off. "I'm a Canadian and I've been living in New York since 1985. But I'm Cuban first, of course. So, I think I learned to accept, learned to live with a loss and that separation."

Her documentary of approximately 50 minutes is an emotional, riveting discovery of the entire breadth of one's identity, of a particularly profound transition from not knowing to knowing.

In the style of cinema verite, Ms. Arbesu allows us -- fly on the wall viewers -- to witness her passionate honesty and ultimately her conclusions that nothing can be understood until it is experienced and that it's our history that helps us tell stories about ourselves.

Her father, Benigno Arbesu, was the first Cuban ambassador to Indonesia in 1959, before Fidel Castro came to power. Recalled to Havana in 1961, he and his wife, Nizida Arbesu, saw the changes that were sweeping their homeland as the new Castro regime allied itself with the Soviet Union and began to introduce communism.

"I made my mind up that I would never raise my children in what was coming to Cuba," Ms. Arbesu's father says on camera. The first to leave were the educated, landowning upper class, which included many who were appointees of the toppled dictator Fulgencio Batista. Following his return from Indonesia, Ms. Arbesu's father was offered a post in Poland; on the way there, the family sought political asylum in Canada and never returned.

The film shows the hardships the family faced in a cold foreign country with no family or money. Her father, Ms. Arbesu said, was always being followed and the house phones tapped. He was suspected of being a communist since he wouldn't denounce the Castro government out of fear that his family back in Cuba would be harmed. He was approached by the Unitd States Central Intelligence Agency and the Federal Bureau of Investigation to work for them but he refused. Instead, he did odd jobs, like cleaning toilets at McGill University (Ms. Arbesu's alma mater). Her mother worked as a translator for the United Nations.

"This is a man with a Ph.D.," said Ms. Arbesu over Zoom. "A former ambassador. My mother too was a Ph.D. It must have been so stressful. Five kids, freezing cold, no money."

What makes "I Am Arbesu" so sweetly poignant is that the viewer gets to journey along with Ms. Arbesu to someplace deeper that's concealed beneath the surface of her life. As she prepares to meet family members for the first time, at the age of 55, her nervousness is palpable. And in all that follows, there is so much sincerity, absurdity, love, beauty, the ordinary and the mundane of everyday life that those of us who haven't had our pasts cleaved away take for granted. This is the moment when the past lurches meaningfully toward Ms. Arbesu and finally becomes as real and vivid as the present. And it's heartbreaking to watch.

When the filmmaker describes, on camera, meeting her family for the first time as, "an explosion of feelings," she's not kidding. It's visible in the film, of course, but when asked about it over Zoom, it all poured out, almost breathlessly.

"I had absolutely no idea what I was walking into. I didn't know how they would receive me. I didn't know if they would think, 'Oh, here's this capitalist American, with tons of money,' which I don't have, but I didn't know what their preconceived notions would be of an American or Canadian. And when my dad left, he was a total embarrassment to the family. My cousin said that they were waiting because on the radio they would announce that my dad's post was finished and he was returning back to Havana. But he never did. So, it was a big deal for that side of the family. But I felt instantly loved. Instantly. I didn't have to work for it. I didn't have to be charming. I didn't have to be any of those things because . . . because . . . I don't know, it's just something that runs throughout your blood. That thing that is family, which is why it is so important. And every day I would meet another cousin and I would meet another second cousin. I met my aunt, my uncles. It was just absolutely beyond my wildest dreams. And then I'd discover that I have so many things in common with someone, like we both love dachshunds and drink our coffee the same way. And then my cousins would say, 'Oh my God, you're just like my grandmother.' And I'd say, 'What do you mean your grandmother? She's my grandmother too!' Of course, I never met my grandparents, but my hands, the movement, and they would show me pictures and I'd say, 'Oh my God, she looks exactly like me.' "

There was also a sad reality in the midst of this emotional reckoning. "I realized how much we lost. We're old now. We're never knew each other young. We lost so much time."

Since 2016, Ms. Arbesu, a longtime television producer and the founder of Terrebonne Productions, a video production company, has been back to Cuba seven times, but not during the pandemic. The difficulties of life in Cuba, even since 2016, means making a phone call or accessing the internet is a struggle for her relatives there. "It's hard; I've tasted what it's like to have this family and then it's taken away from me all over again," she said, adding that she plans to return in early 2023.

But there was one call, she said, that was easy to make after returning to New York in 2016. "The first thing I did was call my father. I said, 'Thank you for leaving. You did the right thing.' As much as I was enamored and enthralled, madly in love with Cuba, my life could never have been what it is now. Even with all the struggling, and having to pay rent, and worrying about bills, all the suffering and struggles in this country, it's all been worth it. I wouldn't change it for anything."

"I Am Arbesu" will be screened at the Southampton Cultural Center, on July 5 at 6 p.m. followed by a discussion with the director. Tickets are $10, available at scc-arts.org.

Hoedown on the Farm, Cocktails in the Garden
Main Beach Free Concerts in Final Weeks
Services and Counseling After Death of Popular Teacher Assistant
END_OF_DOCUMENT_TOKEN_TO_BE_REPLACED