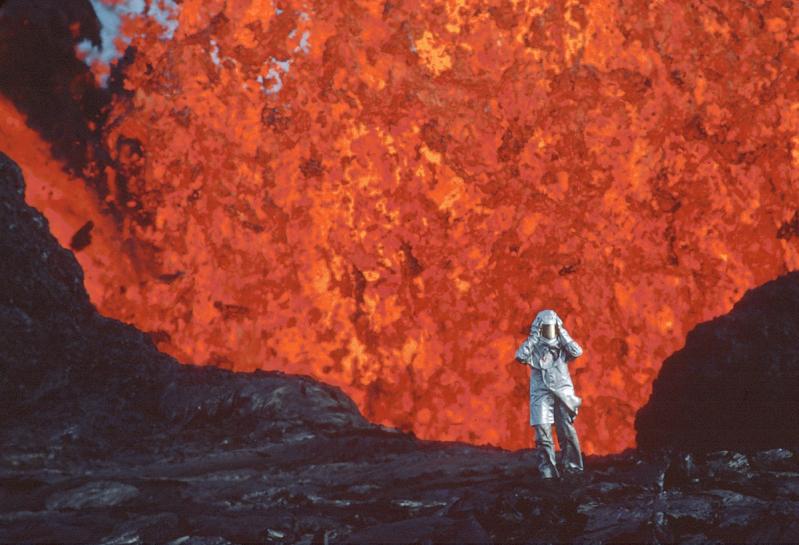 Katia Krafft in an aluminized suit while standing near a lava burst at the Krafla volcano in Iceland.
Image'Est
By Mark Segal

"Fire of Love" opens with an SUV churning through a windy, snow-covered landscape in whiteout conditions. A man and a woman emerge from the vehicle and make their way up a mound of lava rock until they reach their destination: an erupting volcano, spewing fire and smoke in a visually dazzling display of nature's uncontrollable power.

The film tells the story of Katia and Maurice Krafft, a pair of French volcanologists, and their love affair with each other and the mystery and wonder of volcanoes. It will open HamptonsFilm's SummerDocs series on Saturday at 7 p.m. at East Hampton's Regal UA cinema.

Sara Dosa, the film's director, had never heard of the Kraffts. Then, trolling through archival footage of volcanoes for another film, she came upon material about the couple. That serendipitous discovery led to others. "I came across them in a Werner Herzog film from 2016, and they started to show up elsewhere because they were actually celebrities in France in the 1970s and '80s."

"And the more we learned about them," she said, "the more we fell in love with them, not just because of their spectacular archives but because of who they were as people, their philosophical ways, their playful manner, their unique relationship, and their idiosyncrasies."

The Kraffts, who'd grown up in postwar Alsace, met in 1966. He was a geologist, she a geochemist. By the time they married in 1970 on the volcanic Greek island of Santorini, they had already begun pursuing their obsession. Not only did they explore volcanoes and travel to those that were ready to blow, but they documented their experiences with hundreds of hours of 16mm film, shot by Maurice, and thousands of photographs, taken by Katia.

It is not a spoiler to reveal that the couple died in June 1991 while filming eruptions at Mount Unzen in Japan. Maurice's brother, Bertrand, conveyed their vast archive to Image'Est, an archival facility based in Nancy, France. "We were very lucky to have gotten access to that," said Ms. Dosa, adding that there was another "bucket of footage" from television programs, radio broadcasts, and other people's documentaries.

The film, which took eight months to edit, consists entirely of archival film and photographs. The couple's story is told primarily in their own words and images. The viewer travels with them to Zaire in 1973, where they lived for two weeks on the edge of an active volcano, and to Mt. St. Helens in 1980, where they spent three months amid the ash-covered wasteland, where 57 people, including two volcanologists, had died.

Images of devastating destruction -- half-buried vehicles and buildings, animal skeletons, ruined landscapes -- alternate with stunning explosions and surging rivers of red lava, which frame the Kraffts in their aluminum suits and helmets.

At one point Katia says, "Once you see an eruption, you can't live without it, because it's so grandiose, so strong." A network of friends and colleagues alerted them whenever a volcano was ready to blow so they could get there as soon as possible.

At one point, after seeing yet another eruption that swallowed entire villages and killed thousands in Colombia, Maurice expresses his hope that their work will yield knowledge that will enable governments to better prepare for such disasters. Later, his own words encapsulate the film: "Me, Katia, and the volcanoes -— it is a love story."

"I hope their story can communicate the utter aliveness of our planet," Ms. Dosa said, "and that people can enhance their own relationship with the natural world at a time when they desperately need to care for it." A conversation between the filmmaker and David Nugent, artistic director of HamptonsFilm, will follow Saturday's screening.

"Fire of Love" will be released in theaters on July 6 by Neon and National Geographic Films.

A Holiday Gift for Surfers and Beach Lovers
Holiday Lights Go On at the Lighthouse Saturday
Covid Vaccine Clinic at St. Luke's
END_OF_DOCUMENT_TOKEN_TO_BE_REPLACED