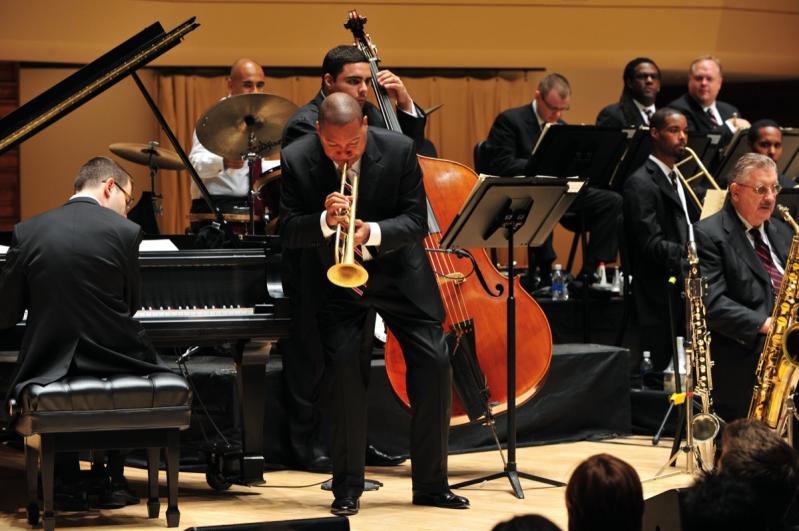 Wynton Marsalis and the Jazz at Lincoln Center Orchestra will perform for the first time on the East End as part of a Hamptons Jazz Festival concert in July.
Frank Stewart
By Christopher Walsh

The state of the Covid-19 pandemic remains fluid in its third year, but venues' proof-of-vaccine policies and the ability to hold events outdoors means a healthy return of live music to the South Fork this summer.

The biggest music story of 2021 was the first Hamptons Jazz Fest, which brought dozens of performances to multiple venues and included the legendary drummer Billy Hart performing as part of the Bill O'Connell Quartet on the stage at Gosman's Dock in Montauk, the site of long-ago concerts by the likes of Ruth Brown, the Heath Brothers, Lee Konitz, Toots Thielemans, and Richie Havens.

The festival celebrates the roots of jazz as well as cultural diversity, and showcases styles from Latin jazz to world music to traditional jazz. Most concerts are free, or tickets can be purchased online by way of the participating venues.

The fest continued to hold events in the winter, and is set to launch a second edition with a considerable splash: None other than Wynton Marsalis, performing with the Jazz at Lincoln Center Orchestra at the Southampton Arts Center on July 2 at 7 p.m. This will be the group's first-ever performance on the East End. Twenty tickets will be donated to local nonprofit organizations, enabling low-income and young people to attend.

The fest's 2022 schedule of more than 30 performances will be released on Friday with a 6 p.m. press conference at the Southampton Arts Center, followed by the Noah Preminger Quartet in concert.

Highlights this summer will include the Smalls All Stars, July 31 at 6 p.m. at the LTV Media Center in Wainscott; Bill McHenry with Gil Goldstein, Aug. 4 and 18, both at 6:30 p.m. at The Church in Sag Harbor; Mr. O'Connell's trio featuring Mr. Hart and Santi Debriano on Aug. 8, also at LTV at 6 p.m.; the Dave Stryker Trio with Charles Owens, Aug. 8 and Sept. 8 at 6:30 p.m. at The Church; Conrad Herwigs's Latin Side of Charles Mingus, Aug. 13 at 7 p.m. at the Southampton Arts Center; the Jim Snidero Quintet featuring the guitarist Kurt Rosenwinkel, Aug. 28 at 6 p.m. at LTV; the Lighthouse Project, a tribute to the late drummer Elvin Jones, Sept. 2 at 6 p.m. at the Parrish Art Museum in Water Mill, and Mr. O'Connell's Afro-Caribbean Ensemble, Sept. 10 at 7 p.m. at the Southampton Arts Center.

In addition to the venues already mentioned, the festival will visit the Hampton Library in Bridgehampton and the WLIW-FM studio in Southampton Village. The full schedule is at hamptonsjazzfest.org.

Jazz will also be heard at the Sag Harbor Masonic Club in the Whaling Museum, where Claes Brondal, a drummer and the executive director of the Hamptons Jazz Fest, holds weekly jam sessions that have included luminaries like the trumpeter Randy Brecker. The Tuesday night shows start at 7, and patrons are invited to take a picnic or dinner to enjoy while listening. Beer and wine are available at the cash bar. Proceeds from the $15 suggested donation go to charities here.

One might hear jazz or pop and rock 'n' roll at other places on the South Fork and beyond, including at the Ram's Head Inn on Shelter Island, Wolffer Estate in Sagaponack, where the Sunset Friday and Saturday performances are back, the Surf Lodge in Montauk, and the Clubhouse in Wainscott. The Clubhouse will host its Spring Fling Fest on Saturday from 2 to 9 p.m., featuring the HooDoo Loungers, Gene Casey and the Lone Sharks, the Scofflaws, and Mighty Ramon and the Phantoms of Soul.

To the west, the guitarists G.E. Smith and Jim Weider will offer another installment of "Masters of the Telecaster" at the Suffolk Theater in Riverhead on July 2 at 8 p.m. Don Felder, formerly of the Eagles, will be at the theater on July 7 at 7 p.m. The blues guitarist Albert Cummings performs on July 17 at 7 p.m. The Atlanta Rhythm Section will play on Aug. 14, also at 7.

The Westhampton Beach Performing Arts Center will also host a few artists of note this summer. Stephen Marley, son of Bob, will perform on July 10. Keb' Mo' is set for July 16. Taj Mahal takes the stage on July 24, with Chris Isaak on July 30 and Lyle Lovett on July 31. All start at 8 p.m.

Of course, the Stephen Talkhouse in Amagansett will be the noisiest venue around, with several shows happening most nights throughout the summer. Highlights are many: Lez Zeppelin, the all-female powerhouse performing the music of Led Zeppelin, will be back on Saturday and again on Sept. 4, both at 8 p.m.

Ricky and the Rockets, featuring Rick Davies of Supertramp, Mike Reilly of Pure Prairie League, and Mr. Smith, who lives in Amagansett, on guitar, will play on Friday, June 10, at 7 p.m. Dave Mason will return on June 25, also at 7. On July 6, it's Max Weinberg's Jukebox at 8 p.m. (the interactive show also stops at the Suffolk Theater on June 11). Glenn Tilbrook, of Squeeze fame, returns on July 10, also at 8.

A musician with local roots, Loudon Wainwright III, returns on July 17 at 7 p.m. Rhett Miller of the alt-country band Old 97s will be back on July 18 at 8 p.m., and Steven Page, formerly of Barenaked Ladies, will be in town on July 22 for a 7 p.m. gig.

The perennial Talkhouse favorite Donavon Frankenreiter will be back for shows on July 25, 26, and 27, all at 8 p.m. Another favorite, Joan Osborne, will perform on July 31 at 7 p.m. Martin Sexton, also a regular, plays on Aug. 4, also at 7. Yet another Talkhouse veteran, Terrance Simien, returns with his Zydeco Experience on Aug. 6 at 8 p.m. Brett Dennen will play on Aug. 25 and 26, both shows at 8 p.m.

A Conference for Young People to Create Solutions
Get Outside, Get Moving
Two Traditions, One Fair in Springs
END_OF_DOCUMENT_TOKEN_TO_BE_REPLACED