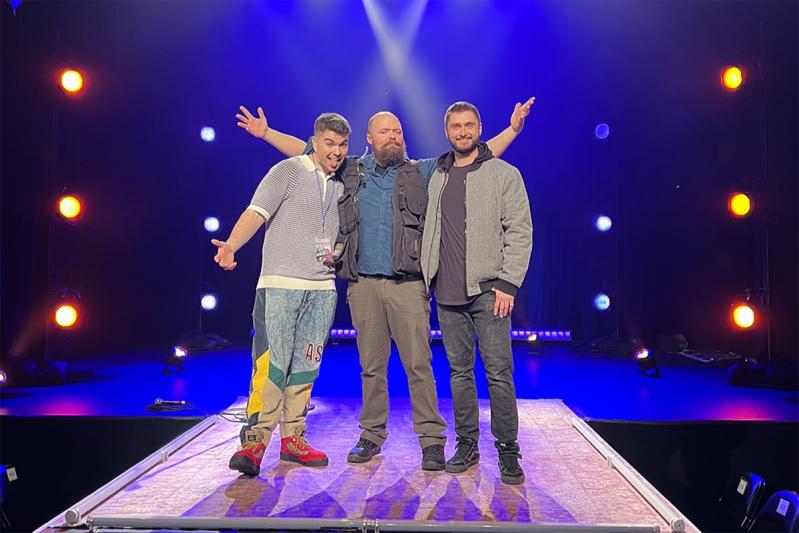 "Chris Distefano: Speshy Weshy," a 36-minute comedy special filmed in March before a sold-out audience at Manhattan's Gramercy Theater, premiered on Netflix at midnight on May 3. Mr. Distefano, a Brooklyn-based comedian, has a deal with Comedy Central, where his weekly series was just extended, and is a regular on the stand-up circuit.

The idea for "Speshy Weshy" was pitched to Netflix by three friends, Jason Nower of Amagansett, Mike Lavin, a part-time Springs resident, and John Sheridan. The connection to Mr. Distefano was Mr. Lavin. "I actually run Chris's podcasts and most of his life," he said during a Zoom call with the three self-described "Long Island camera guys who came together to take over Netflix."

At first, the "takeover" seemed unlikely. "When we pitched it, Netflix was completely uninterested," said Mr. Lavin. "But pretty much as soon as they saw our product, they changed their tune." The good news came within an hour of the team sending Netflix a one-minute clip from the finished film.

"You're looking at the crew right here," on Zoom, said Mr. Nower. "We had two other people with us for the shoot, a Steadicam operator and a crane operator. When we were preparing the legal stuff, Netflix asked us to send a crew list. They didn't understand we were it."

That the project came to fruition wasn't always assured. After a show at the Beacon Theater in February, Mr. Distefano told the team he wanted to film his next show in two weeks. "He also wanted the edit finished two weeks after the shoot," said Mr. Lavin. "We produced the entire special within a month. Netflix would take up to eight months to do something similar."

The team needed six cameras, each of which, with lenses and other components, was worth about $100,000. At noon the day of the shoot, they arrived at Adorama in Manhattan to pick up the equipment, only to learn it was at the company's Brooklyn location -- which was set to close for the weekend in one hour.

"We showed up in Brooklyn dry-mouthed and shaken," said Mr. Nower. "But once inside, we were like kids in a candy store. All the equipment we had ever dreamed of was there."

The 36-minute film was directed by Mr. Lavin, and produced, edited, and filmed by all three. Mr. Lavin and Mr. Nower had worked together for years at LTV Studios in Wainscott, where Mr. Nower is now chief broadcast engineer. Mr. Sheridan and Mr. Lavin attended Queens College together.

"We love working together, and we were definitely underdogs in this situation," said Mr. Nower. "Nobody was supporting us except for each other. Hanging out with my best buddies and just going for something that was at the top of our skill game -- I can’t describe that feeling. Your heart’s full."

The team has plans for several short films, and with a couple of series ideas they plan to bring to Netflix, "There is just going to be a wall of content from the three of us," said Mr. Lavin.