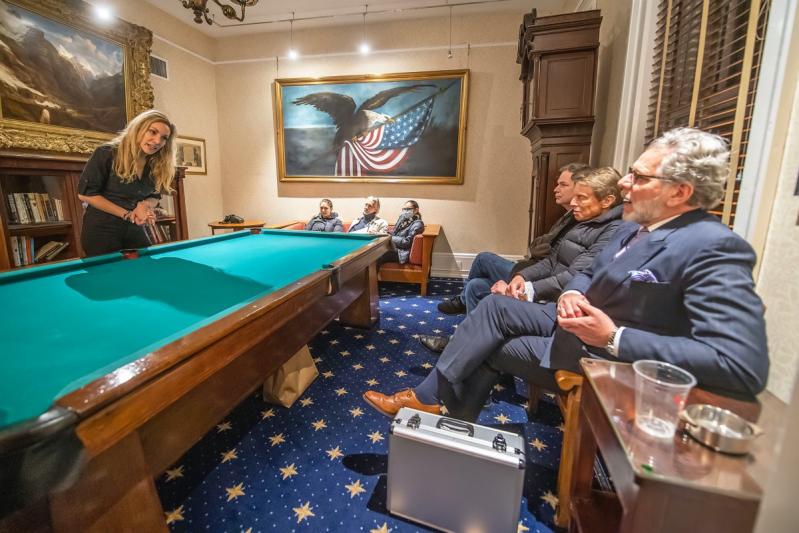 Audiences won't keep still during a Bay Street Theater immersive performance experience called "The Grift." It takes place in the theater and at various other locations in Sag Harbor.
Michael Heller
By Kurt Wenzel

"The Grift," an entertaining experiment in interactive theater, runs now through Sunday at Bay Street Theater in Sag Harbor.

Disregard the seat number on your ticket. The "show" -- Bay Street characterizes it as "immersive" theater -- begins in the lobby, where a well-dressed young man sips a martini and begins to tell an elaborate (and entirely apocryphal) story about an illegitimate son of Marilyn Monroe, named Ben. Ben has apparently become a con man and has developed a number of enemies. He introduces a short film, starring Richard Kind ("Curb Your Enthusiasm"), who instructs the audience that they are to help pull off a con on one Eddie Hammersmith, a.k.a. "The Hammer," who may or may not be Ben himself.

The audience breaks off into groups of 10, and holding a number of lockboxes sets off into the village of Sag Harbor. There they encounter family members and associates of Ben, some shady, all very charming. They provide vague clues about Ben's past and offer riddles and small challenges to help you unlock your group's box; this provides further clues and a map leading to the next challenge and the larger con.

If all of this sounds a little silly, it is, but if you're game, it can also be a heck of a lot of fun. The playwright, Tom Salamon, has cleverly assembled this site-specific experiment to include a number of Sag Harbor landmarks, the cinema and the Keyes Art gallery among them. (Mr. Salamon has written different versions for performances in San Diego and London.) There's a bit of walking to be done, but along the way you'll encounter a number of engaging performers who fill you in on Ben's back story and help you unveil the next step toward the big con.

The actors seem to have a loose script to work from but their roles are mostly improvised. Noticeably fun are Jonathan Silver as Grady and Joe Pallister as Danny, both of whom navigate their interactions with the audience with good humor and without a beat skipped. Also excellent is Rachel Feldman as Eloise, who does most of the heavy lifting in the final third, enticing the audience to trap The Hammer in a phony real estate deal, and in the show's climax draw him into a fake auction.

No, none of it really makes much sense. And it also doesn't really matter. How much fun you have with "The Grift" will depend on how much you buy in to the experiment, and what kind of a group you get in with. (It helps, incidentally, if someone in your crew plays a little piano, and also if there's someone with moderate computer skills. Otherwise, the cast will help you along.) Fall in with a reluctant bunch and the whole thing could easily be a bummer. Tag on with a lively group, as I did, and you can end up having a surprisingly good time. This is an experience that is as enjoyable as you make it.

And it's noticeably well constructed. With so many moving parts, including USB ports, lockbox codes, and direct calls to audience-member phones, there's a lot that could go wrong; more than once you may feel that things might just go off the rails. But somehow it all holds together, as the disparate groups return to the theater for the bidding on a fake Monet landscape and a final conflict with The Hammer (played by an excellent Eddie Kassar).

There is a swipe here at Marjorie Taylor Greene, an admittedly odious figure but such low-hanging fruit it seems a distraction from the play's nod at greater resonance: Having survived (just barely) four years with a president who was the ultimate Hammer-in-Chief, "The Grift" seems well timed. And with some of the modest play-acting you'll be asked to do, it may be a reminder how we're all con artists of a kind, faking it through the everyday.

But that fakery is rarely as fun as "The Grift." Ideally, it is best enjoyed with a group of close friends. If you're up for it, it's a fun diversion from an endlessly dreary East End winter.

A Conference for Young People to Create Solutions
Get Outside, Get Moving
Two Traditions, One Fair in Springs
END_OF_DOCUMENT_TOKEN_TO_BE_REPLACED