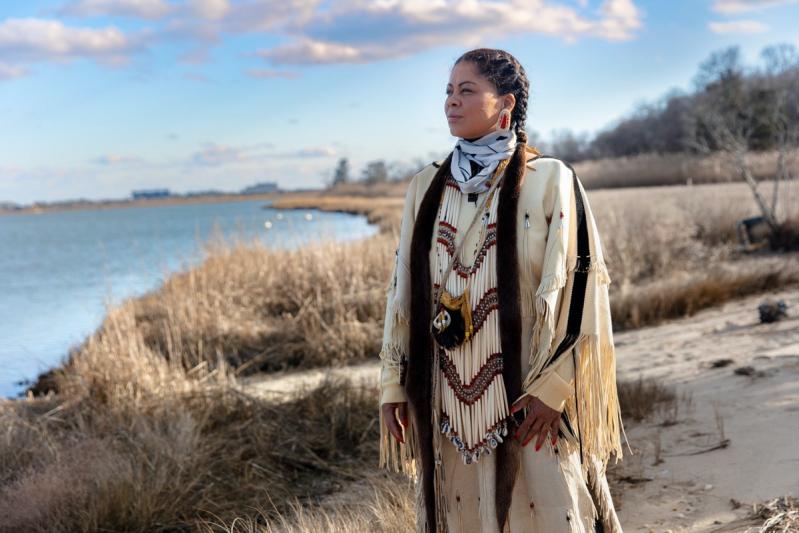 Jeremy Dennis's portrait of Nicky Banks from the Shinnecock Portraits Project will be on view at the Southampton Arts Center.
By Mark Segal

“Providing a platform for Indigenous voices from across the nation is work that we are not only honored to do, but have a responsibility to do,” says Tom Dunn, the executive director of the Southampton Arts Center.

The center’s upcoming exhibition is “Outcropping: Indigenous Art Now,” which will celebrate both contemporary Shinnecock Nation artists and Indigenous artists from sovereign nations throughout the United States.

Organized by Jeremy Dennis, the exhibition will open Friday with work by some 50 artists. The title “Outcropping” refers to both the translation of Shinnecock into English as “People of the Stony Shore” and the tribe’s long connection to the land of Eastern Long Island.

Mr. Dennis has exhibited previously at the center and has collaborated on shows with other Indigenous artists, but “Outcropping” will be his first exhibition as lead curator. Shane Weeks, another Shinnecock artist, will serve as curatorial associate for ancillary programming, which will include talks, tours, films, and workshops.

“It will be really interesting and unique to have these Shinnecock artists and Indigenous artists throughout the country in this shared dialogue,” said Mr. Dennis, who added that in Native American communities an average of 30 percent of the population are artists. Mr. Dennis will lead a free tour of the exhibition on Saturday at 3 p.m.

The exhibition will remain on view Fridays through Sundays from noon to 5, concluding on April 9.