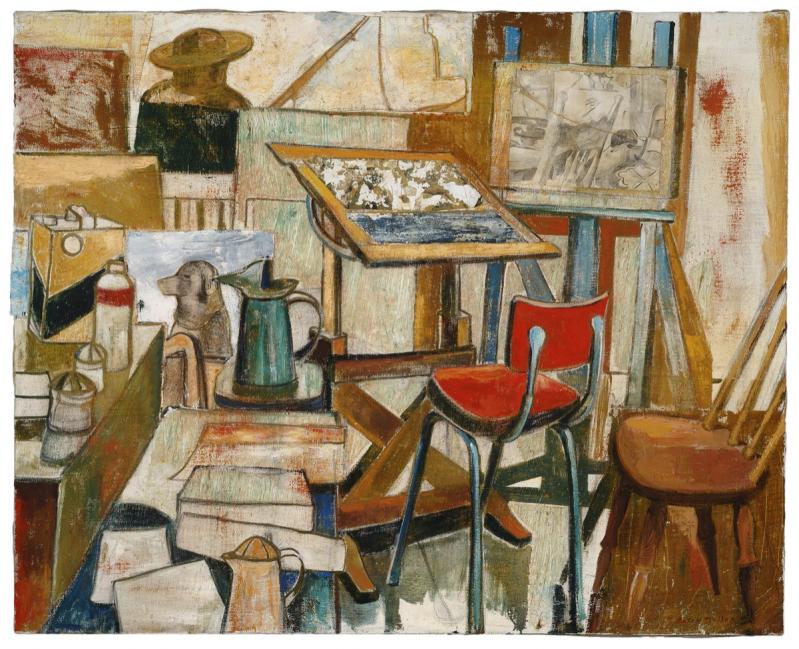 Paton Miller’s “Drawing Table” is on view in the Parrish Art Museum’s “Pictures in Pictures” exhibition.
By Mark Segal

The Parrish Art Museum in Water Mill has announced the appointment of Melanie Crader as deputy director, effective Feb. 22.

For the past eight years, Ms. Crader has served as director of exhibitions and publication management at the Hammer Museum in Los Angeles. In that role she was responsible for financial and administrative oversight of all curatorial initiatives, exhibitions, and publications.

Previously, she managed the operating budget and exhibition program for six years at the Menil Collection in Houston, where she led a variety of special projects, oversaw major digital infrastructure initiatives, and implemented long-term budget planning for building projects and a capital campaign.

The deputy director position has been vacant since last spring, when Chris Siefert left for the same position at Bay Street Theater in Sag Harbor. In the wake of the December resignation of the museum’s director, Kelly Taxter, a search for a new director is underway.

“Pictures in Pictures,” an exhibition of works from the museum’s collection of paintings and sculpture that include secondary images of other works, is now on view through March 27.

Organized by Alicia Longwell, the museum’s chief curator, the show includes works by Larry Rivers and Jane Freilicher that incorporate paintings from earlier times. Rivers’s “Untitled (Dutch Masters)” was inspired by a Rembrandt painting that was reproduced on the Dutch Masters cigar box label. Freilicher presents her version of Watteau’s “Pierrot” alongside a vase of peonies.

Paton Miller’s “Drawing Table” includes various of the artist’s works in progress in his studio, while Fairfield Porter’s “Anne in a Striped Dress” positions his wife against a patchwork of images on his studio wall.

John Torreano, Virginia Jaramillo, and peter campus, each the subject of an exhibition now at view at the Parrish, will discuss their work with Ms. Longwell on Friday at 6 p.m.

The 10 paintings in Mr. Torreano’s “Painting Outer Space/Inner Space, 1989 to Present” were inspired by images transmitted by the Hubble Space Telescope.

Ms. Jaramillo, whose exhibition “The Harmony Between Line and Space” includes five new paintings, creates work from sources that span histories and cultures.

Mr. campus’s exhibition, “when the hurly burly’s done,” features nine continuous video loops that invite meditation on the beauty of the natural and the ordinary.

Tickets to the in-person discussion are $12, $9 for senior citizens, free for members and students. The program will also be livestreamed at no charge.

Free Car Seat Checks in Southampton
Battle of the Books, and More Fun for Teens
This Week's Happenings in Montauk
END_OF_DOCUMENT_TOKEN_TO_BE_REPLACED