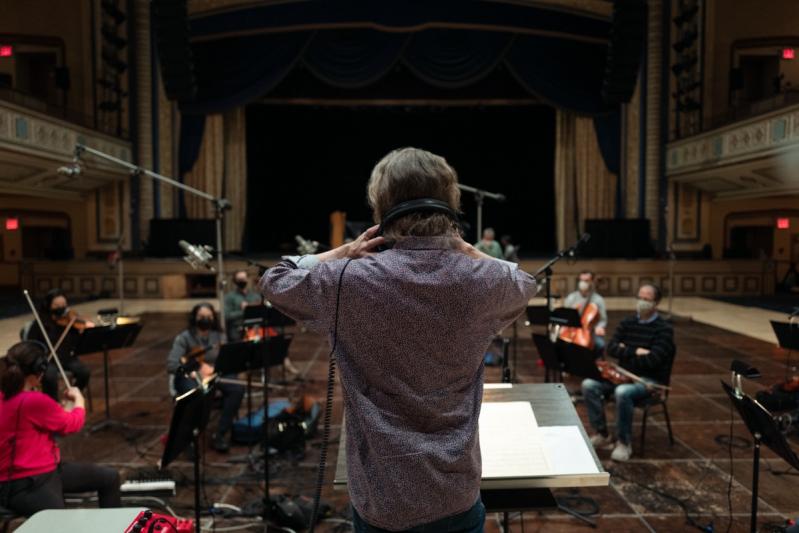 Carter Burwell worked with socially distanced musicians at the Manhattan Center, an orchestral-size recording studio built in 1906 by Oscar Hammerstein, to record the score for "The Tragedy of Macbeth."
Courtesy Apple
By Judy D’Mello

In theatrical circles, Shakespeare's "Macbeth" is shrouded in superstition, with actors simply referring to it as "the Scottish play," since bad luck is said to beget those who utter its name inside a theater, other than while rehearsing or performing. Some say the curse began as a result of the backstage death of the actor playing Lady Macbeth during the premiere in 1606, and Shakespeare himself had to take on the part. The reputation as a cursed play was bolstered over the centuries with a string of "Macbeth" revivals plagued by mishaps, accidents, and even deaths.

It appears now that the curse has crossed over to the big screen.

"They were most of the way through shooting when they were shut down by the national lockdown in March of 2020," said Carter Burwell, about the making of Joel Coen's latest film, "The Tragedy of Macbeth," for which Mr. Burwell scored the soundtrack. "And we didn't know when they would get to finish it. A lot of the actors were from the U.K., and no one knew how we could get them back into the country as borders were closed. Or, even how to get people face-to-face on a set without masks on. There were simply no answers to those questions," he said.

Ultimately, the movie was finished and released in December. Mr. Coen, working without his brother, Ethan, for the first time, has delivered a fog-bound, black-and-white, agoraphobic masterclass that reaches into the darkest corners of nether-worldly madness, treachery, pain, and violent chaos. Shakespeare's text has been pared back to a sharp one hour and 45 minutes, but loses none of its horrifying beauty. Denzel Washington in the titular role perfectly inhabits the interior life of a man whose mind is "full of scorpions," while an even more powerful Lady Macbeth (Frances McDormand) adds to his careworn anguish. Her famous sleepwalking scene is simply one of the finest pieces of self-contained acting of recent times. Mr. Coen's decision to pluck from actors from the Royal Shakespeare Company pays dividends in the end, well worth the pandemic-related troubles in the middle. And, the extraordinary Kathryn Hunter contorts her way, rather disturbingly, into all three of the weird sisters. The sum of all these parts is a film that taps right into our modern noir obsession.

Which is exactly how Mr. Burwell -- virtually a Coen repertory player by now, having scored countless films for the brothers -- saw this icy world of nihilistic bleakness, that's devoid of the trademark Coen brothers' inky humor.

"There's a sense of a thriller that's driving towards some kind of mystery that has to be concluded," he said from his home in Amagansett. "There's dark gray blood and it just reminded me of 'Psycho,' partly because I really love that movie."

He explained that audiences in Hitchcock's time and today generally expect a murder or horror movie to be scored with loud instruments, like brass and percussion. "But Bernard Herrmann was such a contrarian that he chose to do it with strings, which made it a very unique film," he said, of the legendary composer.

When Mr. Burwell saw the black-and-white footage of "Macbeth," he decided that he, too, liked the way strings felt against all that gray texture. Luckily, when he sent Mr. Coen a variety of ideas, the director agreed with the composer's direction.

Luckily, it turned out, not simply from a creative perspective, but from a practical one as well.

Although international travel restrictions were still in place in July 2020, resuming production of the film was facilitated by an almost movie-like scenario involving a powerful Hollywood producer, an immigration official at Kennedy airport, and a plane carrying Shakespearean actors having to land at precisely the moment when the aforementioned immigration official was on duty. Once on U.S. soil, the English actors were flown to Los Angeles and the movie, shot entirely on set, was completed.

In the fall of 2020, Mr. Burwell said he received his first real edit of the film. Under normal, non-pandemic circumstances, he rarely has more than six weeks to work on a movie's score, but in this case, he found he had the luxury of much more time. "Although I started writing in the fall, we didn't have to record until March of 2021 because no one was asking for the film. There were no theaters open and we had no delivery date to meet," he said.

But with the coronavirus still an issue, Mr. Burwell's decision to use string instruments turned out to be fortuitous. "The fact is string players can wear masks while they're playing, while brass and woodwind musicians, or even choral singers, cannot. So, I was aware that the more I could make it be strings, the easier it would be to record. In this case, you can really say there was a creative part to the decision to use strings, and a practical part as well," he said.

In this bloodbath of a Shakespearean play, Lord Macbeth's descent into madness happens at a furiously unstoppable pace. Mr. Burwell's music is particularly successful in its buildup, rearing slowly, but when it crescendos, it captures all the unrestrained and blood-curdling feel of a great crime drama.

In The New York Times review, the strings of his score were said to "sometimes sound like birds of prey, and literal crows disrupt the somber, boxy frames with bursts of nightmarish cacophony."

Such praise must have surely pleased the composer, who did not receive a Golden Globe nomination.

In his typical reserved, understated manner, Mr. Burwell smiled and conceded that there was a moment when he felt that his music was lost behind the intense atmospheric action. It's a pivotal scene, where Macbeth trudges furiously down the hallway toward King Duncan, on his way to self-fulfilling his uncanny prophecy.

"You hear the music at the beginning but, in my ear, I kind of lose it as he's reaching the end and about to head towards Duncan," he said, before adding, "I would have preferred to have it play right through. But, anyway, it's not up to me. It's at best a collaboration."

"The Tragedy of Macbeth" is available to stream on Apple TV+ beginning Friday.