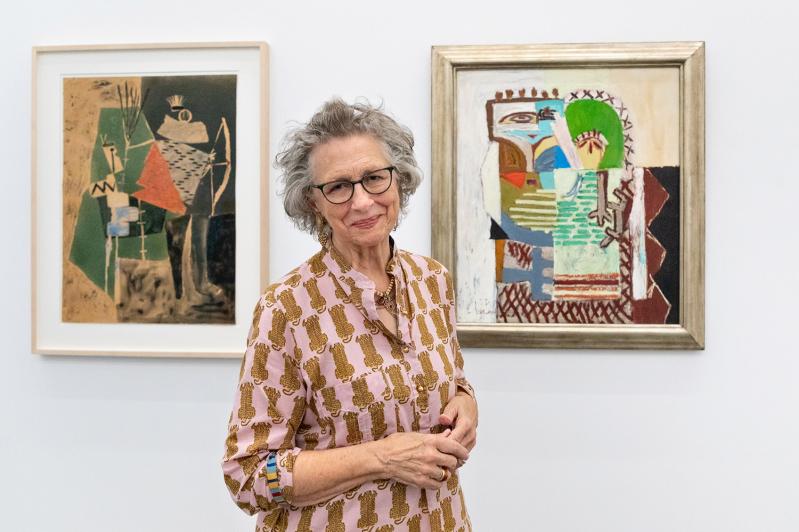 It was the spring of 1984. After a winter on the East End with her husband, Dennis Longwell, and their two young children, Alicia Longwell had begun checking the local help-wanted ads. After seeing one for a "Belt Buckle Polisher, No Experience Necessary," she had some doubts about the possibilities. Then she came across an ad for a museum registrar, preferably with three to five years of experience.

Ms. Longwell had worked in the registrar department of the Museum of Modern Art for six years in the 1970s. "I accused Dennis of running the ad," she said, laughing, during a conversation at the Parrish Art Museum. At his urging ("There are not many jobs like that out here, and it's what you love to do"), she applied.

Monday, 38 years later, was her last day at the Parrish. She retired as the Lewis B. and Dorothy Cullman Chief Curator, Art and Education.

Ms. Longwell left MoMA in 1976, the same year the Longwells were married. (They'd met on a picket line there three years earlier, during a strike by the museum's professional workers' union.) She pivoted next to the studio of the photographer Richard Avedon. "There were a lot of opportunities there," she said, mentioning his 1976 Rolling Stone magazine project "The Family" and his 1978 retrospective at the Metropolitan Museum of Art.

After she left Avedon her two children, Julia and Oliver, were born, in 1981 and 1982. At the same time, her husband was beginning work as co-writer with the actor and acting teacher Sanford Meisner on the book "Sanford Meisner on Acting." The couple decided to rent out their place in Brooklyn and live in Sagaponack, where they had a small house and he could write.

In part because of the Parrish job, they never looked back.

While working as the Parrish's registrar, Ms. Longwell said, "There was a kind of revolving door with curators. They came, didn't stay too long. It seemed ill-fated." She began to step in to the role, especially to organize touring shows that came to the museum.

In 1999, Trudy Kramer, a longtime director of the Parrish, acknowledged that Ms. Longwell was doing the curator's job as well as her own and gave her the title of curator. At the same time, with Ms. Kramer's blessing, she resumed course work toward her doctorate at the CUNY Graduate Center, traveling to Manhattan one day each week. She earned her Ph.D. in 2007.

She drew from the Parrish's collection of more than 3,500 works to organize over 100 thematic exhibitions as well, and was integral in building that collection by identifying and pursuing acquisitions, including important works by Ross Bleckner, Mary Heilmann, Lonnie Holley, Elizabeth Peyton, David Salle, and Joe Zucker.

Reflecting on changes at the Parrish and at museums generally, Ms. Longwell cited a shift in focus over the past four or five years to art and artists previously overlooked.

"This museum will always ground itself in a history, because so many artists have been here over the years. But the women who were leaders through this history have been very much understudied and underexposed." One such, she said, was Ms. Rockburne, whose Parrish retrospective was the artist's first after a celebrated career that had spanned more than five decades.

Among the shows that were particularly important to her was "Everything That Wasn’t White: Lonnie Holley at the Elaine de Kooning House," which included 35 new paintings, works on paper, and sculpture created by the self-taught artist and musician during his 2020 artist-in-residency there.

That show was "an important moment," Ms. Longwell said. Mr. Holley was "a man of immense capacity." After being invited to visit the studio during his time there, she came back to the Parrish and told the deputy director, Chris Siefert, "We need to do a show." He agreed.

The New York Times ran a long profile on Mr. Holley on the occasion of the Parrish exhibition and a concurrent one at the South Etna Montauk Foundation.

"John Graham: Maverick Modernist" also holds a special place in the curator's heart: Graham was the subject of her Ph.D. dissertation. "He's another artist who was basically underexplored. I realized the thing about Graham was that nobody had the whole story," (including the fact that he'd lived for eight years in a house on South Main Street in Southampton that was owned by Marianne Strate, his fifth wife).

Of the Graham exhibition, Robert Ayers, writing in ARTnews, said, "This excellent show, which was conceived, researched, and curated over the last ten years by the Parrish Art Museum's Alicia G. Longwell . . . presents a coherent account of Graham's career from as early as 1923." Lance Esplund in The Wall Street Journal called it "vital . . . a splendid, refreshing retrospective."

"I was glad to make a contribution to at least establishing a more factual account of his life and work," Ms. Longwell said. "I'm very proud of that. There's not a whole lot of scholarship by younger curators on that period of 20th-century art. That was a period when you just didn't hear about the women. We've started to hear more, certainly about Abstract Expressionist women whose careers were really unattended to."

A show called "Affinities for Abstraction: Women Artists on Eastern Long Island, 1950-2020," which she organized last year, is one example. Ted Loos included that exhibition in the Times's "Museum Shows With Stories to Tell," and both Galerie magazine and Conde Nast Traveler singled out the show in feature stories.

Ms. Longwell, whose husband died in April, has made plans to move to Lake Worth Beach, Fla., where her daughter and two grandchildren, ages 12 and 10, live. She has a third grandchild in Portland, Ore., where Oliver lives.

"I’m very excited about this opportunity," said the newly retired curator. "It's a chance to travel to Paris one more time." She added, with a wry grin, that in Florida, she might have time to read Joyce's "Ulysses," maybe even Proust. "It will be a nice time before the kids become too teenaged. And there's no dearth of art down there; Miami's only an hour away."

She also expressed relief that she won't have to write wall labels anymore, and that her curatorial assistant, Kaitlin Halloran, "absorbs everything so quickly, gets it and wants to. It sort of validates my career, even here at the end, to be able to impart that."