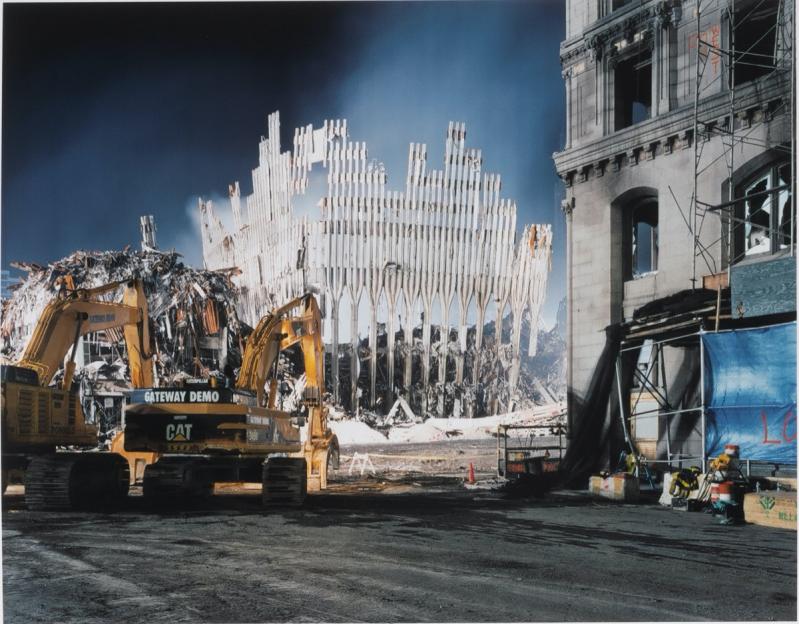 "Corner Liberty & West" is part of a selection of 40 variable-size vintage contact prints (based on 8-by-10 format) from the Aftermath: World Trade Center Archive series.
arrish Art Museum, Water Mill, N.Y. Gift of Alison and Donald Weiss, 2020
By Jennifer Landes

On Friday, the Parrish Art Museum will open a new exhibition of Joel Meyerowitz's photographs taken at Ground Zero in the hours, days, and weeks after the twin towers of the World Trade Center were brought down on Sept. 11, 2001.

"Aftermath: Images from 9/11" consists of 40 images of not just the ruins, but the people who came after the towers fell to search for survivors and sift through and cart away the wreckage. The photos are recent acquisitions by the museum and come from an extensive archive of the artist, who was the only photographer given unfettered access to the site. A selection of his images has traveled to more than 200 cities in 60 countries, according to his gallery.

This grouping spans the entire nine months he visited and documented the site. During that time, he captured more than 800 people who were working there day and night as they carted away the remnants and brought the site down to its bedrock.

Mr. Meyerowitz's West 19th Street loft faced the twin towers and a foreboding image called "Looking South" that introduces the exhibition, captures the buildings beset by dark clouds. The titles of each piece are locational and let the images provide their own drama, such as the ruined interiors of former grand soaring spaces and firemen overwhelmed by the immensity of the piles of rubble.

The exhibition will be on view through Nov. 7. First responders and health care workers will have free access to the exhibition and the rest of the museum for the month of September.

Also tomorrow, Jason Beal, an artist and author, will present an illustrated talk on his book "Sandfuture." The book is a biography of the World Trade Center's architect, Minoru Yamasaki.

In its wide focus, the book covers "the perils of sick buildings, transformations in the contemporary art market, the figure of the architect in literature and film, and the broader social and political implications of how -- and for whom -- cities are built," according to the museum.

Those attending the program, which takes place from 6 to 8 p.m., will have the first chance to see Mr. Meyerowitz's pictures. The talk will be streamed online during that time as well.

Registration for the onsite program is $12 and can be made through the museum's website. The online presentation is free, but prior registration on the website is required.