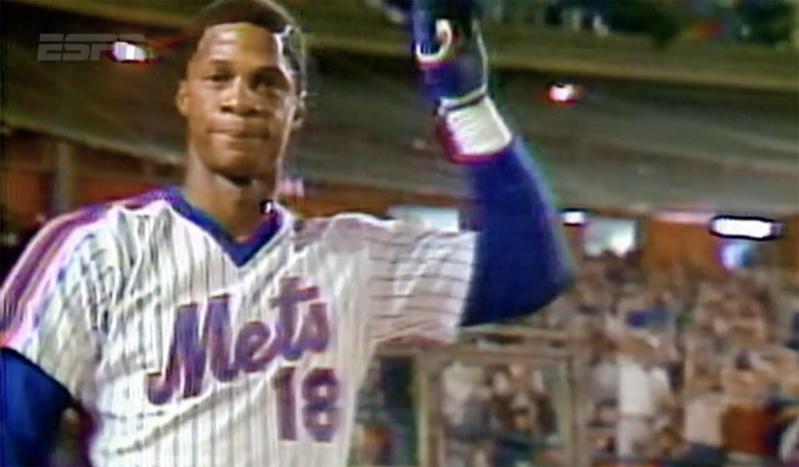 Darryl Strawberry was one of the Mets from the 1986 championship team interviewed in the documentary "Once Upon a Time in Queens," showing Friday at the Southampton Arts Center.
By Mark Segal

'Rime' in Montauk
“The Rime,” a one-man interpretation of Samuel Taylor Coleridge’s epic poem “The Rime of the Ancient Mariner,” will be performed by Gabriel Portuondo, an actor from East Hampton, outdoors at the Montauk Lighthouse on Saturday and Sept. 18, both days at 6:30 p.m.

The poem begins with the Mariner stopping a guest at a wedding party to tell him a story of a long-ago sailing voyage during which he killed an albatross with his crossbow. His angry shipmates hung the seabird’s carcass around his neck as a burden of guilt, which in turn provoked the anger of the spirits. Coleridge uses such narrative techniques as personification and repetition to create emotional impact and feelings of danger.

Guests have been encouraged to take seating and picnics. Tickets are $25 and available from eventbrite.com or the lighthouse gift shop. Proceeds will benefit the lighthouse.

Baseball and Surfing
Two outdoor film programs are coming up at the Southampton Arts Center, starting Friday with a free panel discussion and screening of "30 for 30: Once Upon a Time in Queens," the ESPN documentary about the New York Mets and their 1986 World Series-winning season.

Gates will open at 6 p.m. The panel, featuring the sportswriter Mike Lupica and Nick Davis, the film's director and producer, will start at 7, and the screening will follow. Free popcorn, Crackerjacks, soft drinks, and swag will be on offer.

Surf Movie Night will come to the center on Monday starting with a Surf Swap from 5 to 7 p.m. A program of surf-inspired short films will follow at dusk. The evening is the annual fund-raiser for the Eastern Long Island chapter of the Surfrider Foundation, which works for clean water and coastal preservation programs and campaigns.

A link to register for the Surf Swap is on the center's website. Guests have been advised to take chairs or blankets for both screenings.

Open Call
The Hampton Theatre Company in Quogue will hold auditions for three roles in "Native Gardens," a comedy by Karen Zacarias that will open on Oct. 21 and run through Nov. 7. Auditions will be held on Sunday from 5 to 7 p.m. and on Monday from 6 to 8 at the Quogue Community Hall, 125 Jessup Avenue. Rehearsals will begin on or around next Thursday.

The available roles are for a female engineer, age 60 to mid-70s, a female gardener and Ph.D. candidate in her early 30s, and an ambitious male attorney, also early 30s. Auditions will be from the script. Those unable to attend can contact George Loizides, the director, at [email protected] to arrange an alternate time.

It's brief, but the trailer hints at a film of talking heads in classic East Hampton settings, including Richard Barons, former director and current curator of the East Hampton Historical Society, seated in a Windsor chair in front of a windmill, addressing the factual history as well as the legends associated with the 3,318-acre site.

The island, which has been private since it was acquired by Lion Gardiner in the 17th century as the first English settlement in New York State, can be seen from Springs.