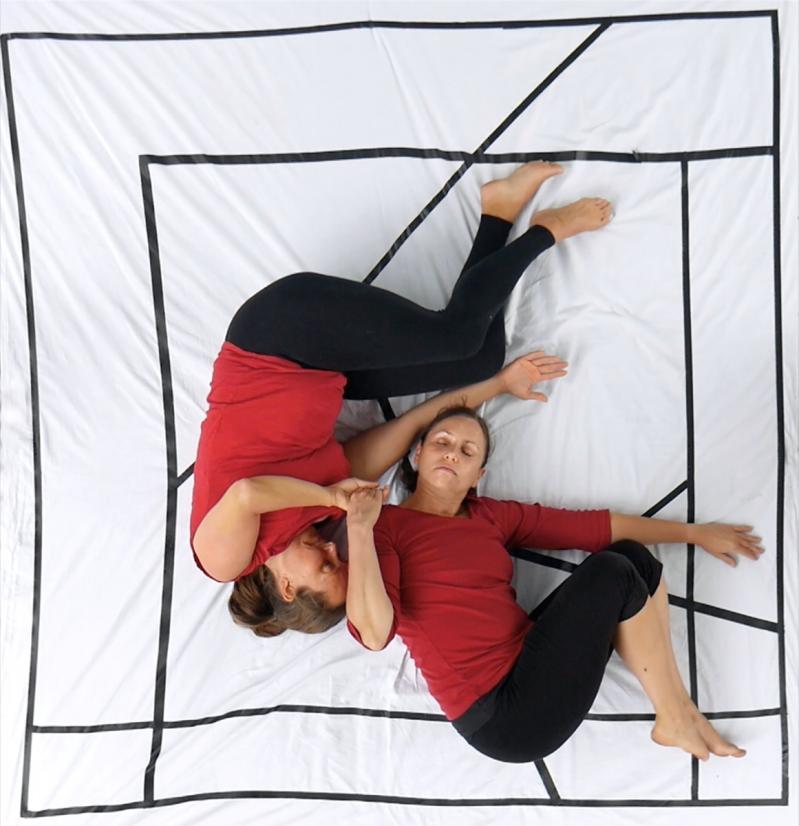 Ann Robideaux, left, and Andrea Cote created “Social Fabric: In the Public Square,” a video installation to be presented at Guild Hall.
By Mark Segal

Art inspired by the pandemic has already become a category of artistic practice. “Drive-by-Art,” an exhibition of work by 52 South Fork artists that was displayed on lawns and roadsides in May 2020, was one response to the need for social distancing. It included some works that referred specifically to life during the pandemic.

Speaking of “Social Fabric: In the Public Square,” a video installation coming to Guild Hall’s garden on Saturday evening, Andrea Cote, an interdisciplinary artist and co-creator with Ann Robideaux of the work, said, “We started with the idea a couple of months ago when social distancing became part of our language.” She noted that six feet, give or take a few inches, is the size of the typical human body.

“The six-foot space is what a lot of us have been moving inside of,” she said. “Ann and I have become very familiar with that space around us, and we began experimenting with how elastic this space is, what it’s like to move within it, and how much can you stretch it.”

As the piece developed, they invited both professional dancers and “people who just enjoy moving” to participate and decided to delineate that space with six-foot-square bedsheets decorated with geometric forms and cosmological patterns.

The installation will consist of video projections on three of Guild Hall’s garden-facing walls. On the fourth side, Chris Jones, a composer and sound designer for television and film who has trained in bass and percussion, will provide live music.

Audience members, who have been invited to come and go as they please, will see video of the performers moving on sheets, shot from above, sometimes alone, sometimes in pairs, sometimes in larger constellations. “The square was very open for people to interpret in their own way,” said Ms. Cote. The figures in the largest projection loop, which runs for 25 minutes, are larger than lifesize.

Ms. Robideaux, a choreographer and dance filmmaker, worked with Ms. Cote several years ago on another site-specific performance, “BodySite,” as part of the Jackson Pollock Centennial Celebration.

“We have a complementary way of working,” said Ms. Cote. “It has been a really fluid experience. It’s a very playful piece, there’s a lot of play in it.” They see the garden space, itself a square, as a way to bring people together. “We’re all in this communal square, but we’re also in our own small isolated squares.”

“Social Fabric,” which has been organized by Christina Strassfield, Guild Hall Museum’s director and chief curator, will be on view from 7 to 8 p.m. and is free. Visitors can drop in any time. Guild Hall’s café will be open, and there will be bistro tables and chairs in the garden.

This article has been modified from its original and print versions to correct the time of "Social Fabric," which was listed incorrectly as 7 to 9 p.m.