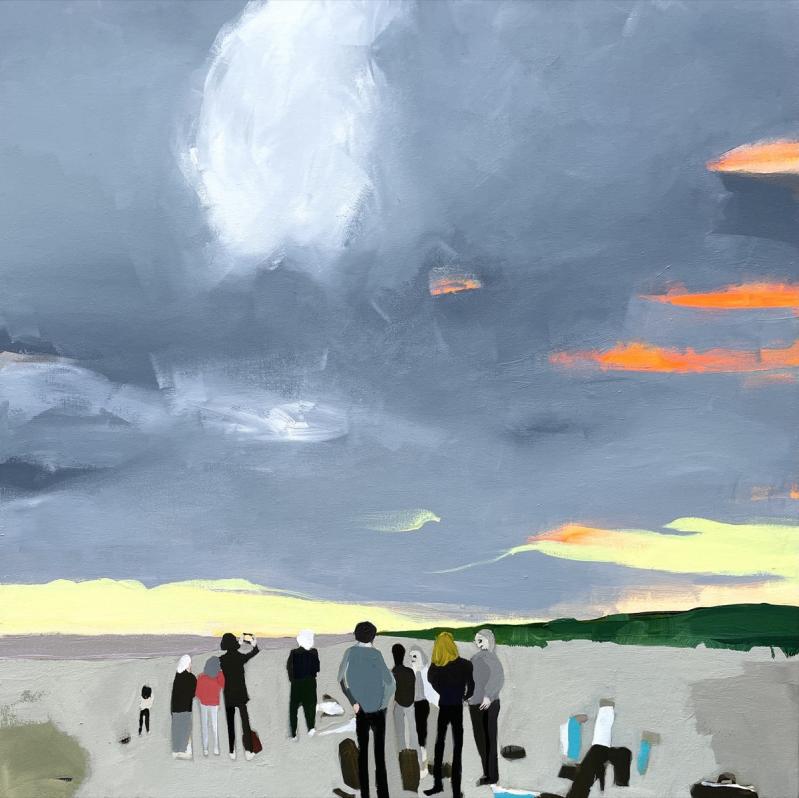 Sculpture, Architecture
A solo exhibition of architecture and sculpture by Hans Noë will open at the Fireplace Project in Springs with a reception Friday from 6 to 8 p.m. and continue through Sept. 19.

Mr. Noe, who came to New York from Germany in 1949, studied at Cooper Union with Tony Smith and at the Illinois Institute of Technology with Mies van der Rohe and Ludwig Hilbersheimer.

The show includes a selection of his sculptures, which have never been exhibited, and drawings and models for three houses he designed in East Hampton.

The gallery is publishing a catalog on Mr. Noe’s work with an essay by Lawrence Weschler, who will take part in a conversation with the artist on Saturday at 11 a.m.

Foraging for Art
LongHouse Reserve in East Hampton will launch Art Foray II, a scavenger hunt for artworks by a roster of celebrated artists, with a reception Friday from 5 to 7 p.m.

Organized by the artist Scott Bluedorn with the guidance of the LongHouse Junior Council, the Art Foray, which will continue through Oct. 9, invites participants to follow photo clues that will lead to a piece of original art hidden on the grounds. A map and pamphlet will help the foragers in their search

To be eligible to win, explorers are asked to photograph their discoveries and either post them on Instagram or email them to [email protected]. Winners will be selected by a random drawing at 4 p.m. on Oct. 9, and will be notified by LongHouse.

Springs Art and History
“Arts and Archives,” an exhibition of work by 50 East End artists along with historical exhibits of the area’s fishing, farming, and Native American communities, will be on view at Ashawagh Hall in Springs Friday through Sunday. The show is a benefit for the Springs Historical Society, which operates the Springs Library.

A reception will be held on Saturday from 4 to 7 p.m., and a conversation with some of the exhibiting artists will take place Sunday morning at 11.

Seafaring Culture
The Arts Center at Duck Creek in Springs will present “Wayne Magrin: His Brother From Another Mother,” an exhibition of large-scale representations of seafaring culture, from Saturday through Sept. 12. A reception is set for Saturday from 5 to 7 p.m.

The gallery has said that Mr. Magrin’s paintings combine the drama and energy of Marsden Hartley’s seascapes with the flattened depth of field and minimal compositions of Milton Avery and the emotional impact of Sidney Nolan, an Australian painter.

Mr. Magrin lives and works on the northern beaches of Sydney, Australia.

Coal to Newcastle
“This room needs flowers,” an exhibition of five works by Spencer Finch that record and mimic such natural phenomena as falling leaves, cherry blossoms, and a day in the life of a daisy, will be on view at the Madoo Conservancy in Sagaponack from Friday through Sept. 24.

Using watercolor, woodblock, and photography, Mr. Finch “distills his observations of the world into glowing abstract color, but also diverts them through cultural and historical filters,” according to the Lisson Gallery, which represents his work. The show's title is a line from the poem “Afterward” by James Schuyler, a close friend and collaborator of Robert Dash, Madoo’s founder.

Picasso and Pollock
The Pollock-Krasner House and Study Center’s virtual lecture series, presented in conjunction with its exhibition “Picasso in Pollock,” continues on Sunday at 5 p.m. via Zoom with “American Artists’ Responses to Picasso After Mid-Century,” a talk by Michael FitzGerald, a professor at Trinity College in Hartford.

The series will conclude on Aug. 29 with “Picasso and Pollock in Peggy Guggenheim’s Collection,” a lecture by Philip Rylands, the founding administrator and director of the Peggy Guggenheim Collection in Venice. Mr. Rylands will show paintings by both artists and chronicle relevant exhibitions between 1942 and 1950.

Burns and Griffis at Nightingale
The Sara Nightingale Gallery in Sag Harbor is opening concurrent solo exhibitions of work by Perry Burns and Melora Griffis with a reception Thursday from 4 to 6 p.m.

“Circus of the Rising Sun” is a series of new paintings by Mr. Burns that celebrates the search for joy through the visual metaphor of a sunrise. Just as no two dawns are ever the same, the paintings display a variety of colors, shapes, and sizes.

The works in Ms. Griffis’s “Moon Buoy” series are narrative landscapes that address the hours between late afternoon and sunrise. The paintings focus on the sometimes lonely and intimate experiences that unfold in subdued light.

The exhibition will remain on view through Aug. 30.

Hassinger at Guild Hall
Maren Hassinger, an artist whose work is on view in a yearlong installation at Dia Bridgehampton, will discuss it at Guild Hall with Donna De Salvo, the senior adjunct curator of special projects for the Dia Art Foundation, and Christina Strassfield, Guild Hall Museum’s director and chief curator, on Saturday at noon. The talk is free.

Spacek in Gansett
“Fiberglass Menagerie: Surf Scrap Reconsidered,” a solo show of work by Peter Spacek, will be on view at Grain Surfboards in Amagansett from Friday through Sept. 20. A reception will take place Saturday from 5 to 8 p.m.

Mr. Spacek repurposes discarded surfboards and fins by manipulating color, form, and detailed etching, a modern interpretation of the craft of scrimshaw. The “menagerie” is a collection of birds and fish with some surprising elements, such as eyes that light up.

New at White Room
“Stray the Course,” a show of work by nine artists, will open Friday at the White Room Gallery in Bridgehampton and continue through Sept. 19. A reception will be held Wednesday from 5 to 7 p.m.

The gallery’s directors, Andrea McCafferty and Kat O’Neill, note that for artists, mistakes can lead to breakthroughs, and that “it is in straying where artists find the magic . . . their voice.”

Abstraction in Southampton
“Journeys in the Aether,” an exhibition of 18 large-scale abstract paintings by Mark Seidenfeld, is on view through Aug. 30 at the Heritage Brazil Gallery in Southampton, a showcase for work by Brazilian designers, artists, and artisans.

The Woodstock Era
“Woodstock and Beyond,” an exhibition of photographs by Roger Sichel of such music luminaries as Joe Walsh, Janis Joplin, Paul Butterfield, and Johnny Winter, will open at the Maidstone Hotel in East Hampton with a reception Friday from 5 to 8 p.m.

Photographs of the 1960s and ‘70s by Mr. Sichel, who is also a festival producer and artist, have been exhibited in galleries and published in rock magazines and other periodicals.

The works will be on view in the hotel’s lobby, lounges, dining room, and other public areas through April 2022.

Sale for Eastville
Superposition Gallery, which organizes exhibitions and events in various locations highlighting emerging and mid-career artists, has launched an online benefit sale to raise funds for the archival collections of the Eastville Community Historical Society in Sag Harbor.

The sale, which is accessible at artsy.net/partner/superposition, includes work by 14 artists “of the diaspora from the gallery’s global community . . . [and] local artists from Sag Harbor,” said the gallery. It will run through Aug. 31.

This article has been modified from its print version to include the benefit sale for the Eastville Community Historical Society.