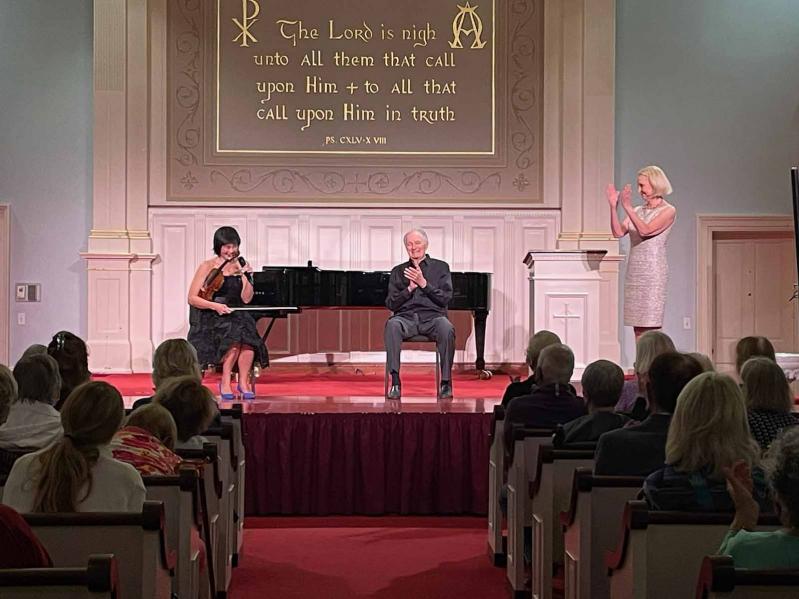 Before Bridgehampton Chamber Music could return to the stage this summer, plans had to be made and finalized sometime around February, with all the uncertainty about the course of the pandemic. Last week, Marya Martin, BCM's founder and director, said at the beginning of the first program of the season that she and Michael Lawrence, its executive director, had decided at that time that “they would definitely have music this year.”

They ultimately planned to have two one-hour concerts for most programs, with vaccination and mask protocols, so the audience size would be limited and there would be distancing between parties. The concert on Aug. 4 at the Bridgehampton Presbyterian Church delivered a program whose repertoire was poignantly fitting for the times, and that was also adapted to the needs of the day.

The program was called “Composer Portrait: Bach’s Chaconne,” highlighting the master’s Second Partita for solo violin and especially its famous last movement, the extraordinary Chaconne. The violinist was Jennifer Koh, who is internationally acclaimed for her performances of standard as well as contemporary music; she has appeared with the New York and Los Angeles philharmonics, and the Atlanta, Chicago, and Singapore symphonies. The narrator was Alan Alda, the esteemed actor, comedian, director, screenwriter, and author, who has long been a friend of BCM.

Mr. Alda began his portrayal of Bach by asking if Bach was “a bloodless, intellectual genius, or a man with passions like ours, flaws like the rest of us.” He answered in his unassuming yet communicative style, with charm, humor, earthiness, and information gleaned from contemporaneous church and town records.

Bach “had an appreciation for the pleasures of being alive,” he said. “He was also an obstinate, headstrong grouch who didn’t mind insulting musicians he didn’t admire.” As examples, Mr. Alda told of Bach's being brought before the church consistory after he called a student “a nanny goat bassoonist” and in which at least one dagger was drawn, and again after he “invited an unfamiliar maiden” into the choir loft -- who eight months later became his wife.

Bach’s Six Sonatas and Six Partitas for solo violin were written between 1717 and 1720, when he was employed as the court musician for Prince Leopold of Anhalt-Coethen. The prince took his musicians on an extended trip with him in 1720, and Bach returned to learn the devastating news that his wife had died. It is often thought that the profound Chaconne must have been written as a response to this tragedy, and while we don’t know that for sure, it appears probable.

The Second Partita has five movements, each of the first four being several minutes long and the last one, the Chaconne, being about 15 minutes, exceptionally long for this genre. A Chaconne, like the other four movements, was originally a dance form that eventually became a musical art form. The work is extremely challenging technically. It is filled with raw emotions of grief, loss, uncertainty, and longing, and yet has a sense of hope and reassurance. I would add that these emotions are parallel to what many of us are feeling at this point in the pandemic, which made it all the more touching and immediate.

It takes great verve and stamina to carry off such a demanding and intense work. Ms. Koh’s playing had a masterful, assured technique and was authoritative and poised in its interpretation. I also thought her performance had a fine proportion of an authentic Baroque style, filtered through a 21st-century lens.

Although there was a starkness to having only one performer and one instrument onstage, the image fit the starkness of the music as well as of the present moment. We may usually think of the violin as playing just one line, but this work is full of counterpoint, double stops, and elaborate sections of arpeggiando involving bouncing bow strokes to play full chords, so there is a fullness to it. It was clear that the audience became absorbed in the world of its sound.

The Chaconne as a musical form is a set of variations based on a short, repeated bass line, offering numerous opportunities for Bach to explore twists and turns in melody, figurations, and texture, each one like a vignette of a longer story, perhaps as he recalls various memories and ponders his future. And that is how his genius is poured into a structured form. While program music, which is music that is meant to evoke images, impressions, or events, belongs more to the Romantic era and is not considered to be part of the Baroque ethos, it is sometimes hard for us not to hear it that way, especially with a work like this one.

All five movements of the Partita are in the key of D minor, but there is a breathtaking place more than halfway through the Chaconne when it changes to D major. One can hear a moment of assurance, hope, and quiet acceptance. Then it returns again to the opening theme in D minor, but at this point there is a sense of transformation after having made the journey. It finally ends on a bare, single octave -– an ending to the music, but, appropriately, not a sense of complete resolution. It was all sensitively illuminated and commandingly realized by Ms. Koh.

The program ended with a question-and-answer session, a new feature for the festival. There was discussion about how an artist memorizes music and how the dance forms evolved into art forms. Ms. Koh commented that the solo violin Sonatas and Partitas seem never to have been performed in Bach’s lifetime, which perhaps makes them all the more of a treasure for us today.

For me, as probably for others in the audience, this was the first large in-person event I had attended since the pandemic began, and I think these conversational moments among Ms. Koh, Mr. Alda, and the audience added a measure of warmth and community, which was particularly welcome after so much isolation in the last year and a half.

Bridgehampton Chamber Music events continue through Aug. 22 with music by Beethoven, Brahms, Tchaikovsky, Vivaldi, Piazzolla, Rota, and Bruch, and a commissioned work by Eric Ewazen. Full information is at 631-537-6368 or bcmf.org.