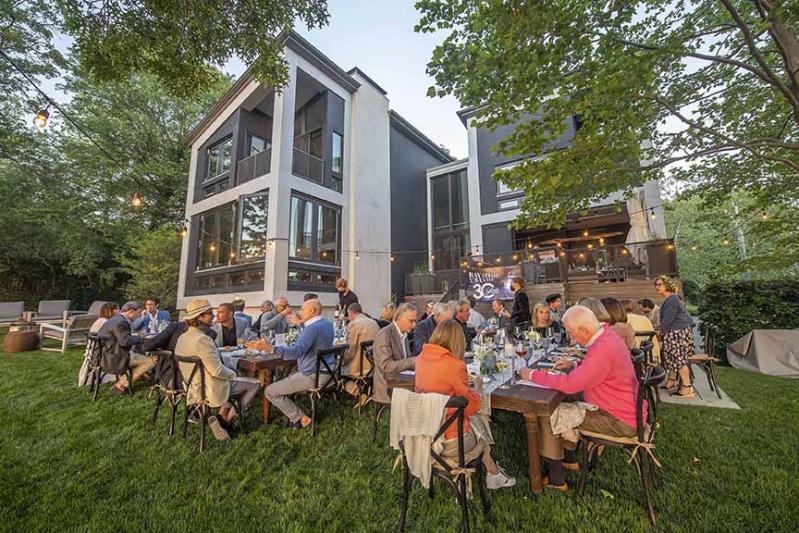 A benefit dinner party was held on June 10 at the home of Tracy Mitchell, Bay Street Theater's executive director, and Blaze Makoid, an architect.
Mike Heller
By Mark Segal

Bay Street Events
Instead of its usual 500-person benefit party held on Long Wharf in Sag Harbor, this year Bay Street Theater has lined up a series of small dinner parties at private residences.

Next up is A Memorable Evening in Memphis Modern, which will be held next Thursday at 7 at the Southampton home of Eric and Joyce Segal. The evening will include a conversation between Scott Schwartz, the theater’s artistic director, and Madeline Myers, a composer-lyricist, about her newest show, “Double Helix.” Musical performances by Bobby Conte Thornton and Samantha Massell will also be featured.

As part of its Lifelong Learning Series, sponsored by AARP Long Island, Bay Street will present “A Year to Lighten Up,” a virtual seminar conducted by Jim Ryan, a motivational speaker, next Thursday at 7 p.m. Mr. Ryan is the founder and president of Jim Ryan Talks, an organization dedicated to helping people develop their potential for living a joyful and fulfilled life. Registration is via Bay Street’s website.

Chamber Concert
The Parrish Art Museum in Water Mill has partnered with Bridgehampton Chamber Music to present an outdoor concert on the museum’s terrace on Tuesday at 6:30 p.m.

The program will begin with Boccherini’s Quintet for Flute and Strings in B flat Major, G. 442, one of the many chamber works by the composer that exploit the technical resources of his own instrument, the cello. Tchaikovsky’s “Souvenir de Florence” in D minor, op. 70, which was composed for two violins, two violas, and two cellos, will follow.

The featured musicians are Marya Martin, a flutist and artistic director of the festival; Tessa Lark and Benjamin Beilman, violinists; Haesue Lee and Ettore Causa, violists, and Mihai Marica and Peter Stumpf, cellists.

Tickets are $35, $30 for museum members, and must be purchased online in advance.

Live Music Scene: Jazz and More
The first annual Hamptons Jazz Fest continues this week with a number of performances between Southampton and Montauk.

Hector Martignon's Banda Grande will perform tonight from 8:30 to 10 at the Southampton Arts Center. On Saturday from 6 to 8 p.m., the Richard Baratta All-Star Latin Jazz Septet will celebrate music in film at the LTV Media Center in Wainscott. Also on Saturday, the Benny Benack Quintet will play at the Southampton Arts Center, 7 to 9 p.m. The Bill O'Connell Quartet featuring the drummer Billy Hart plays at Gosman's Dock in Montauk on Sunday from 6 to 8 p.m. The latter concert is covered separately in this section.

With the exception of the concert at LTV, all performances will be held outdoors. The Hamptons Jazz Fest now requires proof of Covid-19 vaccination or masks for all events. Those planning to attend have been asked to refer to the venue to confirm its requirements.

More Music
The vocalist Vanessa Trouble will perform at the Ram's Head Inn on Shelter Island on Sunday from 6:30 to 9 p.m.

Jon Divello is the Sunset Friday performer at Wolffer Estate in Sagaponack, 5 p.m. On Saturday, same time, it's the Clinton Curtis Band.

Jettykoon will play at Main Beach in East Hampton Village on Tuesday, 6:30 to 8 p.m.

Nancy Atlas performs at the Surf Lodge in Montauk on Wednesdays from 5:30 to 8 p.m. Reservations are required.

The Sturdy Souls will play at Liars' Saloon in Montauk tomorrow, 4 to 7 p.m., at the Montauk Lake Club on Saturday from 5 to 8 p.m., and on Sunday at the Sandbar at the Royal Atlantic, also in Montauk, 5:30 to 7 p.m. The band plays every Monday from 6 to 8 p.m. at the Surf Lodge in Montauk.

New from Sag Cinema
The Sag Harbor Cinema will launch a new education program, SHC-EDU, on Monday evening at 7 with a screening of “Accepted,” Steven Pink’s 2006 film about a high school student who, after being rejected by all the colleges he applied to, creates a fictional technical institute to fool his parents. Bill Collage, the film’s writer, who is also chairman of the cinema’s Education Committee, will introduce the film and answer questions after.

Upcoming programs in SHC-EDU include a fall workshop with John Warren, a screenwriting professor, opportunities for writers to workshop new material, and curricula partnerships with Pierson High School in Sag Harbor.

The cinema’s website is the source for tickets to the screening.

The event will include live musical performances of songs of the sea, boat-building demonstrations, self-guided tours of the Custom House, as well as beer, wine, soft drinks, and snacks. Tickets are $25 to $50 for nonmembers, free for Preservation Long Island members; advance registration on the website is required.

This article has been modified from its original and print version to include the programs at the Sag Harbor Cinema and Preservation Long Island Custom House, news of which was received after the print deadline.