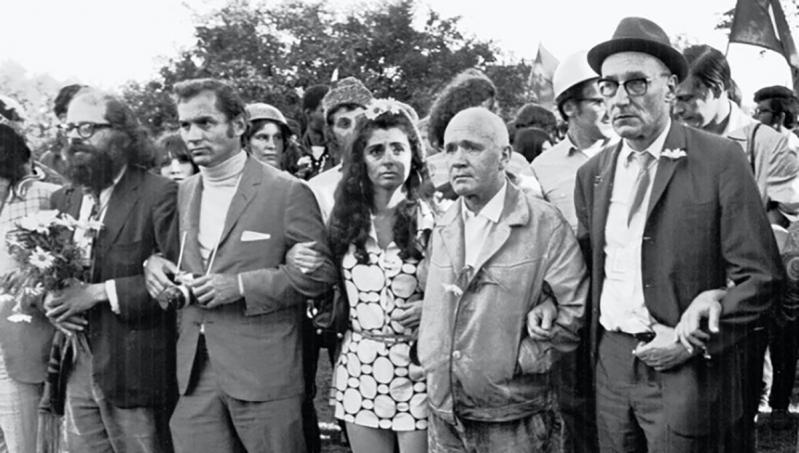 When in March 2020 the Hachette Book Group announced it would not publish Woody Allen’s memoir, “Apropos of Nothing,” Jeannette Seaver wasted no time. “I had never met Woody at that point. I looked through my Rolodex, and I didn’t know anybody who knew him,” said Ms. Seaver, the founder, with her late husband, Richard Seaver, of Arcade Publishing.

Within a few days she was meeting with Mr. Allen at his Upper East Side apartment. Arcade released the book two weeks later.

“We firmly believe in upholding the right to freedom of speech in the world of publishing, and as a result, we’re pleased to support not only this terrific book but also — and even more importantly — this democratic principle,” Ms. Seaver said at the time, in a statement to the media.

Her stance should come as no surprise to anybody familiar with the couple's background in publishing. In 1959, Mr. Seaver went to work at Grove Press, which was owned by Barney Rosset. Over the next 12 years, Grove published D.H. Lawrence’s “Lady Chatterley’s Lover,” Henry Miller’s “Tropic of Cancer” and “Tropic of Capricorn,” William Burroughs’s “Naked Lunch,” and, in 1965, “The Story of O,” which Mr. Seaver translated.

“Practically every book had an issue that had to be dealt with,” said Ms. Seaver during a recent conversation in her Sag Harbor living room. “For 10 years, Dick and Barney, who was a maverick, too, traveled to every state in this country with Charles Rembar, their attorney, to fight legal fights. Every state had its own parameters. And they won.”

“Thanks to Dick and Barney, America can read any book it wants -— well, until now.” When W.W. Norton withdrew Blake Bailey’s biography of Philip Roth from circulation in April, Ms. Seaver went after that book as well. But Skyhorse Publishing, Arcade’s parent company, beat her to it. Whatever Mr. Bailey did or did not do “has nothing to do with readers who want to learn about American literature,” she said, “and Roth was one of the big guys.”

While publishing has been her lifeblood since she joined her husband at Viking Press in 1971, a previous career as a concert violinist began in Paris in the 1950s. Her father was a writer and diplomatic correspondent who was a spy for the French Resistance during World War II; her mother was a violinist who'd studied in Berlin and at the conservatory in Budapest.

“When my mother was in Berlin, she shared an apartment with another student. They both worked very hard, she on her music, the other girl on her acting and singing. The other girl was Marlene Dietrich.”

Ms. Seaver graduated from the Conservatoire de Paris with the first prize in 1952, the same year she met Mr. Seaver, who was working there in publishing. The year before, he'd happened upon two novels, written in French, by a then virtually unknown writer named Samuel Beckett. After reading the books, he wrote the first article in English on Beckett for Merlin, a literary magazine published in Paris.

Merlin also published Mr. Seaver’s translation of “Watt” in 1952, and the Seavers remained longtime close friends of the Irish emigre. “I loved Beckett because he was particularly special, and unique above all the other people,” said Ms. Seaver. “I was very attracted to his aloneness and his integrity and his humor. The guy was funny.”

After they were married in 1953, Ms. Seaver won a grant to study at Juilliard with Ivan Galamian, who, she said, “was considered the Balanchine of his profession,” and the couple moved to New York a year later. A career of touring and concerts followed, as did the birth of the first two of their three children.

“Touring became a bit of a monster for me to leave my family behind,” she said, “so, in the heat of feminism, I decided to give it up. I called my agent, who thought I had flipped. ‘I have booked you for the next three years, how could you do that to me,’ he said.”

Soon after, Mr. Seaver was getting ready to leave Grove Press and start his own imprint at Viking. “He said, ‘Look, we’re both at a funny turning point, why don’t I teach you publishing?’ I said, 'Me? Publishing? I can hardly speak English.’ That’s how it all began. I did sort of go down in the trenches and learn the profession, and -- voila!” They worked together at Viking until starting Arcade in 1988.

Growing up in France, Ms. Seaver took naturally to cooking, but when she moved to New York in 1954, “I couldn’t find anything. So I started making croissants, charcuterie, rillettes, and various pates. I didn’t like the bread in the supermarket, so I baked my own. Cooking was an interesting diversion from publishing, which was highly concentrated, abstract, and cerebral.”

“I needed to work with my hands. I always loved cooking, and it was a way to seduce my husband.” One thing led to another, and in 1975 Knopf published her first cookbook, “Jeannette’s Secrets of Everyday Good Cooking.” “It was pretty gutsy on my part, because it was sort of demystifying Julia Child. I wasn’t arrogant, but I was saying there are ways to do things more simply and get the same result.”

As it happened, Child liked the book enough to attend its publication party, and subsequently invited the Seavers to lunch at her house in Cambridge, Mass. “She was cooking and serving. It was just great.” Craig Claiborne gave the book a double spread in The New York Times.

Five more cookbooks followed. “My New Mediterranean Diet Cookbook: East Better and Live Longer,” is the latest, published last year. “But today there is so much available on the internet, that I’m not sure about the future of cookbooks. I hope I’m wrong and that they have a long life.”

Ms. Seaver showed a visitor a copy of “The Tender Hour of Twilight: Paris in the '50s, New York in the '60s: A Memoir of Publishing's Golden Age,” her husband’s posthumous memoir, which she edited after he died. She then confessed, “Now I’m trying to write. I’m hard at work on my memoir. Interestingly, I was the one who held hands with authors and encouraged them, but now I’m feeling so vulnerable. There are days when I think, who gives a fig anyway. But then again, maybe there will be some interesting vignettes that could be of value.”

She is still “way too active” at Arcade, she said, working simultaneously on several books at various stages of production. The imprint has published some 500 titles by 300 authors, among them Beckett, Tolstoy, E.M. Cioran, and Octavio Paz, and, more recently, Mo Yan, Ismail Kadare, and Andrei Makine.

The Seavers first came to the East End in the 1960s. “ ‘The Story of O’ sold very well at the time, so from the money Dick earned we bought a little house in Southampton.” They lived in Southampton for 45 years, “but after Dick died, I couldn’t handle it.” She now rents the same house in Sag Harbor every summer.

One of their closest friends here was the artist Jack Youngerman, who lived in Bridgehampton. Mr. Seaver knew Youngerman from college in the 1940s, when both were in the Reserve Officers Training Corps. “Jack was studying journalism, but Dick noticed that he was always doodling and said, ‘I think you have talent.’ So Jack went to Paris to the Ecole des Beaux-Arts, and the rest is history.”