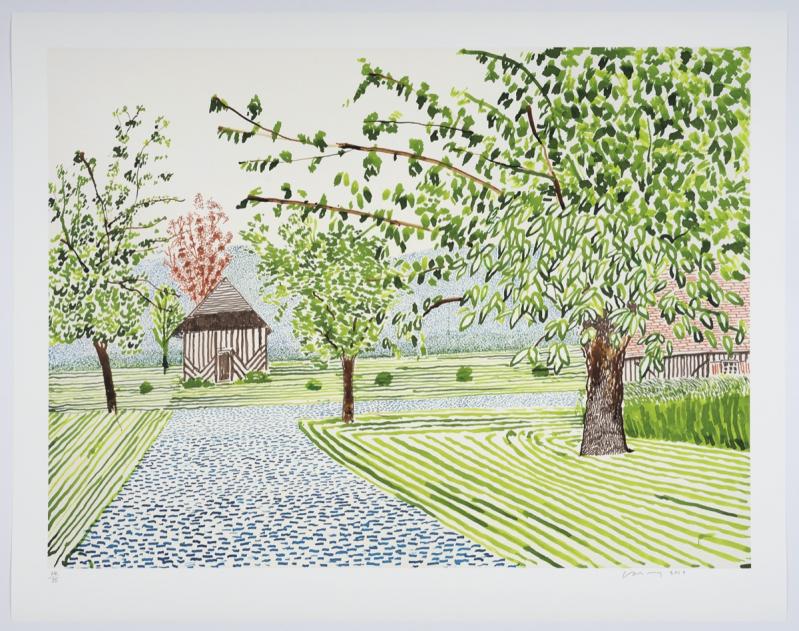 David Hockney's study of "The Entrance" from 2019, an inkjet print on paper
© 2021 David Hockney, via Pace Gallery
By Mark Segal

New in the Village
The Berggruen Gallery, which has been based in San Francisco since 1970, has opened a temporary exhibition space at 55 Main Street in East Hampton. The gallery is presenting a selection of paintings, sculpture, and limited-edition prints that reflect its dedication to juxtaposing historical works with contemporary art.

The show includes works by such postwar painters as Richard Diebenkorn, Helen Frankenthaler, and Wayne Thiebaud, and pieces by John Currin, Odili Donald Oditi, and Beatriz Milhazes, among others. The gallery will remain open through Sept. 30.

Hockney at Pace
A solo exhibition of work by David Hockney opens Thursday at the Pace Gallery in East Hampton and remains on view through June 6. The 14 prints on display illustrate the artist's home in Normandy and its surroundings, as well as the interior of his studio. The works invite the viewer to admire the power of nature as the French countryside blossoms and spring gives way to summer.

The exhibition also includes three new iPad drawings printed on paper that capture the inside of Mr. Hockney’s house. He has been drawing regularly with the iPad since it was introduced in 2010.

Leiber Opens
The Leiber Collection in Springs will open for the season on Saturday between 2 and 5 p.m. with two exhibitions. “Centennial Legacy: A Celebration of the Life, Love, and Art of Judith and Gerson Leiber” will feature Judith’s handbags and Gerson’s abstract paintings.

Rivers will be represented by “Legs,” the notorious 16-foot-tall sculpture that was a bone of contention between Janet Lehr and Ruth Vered, on whose Sag Harbor property it was installed, and their neighbors and the village government. Also on display will be Mr. Salle’s “Elko Park,” which has not been seen in 30 years.

In addition to Ms. Aycock’s "Untitled Cyclone" on view at the arts center, another work from her twister series, “Twister Grande (Tall),” has been installed outside The Church in Sag Harbor.

Though linear, the drawings are layered with color and content, transforming landscapes, text, objects, and portraits, including reinterpretations of images of Lindsay Lohan, Val Kilmer, and palm trees.

Deep in the Quotidian
“There’s There There,” a group exhibition organized by the artist Rashid Johnson, will open at Hauser & Wirth in Southampton on Saturday and continue through June 20.

The show includes works by David Hammons, John Smith, Vija Celmins, Sheree Hovsepian, and Alteronce Gumby, among others, which, according to the gallery, reflect on the rewards of close consideration of the mundane -- the routine gestures, daily detritus, and the ebbs and flows of time that fill the backdrop of our lives.

Five at Folioeast
“Now and Then,” a group show of work by five artists, organized by Coco Myers of Folioeast, will open Friday at Michael Del Piero Hamptons in Wainscott and remain on view through June 20. A reception will be held Friday from 5:30 to 7:30 p.m.

Vintage ink paintings from the 1960s and ’70s by David Slivka, acrylic on panel paintings by Hiroyuki Hamada, mixed-media works by Beth O’Donnell, bronze sculptures by Paul Pavia, and ceramics by Rosario Varela will be situated among the shop’s furniture and accessories.

Jeff Muhs at Roman
“Superheavy Nights,” a solo show of work by Jeff Muhs, will open on Saturday at Roman Fine Art in Sag Harbor, with a reception from 5 to 7 p.m. It will continue through June 27.

The exhibition includes a selection of works from the artist's ongoing “Slipstream” series, in which the background, often black, is overpainted by a dense mass of color. When combined, oscillation between background and foreground causes the viewer to slip between disparate yet synthesized elements.

Marking a Tragedy
“The Night Tulsa Died: The Black Wall Street Massacre, 1921,” a series of images by Leslee Howes Stradford, will be on view at the Keyes Gallery in Sag Harbor from Thursday through Monday, with a reception set for Thursday from 4 to 7 p.m.

The work memorializes the Tulsa race riot of 1921, when mobs of white residents attacked Black people and businesses in the racially segregated Greenwood neighborhood of that Oklahoma city.

Ms. Stradford, a descendant of victims of the massacre, is currently in residence at The Church in Sag Harbor, where she will discuss the work on Sunday at 4 p.m. to a limited in-person audience and via Zoom.

Neon at the Parrish
“Work No. 2210: Everything Is Going to Be Alright,” a 70-foot-long neon sculpture by Martin Creed, will be installed on the south-facing façade of the Parrish Art Museum in Water Mill Friday, and will remain through Nov. 30.

One of the British artist’s most iconic works, the sculpture was first shown in 1999 in a derelict district of East London. It is emblematic of the artist’s practice, which uses language, ordinary materials, and everyday interventions to communicate with a broad public.

Lucas's Flowers
MM Fine Art in Southampton will present a show of recent large-scale floral paintings by Edwina Lucas from Saturday through June 13, with a reception set for Saturday from 6 to 8 p.m.

Ms. Lucas’s current body of work explores the unique landscape that characterizes the East End and the fauna that live there, including turtles, birds, rabbits, fish, and frogs. A resident of Sag Harbor, she works from life and in natural light.

JHB in Southampton
For the second summer, JHB Gallery of New York City will present exhibitions at Jetsam Studio, a Southampton atelier founded by the designer Quinn Pofahl. The solo show, opening Thursday and continuing through July 22, includes framed drawings, photographs, and a wall installation by Jaanika Peerna.

The artist's work expands the conception of drawing to engage the rhythms and movements of the body in broad gestural mark-making. Working on Mylar, Ms. Peerna's drawn lines are often changed or erased by the application of water and ice, which are manipulated with two hands in whole-body movements.

Thirteen at AB NY
AB NY Gallery, which is in the former studio of the artist William Quigley on Newtown Lane in East Hampton, will open Thursday with “It’s Never Abstract to Its Author,” a group show organized by the gallery’s director, Sarah Scribner, and Mr. Quigley. A reception will be held on Saturday from 5 to 8 p.m.

The 13 artists in the exhibition explore abstraction, using a variety of personal images, materials, and processes. The show will run through June 15.

Mural Competition
The Clubhouse in East Hampton, in collaboration with the White Room Gallery in Bridgehampton and the Rich Mothes studio, has issued a call for artists to participate in the creation of a mural in the restaurant’s outdoor dining area. Those interested have been asked to submit three images and a resume or website link to [email protected] by Friday.

The jurors are Eric Fischl, Andrea McCafferty, Kat O’Neill, Matt Rubenstein, Matt Classens, and Mr. Mothes. Winners, who will be charged a $50 entry fee, will be announced on June 13 at 8 p.m.

New on the Circle
J. Mackey Gallery, a new exhibition space on the circle in East Hampton, serves as a backstop to the galleries lining the alley at Main Street from Park Place. It will open on Saturday with "The Deep End of Peace," a group show featuring  Lyndal Vermette, Emily Brown, Don Swanson, and Phyllis Baker Hammond . The show remains on view through July 5.

Past Deadline
Romany Kramoris Gallery will present the works of area artists Linda Capello, Christopher Engel, Muriel Hanson Falborn, Pingree Louchheim, and Diana Malcolmson, Thursday through June 10. An open house reception will be held on Saturday, from 1 to 5 p.m. A full listing will be provided in the next issue.