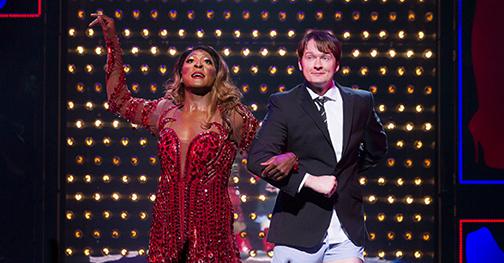 Matt Henry as Iola and Killian Donnelly as Charlie in "Kinky Boots" at London's Adelphi Theatre, which will be available to stream via Guild Hall.
By Mark Segal

Drama and Dancing
Guild Hall will premiere "Speed Kills in the Slaughter West," a one-person play by Ryan Campbell, one of its artists in residence, on Saturday at 7 p.m. The play stars Arianna Venturi as Wren Blair, whose first thoughts, as she experiences her most caustic and chaotic memories, are "The cathedral was on fire. I set the fire."

Mr. Campbell, who has an M.F.A. in playwriting from the Yale School of Drama, fuses idealism and world-weariness and the tension that follows holding opposing points of view simultaneously. He will join the program to answer questions about his residency and the play, which can be seen on Guild Hall's YouTube channel. Registration is on the website.

Twenty-eight screenings of a production of "Kinky Boots" from London's West End will be available from Wednesday through April 20 on Guild Hall's website. The musical features a score by Cyndi Lauper, a book by Harvey Fierstein, and choreography by Jerry Mitchell. Tickets are $15 and valid only for the time and date selected at the time of purchase.

On Perennials
"My Favorite 100 . . . Perennials I Wouldn't Garden Without," a Horticultural Alliance of the Hamptons talk by Tony Avent, a plant explorer, researcher, and horticulturalist from Raleigh, N.C., will take place via Zoom on Sunday at 2 p.m.

Mr. Avent will discuss his favorite perennials for Long Island, including little-known stalwarts as well as new creations from his extensive trials. A contributing editor at Fine Gardening magazine, he has written dozens of newspaper, magazine, and web articles in addition to his informative nursery catalog.

Tickets are $10, free for members.

Doc Fest Submissions
Submissions for Hamptons Doc Fest 2021, which will take place from Dec. 3 through Dec. 12, are now being accepted at filmfreeway.com. The feature category accepts works 41 to 180 minutes in length; shorts can be from 1 to 15 minutes. Only work completed after January 2020 will be considered.

Fees for the early deadline of April 30 are $40 per feature and $30 per short. For the regular deadline, June 25, the cost is $50 and $40, and the charges for the late deadline of July 16 are $65 and $45. A link to Film Freeway on the Doc Fest website leads to complete submission details. 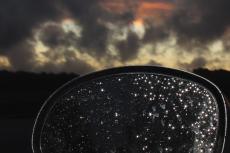 A Reminder From PSEG About Digging
Petition to Speed Up Sand Replenishment in Montauk
Artistic Portraits of M.L.K. Up for Auction on Saturday
END_OF_DOCUMENT_TOKEN_TO_BE_REPLACED