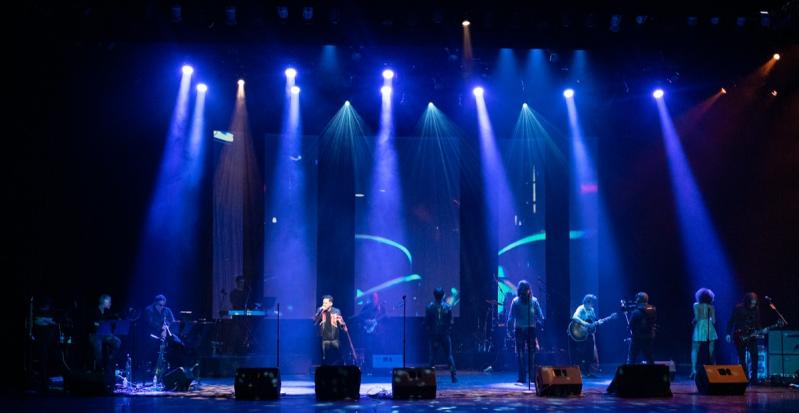 The Rock Project’s celebration of the Who’s “Who’s Next” album was shot at the Tilles Center for the Performing Arts.
The Rock Project Live
By Mark Segal

Thirty-one years after the album “Who’s Next” was released in 1971, Chris Roberts wrote for the BBC, “The Who’s fifth album is one of those carved-in-stone landmarks that the rock canon doesn’t allow you to bad-mouth. It was pretty rad for its day. Here’s the twist: it still sounds ablaze . . . there’s not much that isn’t thrilling about ‘Won’t Get Fooled Again’ and ‘Baba O’Riley,’ which howl and kick like they were born yesterday.”

Bay Street Theater in Sag Harbor, in partnership with the Rock Project, is celebrating the 50th anniversary of the album with “Reflections of ‘Who’s Next,’ ” a performance filmed at the Tilles Center for the Performing Arts that will be streamed Friday at 8 p.m. and remain available for viewing through Sunday.

Featuring four contemporary Broadway vocalists, Constantine Maroulis, Lana Gordon, Justin Matthew Sargent, and Michael Wartella, and the band Wonderous Stories, the show will include not only every track from “Who’s Next” but also such other iconic Who songs as “Pinball Wizard” and “Long Live Rock.”

Gary Hygom, a producer for the Rock Project, took pains to differentiate this concert from a tribute band performance. Mr. Hygom began to produce rock concerts when he was a producer at Bay Street and continued to do so as executive director of the Patchogue Theatre for the Performing Arts.

“The tribute shows are everywhere,” said Mr. Hygom, “and people turn up for them. One of the things I was missing most is that in so many of those you’ve got good musicians, but the vocal quality is very often -- not always, but very often -- not there.”

Having produced theater as well as music concerts, he has worked with many Broadway performers. Mr. Maroulis, a two-time Tony Award nominee, has appeared in “Jekyll and Hyde” and “Rock of Ages,” while Ms. Gordon’s credits include “Chicago” and “The Lion King.” Mr. Sargent starred in “Spider Man: Turn Off the Dark” and “Rock of Ages,” and Mr. Wartella’s resume includes “Charlie and the Chocolate Factory” and “Wicked.”

“In addition to getting topflight vocalists, we’re trying to impart more of what the songwriter really intended,” said Mr. Hygom. “No one’s trying to be Roger Daltry. We’re interpreting the songs, some of them in a different way, some as true as we can make them. That’s why I love having someone like Lana Gordon, who’s a killer vocalist, singing some of Daltry’s stuff.”

Mr. Sargent echoed Mr. Hygom. “You have to pay your respects to the people who created these sounds and this music,” he said. “But at the same time, doing an impression is definitely not the way to go. This team wanted to hire people from the Broadway community because we spend our entire careers trying to cultivate our own sound. We definitely bring our own flavor to it.”

“Reflections of ‘Who’s Next’ ” is the ninth Rock Project production. Each show begins with a director and a music director, much like theater, said Mr. Hygom. Then, the musicians and vocalists are engaged. Each show is created from the ground up. There was one day of rehearsal, one dress rehearsal, and then the show was filmed straight through at the Tilles Center, complete with projections, smoke, and pulsating lighting.

Mr. Hygom said the original plan was to tour the Rock Project’s shows, but his agent suggested starting with streaming. “The more I began to look into it, I realized it’s going to be sizeable, perhaps 20 percent of the industry moving forward. Some of the big music events, such as Bonnaroo and Coachella, have been making their shows available via streaming for years. The bands were originally leery of it, but they found out that it actually increased their audience base.”

The one thing he found tiresome about some streamed shows was that the performers were playing in their living rooms, recording studios, or empty clubs. “I decided ‘Who’s Next’ had to feel like a live concert and be shot like a live concert. A lot of streams are lit for the television camera. I didn’t want that. If the intense blue light blows out the camera, then that’s what happens. I wanted it to feel like you were watching a live concert in a venue, and I think we were able to achieve that.”

Tickets are $25, including fees, and can be secured through Bay Street’s website.