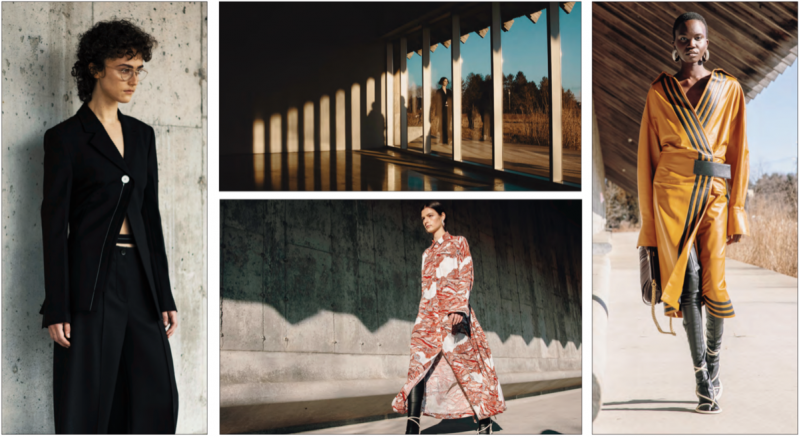 Proenza Schouler's designers shared their fall/winter collection during February's New York Fashion Week via a video they had made at the Parrish Art Museum a couple of weeks earlier. The video was the modeling debut of Ella Emhoff, Vice President Kamala Harris's stepdaughter.
Via Proenza Schouler
By Jennifer Landes

Lazaro Hernandez and Jack McCollough brought a lot of heat to mid-February when they dropped a virtual fashion show for their womenswear and accessory brand, Proenza Schouler, on New York Fashion Week's website, NYFW.com, and other platforms. The video was shot at the Parrish Art Museum earlier that month.

Although the backdrop of the museum and its Water Mill grounds provided drama for the designers' fall and winter collection, it was a model who really stole the show. Ella Emhoff, Vice President Kamala Harris's stepdaughter and an aspiring knitwear designer, made her runway debut wearing clothes for the brand. Just a few weeks earlier, she had caused a sensation in the fashion world when cameras first spied her in the Miu Miu coat she wore to the inauguration.

In the Proenza Schouler video, Ms. Emhoff's first appearance is in a coat too, a weather-appropriate choice given they were filming during the coldest weekend of the year, but also a clear nod to the splash she had made in the other coat.

During a conversation the model had with the designers that was recorded for New York Fashion Week, Mr. Hernandez recalled Inauguration Day and told her "when you showed up on TV, the texts were flying around the fashion community: 'Who's that girl?' There are very few moments in fashion when that kind of thing happens."

Ms. Emhoff said she first came to the attention of Ivan Bart, the president of IMG Models, a year ago during a small event in New York City for her stepmother, but she didn't sign with IMG until a week after the inauguration.

Mr. McCollough found it refreshing to see her face in such an unexpected situation and then to meet her and find out she's "a cool person . . . someone we could hang with."

Although she admitted she was nervous in her "first fashion experience," Mr. McCollough said she seemed like a pro, nailing her walks on the first take when other models were struggling. "The walk was major," Mr. Hernandez added.

The designers will share their collection video and discuss how the setting provided the perfect "intersection of art, fashion, architecture, and nature" to complement their collection with Kelly Taxter, the new director of the Parrish Art Museum, in a live-streamed talk on Tuesday.

They said making a video was challenging after having mastered live fashion shows over the first two decades of their history. Mr. Hernandez said the question became "How do you make a compelling video and short enough to sustain people's interest?"

Mr. McCullough noted that most people end up seeing their collections virtually anyway, given how few people can actually attend a runway show. "I don't really think it affected our process or the types of clothes we were making."

The designers told The Star in an email last week that "the pandemic has challenged us to work outside of our comfort zone, but it has been both challenging and rewarding to come up with creative new approaches to releasing a collection." It also gave them access to a larger, more global audience.

"For this season, we paired the collection video with a custom website (proenzaschoulerfw21.com) that allowed the audience to take their time with the details, and experience each look individually." They found the change "a rather fun and interesting experience and the lessons learned from that will stay with us."

The Parrish was always a building they had been curious about from afar, but had never entered. "When we gave our team the directive to scout locations that would feel in line with the mood and sensibility of the collection, the Parrish was presented to us as an option and we knew we had to make the trip out east and finally see it for ourselves, close-up and in person. When we did, we knew right away that it would be the perfect venue."

The designers pointed out that it was not the first time they had used a museum as a backdrop, having premiered their clothing lines previously at the Whitney Museum of American Art and the Met Breuer. "Many of our collections reference the art we might be inspired by at a particular moment, and we have done collaborations with artists Haim Steinbach and Isa Genzken -- whose work 'Two Orchids' is on view in the Museum's Field of Dreams exhibition."

They said the Parrish "felt like a natural fit in that way, but also aesthetically as we wanted to merge the beauty and textures of a cityscape with elements of softness and nature. The long exterior corridors felt right for the traditional format of a runway show, and the building's architecture complemented the natural light in a really beautiful way. It all just felt completely perfect for what we were looking to achieve creatively for the collection."

The Parrish's open fields in the front and rear of its building tend to trap wind, which no doubt added to the extreme conditions under which they filmed. Telling Ms. Emhoff it was under 20 degrees that morning, she nodded to the designers and said in the conversation video, "I could feel it."

The designers told The Star, "To say we had an arsenal of thermal blankets, heat machines, and hand warmers wouldn't be an exaggeration. Something about the intensity of the conditions gave the shoot a bit of an edge, and we are really proud of how the team came together to make it work. It was definitely a highlight of our year, working under unprecedented circumstances."

When designing the clothes, they "focused on themes of duality, recognizing the current cultural landscape while looking forward with a sense of optimism." They blended sharp tailoring with cozier protective knits and a feeling of craft. "We felt it was important to give the clothes a sense of ease to meet the moment we are all living through."

They said that two of their favorite accessories, which can be seen on the video, are the Pipe Bag, new this season, and the Shearling Rondo Slipper, an adaptation of a shoe that first appeared in their spring 2021 collection.

In their conversation with Ms. Emhoff, both designers said it was impossible to design the collection and not respond to what was happening right now, even if the collection won't be worn until six months from now. As such, they found inspiration in "reduction . . . the opposite of excess . . . bringing things down to earth."

They told The Star that Ms. Emhoff "felt like the right woman for this moment in time. She represents a kind of beauty and intelligence that feels completely of the moment. Her appreciation of fashion, while at the same time communicating a kind of social consciousness, is very inspiring to us."

Ms. Emhoff is in her final semester at Parsons School of Design and working on her thesis project. She has become known for her colorful knitwear and has raffled off custom pants to benefit For the Gworls and The Okra Project, two organizations that help Black transgender people in need. She told the designers she has been knitting for 13 years, but began taking it more seriously only recently.

Although Proenza Schouler has just opened a pop-up store in Greenwich, Conn., there are no immediate plans for a retail outlet here. It's not out of the question, however. The designers told The Star, "The Hamptons would definitely be a dream of ours," and cited customers who spend significant amounts of time here.

The Parrish presentation will be streamed from 5 to 6 p.m. and is free. Advance registration on the museum's website is required.