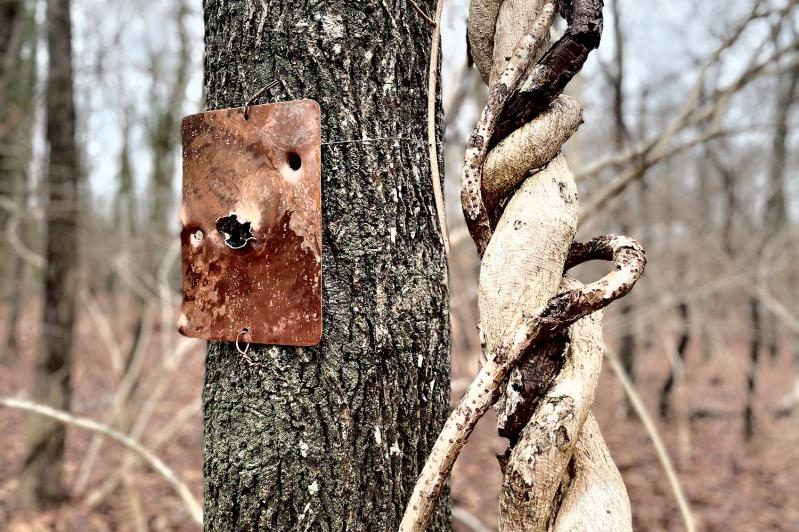 There are few more evocative winter experiences in the country than a solitary walk in the snowbound woods on a late afternoon. With a head full of Robert Frost and eyes taken up with the sheer atmospherics, it is an aesthetic and synesthetic experience on its own.

But the Arts Center at Duck Creek, in a short and simple wooded path on the east side of its property in Springs, has embellished it, and made the experience of a self-guided exhibition tour even more rewarding.

This is made possible through copper-plate pieces by Ryan Kitson. The artist is a native of the West Coast who spent 20 years in New York City before returning to his roots last year, teaching ceramics at Southern Oregon University and ethically hunting throughout the United States. He also found time to earn a master's degree at the Pacific Northwest College of Art.

Called "No Fillings for a Copper Plate," the installation consists of several two-dimensional copper plates (one embellished with aluminum). All but one are riddled with multiple holes made by bullets entering and exiting through either side. The holes rupture the picture plane, propelling the plates into the third dimension, even if only slightly.

These pieces, the size of standard road signs, are attached to trees along the path, some paired up and others alone. Without snow, the plates echo the color of the dead pine needles piled up along the path. In the snow, the copper color pops against the gray trunks and white ground. The holes in the surface can look like shot or otherwise violated flesh, whether in the deep inward hollows or the exploding outward bursts from the other side.

Inspired by the shot-up federal and state signs dotting property throughout the Western United States and in many other rural landscapes, Mr. Kitson said the tone of brash, unapologetic lawlessness inherent in the gesture was a misreading, or "at least more complicated than one assumes."

At the beginning of a new year and new presidential era, the country seems determined to remain divided. In this environment, subtlety has become rare, as have attempts to understand communities that differ from our own. Certain congressmen even say a civil war has already started, "We just haven't started shooting at each other yet."

These works would be on point for many discussions and debates currently taking place, but also work on historical grounds. Annual conflicts between hunters and animal activists over culling the deer herd come to mind, as well as gun rights versus gun control in general.

Of course, after Jan. 6 there's another more immediate context. With gunshots ringing out in the Capitol and police officers being impaled by poles flying the stars and stripes, these pieces produce an immediate visceral effect. They imply the tragedy that occurs when ideology meets flesh.

Mr. Kitson points out in the exhibition guide, a downloadable PDF describing the pieces and the aims of the exhibition, that the bullets used to shoot through the plates are also copper. This suggests to him that "the body of the victim and the body of the aggressor is the same."

With minimal means, the artist has crafted a sweeping yet subtle and moving message about our underlying commonality, despite the fissures between us.

Copper has other advantages in this setting. As the artist notes, the ease at which it oxidizes gives it an accelerated and exaggerated sense of time's passage. This imparts an aura of nature, history, or monumentality in the pieces. Long linked with etching and other intaglio printing processes, copper plates in this context tie into the history of art itself, bringing another connection into the deep and broad mix he has conjured up through these superficially unassuming works.

The exhibition guide shares examples of the bullet-ridden signs that inspired the series and the plates in a standard white-walled gallery setting. This provides a better perspective on how special and resonant this particular installation is and why it should move us out of our warm and comfortable "pods" and into the woods on a snowy afternoon, however briefly.

It will be on view through April 1, enough time to see it before and after the thaw.

Petition to Speed Up Sand Replenishment in Montauk
Artistic Portraits of M.L.K. Up for Auction on Saturday
Wine Tasting for Lions Club
END_OF_DOCUMENT_TOKEN_TO_BE_REPLACED