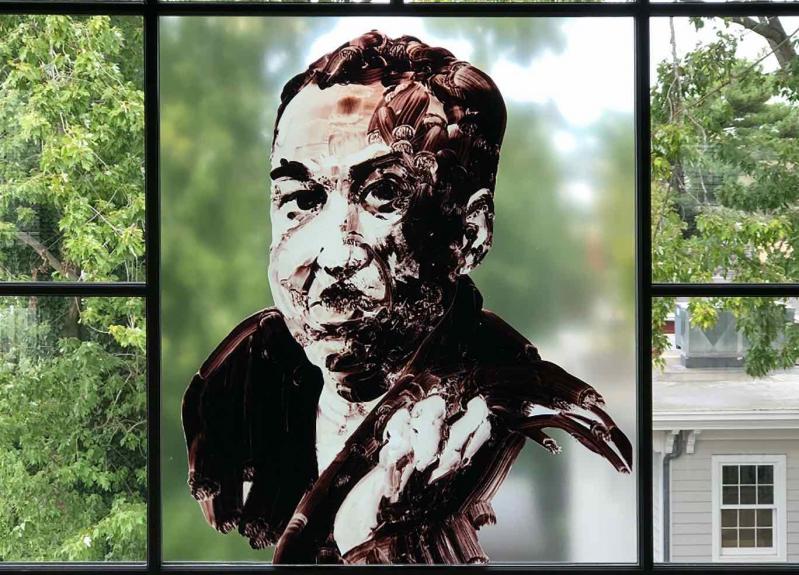 Eric Fischl’s window painting of Langston Hughes, the African-American writer who was a frequent guest of the Pickens family in Sag Harbor
By Mark Segal

While the East End is relatively quiet this winter, there are stirrings of activity in places old and new. At The Church in Sag Harbor, where Eric Fischl and April Gornik have transformed an old church into a multidisciplinary arts space with residencies, two projects have been progressing this month.

Two choreographers and three dancers from the Martha Graham Dance Company have taken up residence through Sunday. Using the main floor as a studio, the residents, The Church's first, are developing a project inspired by a 1952 work by Martha Graham, "Canticle for Innocent Comedians."

At the time, "Canticle" was described as Graham's ode to nature, but it was never filmed and has been considered lost. Drawing on the ideas and an outline of the original work, the two resident choreographers, Sonya Tayeh and Jenn Freeman, are working with three dancers, Lorenzo Pagano, Leslie Andrea Williams, and Jacob Larsen, to build the foundation for a new version of the piece.

The dancers will create solos and experiment with movement motifs that will eventually be expanded for a cast of 10. The completed new version of "Canticle" is expected to premiere in late 2021. Janet Eilber, the company's artistic director, is overseeing the rehearsals and the live-streaming of the process.

The Church is not open to visitors, but short videos of the rehearsals are available on its website and Instagram page.

Each week during February, The Church has been celebrating Black people known for their creative achievements with brief biographies on its website and portraits by Mr. Fischl and Ms. Gornik, the married artists who founded the facility. Two such honorees are the poet Langston Hughes and Amaza Lee Meredith, an architect.

Langston Hughes, a leading light of the Harlem Renaissance in the 1920s who also wrote plays and short stories, was a war correspondent during the Spanish Civil War and later wrote a weekly column for a prominent Black newspaper, The Chicago Defender. When not traveling the globe, Hughes was a frequent guest at the Sag Harbor Hills home of William Pickens II, whose family is among the village's most notable. Other prominent guests of the Pickens family have included Lena Horne, Ruby Dee and Ossie Davis, and Harry Belafonte.

Amaza Lee Meredith was a trained architect who worked primarily as an artist and art teacher because her race and sex prevented her from finding work in her chosen profession. In 1947, she and her sister, Maude Terry, began to develop a 120-lot subdivision in Sag Harbor called Azurest North. She and her friends then established the Azurest Syndicate, which led to the creation of the thriving African-American leisure community in Sag Harbor now enjoyed by its third or fourth generation.