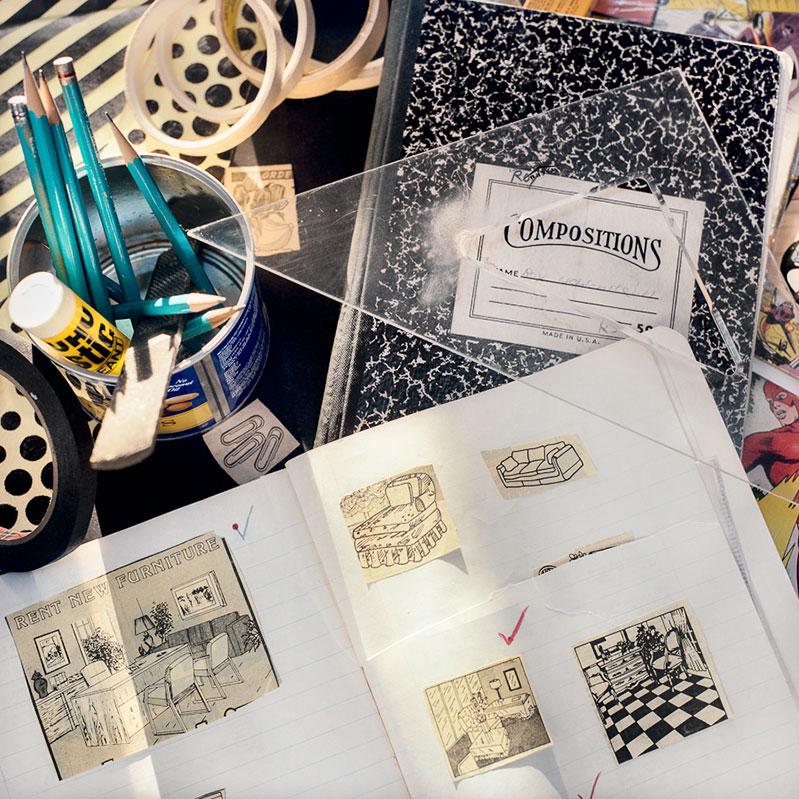 Three Photographers
An exhibition of photographs by Mary Ellen Bartley, Adam Bartos, and Laurie Lambrecht is on view at the Drawing Room in East Hampton through April 11. Inspired by an abbreviated residence at the library of Giorgio Morandi in Bologna, Ms. Bartley returned to her Sag Harbor studio and repeatedly photographed seven objects selected for their utility in the context of the pandemic.

Mr. Bartos is showing photographs documenting two dramatic East End locations, the Art Barge on Napeague and the Foster family farm, one of the oldest operating agricultural sites in Sagaponack.

Ms. Lambrecht’s photographs range from a 1991 image of materials in Roy Lichtenstein’s studio to her recent studies of gardens and trees, which she prints on linen before cutting the cloth into strips and weaving them into abstract compositions.

Bullet Holes at Duck Creek
“No Fillings for a Copper Plate,” an installation of work by Ryan Kitson, is open daily from dawn to dusk on the grounds of the Arts Center at Duck Creek in Springs through April 1.

The installation consists of a series of 10-by-7-inch copper sheets, whose sizes replicate those of typical “no hunting” or “no trespassing” signs, placed on trees around the site. Each sheet has been shot with copper-jacketed bullets, leaving holes instead of legalese.

“The sensitivity of the material to oxidation shows an exaggerated passing of time, which embeds it more firmly within the context of nature and the outdoors,” said the artist, who divides his time between Oregon and hunting ethically throughout the United States.

Mr. Kahn paints dreamlike landscapes, some with naked figures in repose, whose surreal tone is rendered with intricate detail, “giving shape to the elusive character of the subconscious through natural forms,” according to a release.

The exhibition takes its name from the artist’s 1986 painting of the same name, which depicts two figures, one facing forward and holding a second figure who is horizontally outstretched, as if levitating.

Bleckner at Van de Weghe
The Van de Weghe Gallery in East Hampton is presenting an exhibition of Ross Bleckner’s large-scale stripe paintings from the 1980s, on view through March 25. Created during the height of the AIDS crisis, the stripes, both optical and ethereal, are infused with a sense of loss. In one, “Sex of Angels,” “the missing subject [is] underlined by a ghostly halo . . . a remnant of a lost soul,” says the gallery.

All the works in the exhibition were included in Mr. Bleckner’s 1994 mid-career retrospective at the Guggenheim Museum.

Online Auction
MM Fine Art in Southampton is hosting an in-person viewing for the Southampton Art Auction of postwar and contemporary paintings, photography, and prints. Works can be seen at the gallery tomorrow through Sunday from 11 a.m. to 5 p.m. The auction, which is accessible on the website of Live Auctioneers, will conclude on Wednesday.

Art and Technology
Colin Goldberg, an artist whose work combines computer-generated imagery with gestural painting that refers to Abstract Expressionism, will host “Creative Intentions III: Art and Technology,” a virtual talk exploring the intersection between art and technology, on Wednesday at 3:30 p.m. Presented by the Pollock-Krasner House and Study Center, the program will also allow participants to share their own work related to the theme. A registration link is on the study center’s website.