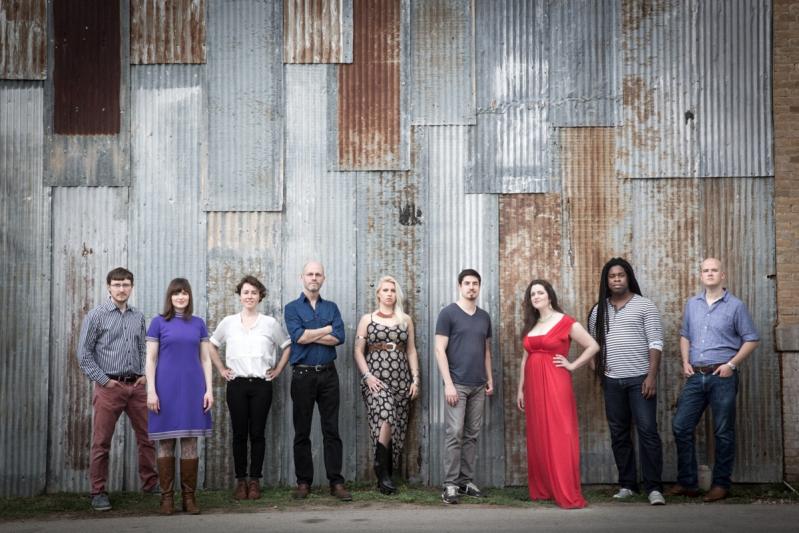 Roomful of Teeth will explore the boundaries of the human voice in a performance at The Church in Sag Harbor.
Bonica Ayala
By Mark Segal

The Met’s ‘Eurydice’
The Met: Live in HD will make its final appearance at Guild Hall this year with its new production of "Eurydice" on Saturday at 12:55 p.m. In 2015, the composer Matthew Aucoin asked the playwright Sarah Ruhl to work with him on a new opera inspired by the Orpheus myth. Instead. they adapted her 2003 play, "Eurydice," reimagining the myth as a contemporary story.

Yannick Nezet-Seguin conducts the production, which has received a new staging by Mary Zimmerman. Erin Morley, a soprano, sings the title role opposite the baritone Joshua Hopkins as Orpheus.

The telecast will be preceded at 11 a.m. by a free program from Bel Canto Boot Camp, whose co-founders will explore the varied settings of the ancient legend of Orpheus and Eurydice.

Produced by the LGBT Network and edited by Adrian Stivala and Kerrie O’Neill, the film follows Michael Barcham, Georgie Hartman, Phil Hauser, Franz Jungi, and Eve Weinberg as they face such issues as the AIDS crisis, defining family, marriage, and self-discovery.

After the screening, all five will participate in a discussion moderated by Mr. Stivala. The program will take place at the museum and via livestream. Tickets are $15, $5 for members and students, and free to members of the LGBT Network. The streamed program is free.

Ms. Feldshuh, a six-time Tony and Emmy Award nominee, will reprise the title role of Mark St. Germain’s play. After previews, the play will run from Dec. 16 through Jan. 2 at the museum’s new theater in Battery Park City.

The production is again directed by Scott Schwartz, Bay Street’s artistic director. Tickets, which start at $59, are available from the Bay Street box office.

Bay Street is now accepting submissions for its eighth annual "Title Wave: 2022 New Works Festival" through Dec. 24. Information about the submission guidelines can be found on the theater’s website or by emailing Hope Villanueva at [email protected].

Casting Call From LTV
LTV has issued a casting call for five actors aged 16 and older for a new play by a well-known author that will be presented in May 2022 at LTV Studios in Wainscott. The monologue-style play is about suicide and mental health. Directed by Valerie diLorenzo, rehearsals will begin in late April.

Participants, who must be fully vaccinated, have been asked to prepare a short contemporary monologue and to bring a photo and resume. Cold reading from the script will be required.

Audition dates are Sunday, 2 to 4 p.m., and Monday, 6 to 8:30 p.m. Applicants will be seen in the order of arrival; appointments are not available.

The evening will feature Dan Naturman, a regular on the HBO series "Crashing" and a guest on "Late Show with David Letterman" and "Conan"; Sandy Marks of "King of Queens" and HBO’s "Comedy in the Park," and Marion Grodin, a sitcom and screenwriter who has performed on "The Joy Behar Show" and at the Gotham Comedy Club.

Tickets are $30. Cocktails and dinner specials will be available before and during the show.

Music at The Church
Roomful of Teeth, a Grammy Award-winning vocal octet dedicated to reimagining the expressive potential of the human voice, will perform at The Church in Sag Harbor on Wednesday at 6:30 p.m.

Founded in 2009, the group was incubated at the Massachusetts Museum of Contemporary Art, where its members studied with performers, teachers, and composers known for innovation, learning that "the boundaries of the human voice are never what they seem," according to their website.

Tickets are $35 and can be purchased from The Church’s website.

Artists Up Close
In Process @ the Watermill Center, the ongoing series of open rehearsals, workshops, talks, and studio visits with the center’s resident artists, will feature Pawel Althamer, an artist based in Warsaw, and the musicians Michael Foster and Ben Bennett, next Thursday at 5:30 p.m.

Mr. Foster, a saxophonist, and Mr. Bennett, a percussionist, seek to probe the history and limitations of the tradition of the free jazz duo by interjecting elements of performance, silence, space, and density.

Free reservations can be made on the center’s website. Attendees must be fully vaccinated and present proof of vaccination on check-in.

Classical Guitar
The Montauk Library’s series of virtual visits with artists and musicians in their studios will feature "The Guitar and Cuba, France, and Haiti," a 30-minute video of Francisco Roldan, a classical guitarist, that will be available on demand starting Wednesday at 7:30 p.m. and continue through Dec. 31.

The Popsicles in Sag
Next up in the music series at the Masonic Temple in Sag Harbor is the Popsicles, performing original and blues/country songs tomorrow at 7 p.m. The band consists of Carolyn Blackmar, vocals, Job Potter, guitar and harmonica, Steven Skoldberg, piano, and Jeffrey Marshall, percussion.