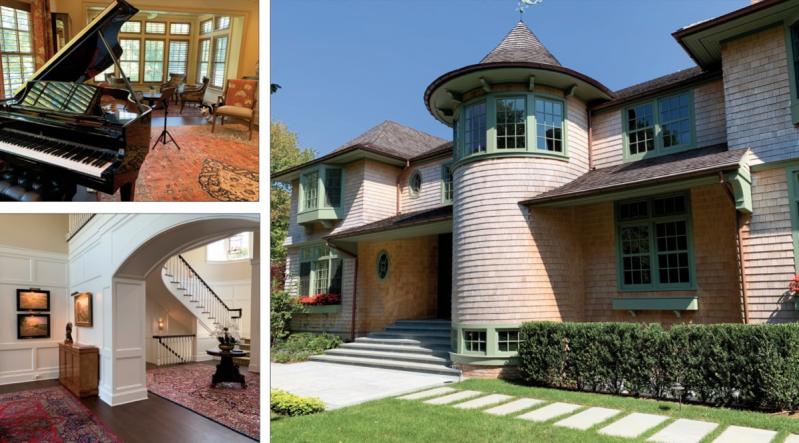 Although Joseph Bell and Peter Longo's house is new construction, the exterior offers details such as a turret, a curved and shingled facade, and eyebrow windows. Inside, the music room, top left, which is filled with sunlight in the morning, is a refuge for the homeowners. The couple's extensive art collection, above left, is evident throughout the house.
Durell Godfrey Photos
By Sarah Alford

Walking up to the home of Joseph Bell and Peter Longo -— with its turret, curved and shingled façade, uplifting roofline, and copper downspouts —- it is easy to imagine you have stepped back in time: It is evening in East Hampton Village and the painter and printmaker Thomas Moran and his elder brother, Edward Moran, the maritime painter, are expected for dinner. The house was recently constructed, yet it resonates with the Shingle Style of the late-19th century.

“We both love art and share a deep appreciation for local artists and history,” said Mr. Longo during a visit to the David’s Lane house this week. On display in their new abode are more than 80 paintings from their collection, which includes work by the Morans as well as several other notable East End artists. The couple loaned an Edward Moran painting, c. 1890, titled “Lost at Sea: The Buoy” to the East Hampton Historical Society for an exhibit this summer, “The Sounding Sea: The Art of Edward, Thomas and Mary Nimmo Moran.”

“I was there the day it arrived,” said Joseph Aversano, who lives not far away and is a member of the historical society’s board of trustees. “It is the most exuberant painting, right down to every brush stroke.” The painting depicts a buoy straining against the tempestuous chop of waves. It now hangs in Mr Bell’s and Mr. Longo’s serene living room.

The Shingle Style is recognizable as the classic architectural mode of the summer colony in the era of McKim, Mead, and White; it was most popular in the seaside towns of Long Island and New England. While more rustic —- and less ornate —- than some architectural fashions of that time, the Shingle Style nevertheless had a rustic grandeur, as can be witnessed with a slow drive past the so-called cottages of Lily Pond Lane and Lee Avenue.

In the context of Mr. Bell and Mr. Longo's house on David’s Lane, the turret is less reminiscent of a castle’s and instead has the aura of a lighthouse: The upper row of windows that encircle it resemble a lighthouse’s lantern room.

Inside, extensive millwork and coffered ceilings carry out the atmosphere of a bygone era. Fireplaces in several rooms, including the library and dining room, harken back to a time when one might light a good oak fire to take the edge off a chill November afternoon. Clerestory windows and double-height ceilings on the first floor allow for natural light and ample wall space to showcase the impressive art collection. Eyebrow windows (another nod to the era of the Morans and Stanford White) on the shingled poolhouse are a charming detail when glimpsed from the kitchen.

Mr. Bell and Mr. Longo sought to maintain the comfortable feel of an older home in their new one, while creating more space for family and friends. Situated on 1.4 acres, the five-bedroom house rests on a knoll that gradually slopes toward the Nature Trail; occasionally, ducks and turtles meander up to explore their yard. Before embarking on the adventure of designing their new home with the East Hampton architects Robert Ortmann and Michele Hugo, they lived for five years in an old cottage on the site. They met while in law school at the University of Virginia and recently celebrated 41 years together. They married in the backyard at David’s Lane in 2012. The pair were partners in a law firm and currently are principals of LB Belon, an investment company focused on health care facilities.

Like many who come to visit and find themselves going local, Mr. Bell and Mr. Longo rented on David’s Lane before they bought. They found they enjoyed the proximity to the shops of Main Street and the rumble of the Atlantic Ocean waves in the not-too-far distance. The original house dated to the 1930s and had never been fully winterized. Mr. Longo said that he had appreciated its pedigree, as it was once owned by a Wall Street tycoon and physicist named Alfred Lee Loomis, who is credited with inventing the Long Range Navigation System (LORAN), an important radar tool used for navigation during World War II. A statue of Loomis’s second wife, Manette Hobart, who worked in his research lab before moving to East Hampton, is on the grounds of Ladies Village Improvement Society, he mentioned. It is details like this that make clear just how keen an interest the couple have taken in the history of the village.

They broke ground in November of 2019 and forged ahead until the Covid-19 shutdown delayed progress for a painful period of about 10 weeks. Mr. Bell attributed the eventual triumph over this hurdle to the efforts of the architects, who are partners in Zwirko, Ortmann, & Hugo of Pantigo Road. In addition to, of course, warmth in winter, the creature comforts lacking in the old house —- but afforded by the new construction —- include a wine cellar, screening room, and gym with steam room and sauna on the lower level.

The music room is one of Mr. Longo’s favorite spots. During the worst of the pandemic, he returned to his study of classical guitar. A climate-controlled case for his guitar hangs beside a Steinway piano that is configured like a player piano to play songs from its repertoire. A sitting area on the eastern end of the music room fills with sunny rays in the morning (as did a favorite room in the original cottage).

Having renovated their New York City apartment twice and an apartment in Paris once, they recognized the importance of wiring for picture lights during construction. Mr. Bell said that he particularly enjoyed the hushed glow in the evenings when overhead lights are dimmed and the paintings illuminated.

Getting the display of the art collection precisely right was a process in itself. A friend in Paris was able to pack and ship 30 paintings that the couple had not been able to retrieve for ages, due to Covid-19 restrictions. Then, it "took two weeks to group the paintings and decide where they should be hung,” said Mr. Bell. Mr. Longo worked out the placement with their interior designer, Ellen Guiling, and another friend.

That Mr. Bell and Mr. Longo have opened their home for the East Hampton House & Garden Tour (to be held on Saturday from 1 to 4:30 p.m) is another indication of their seriousness about local history: The tour, which includes access to four other houses, in addition to theirs, has long been one of the primary fund-raisers for the East Hampton Historical Society.

Tickets for the self-guided event are $75 in advance and $85 on the day of the tour. A preview cocktail reception at the Maidstone Club will be held on Friday evening from 6 to 8; tickets to the party are $200 apiece. Those wishing to witness Mr. Bell and Mr. Longo’s intertwining of past and present, new and old, can find more information at easthamptonhistory.org or by phoning 631-324-6850.