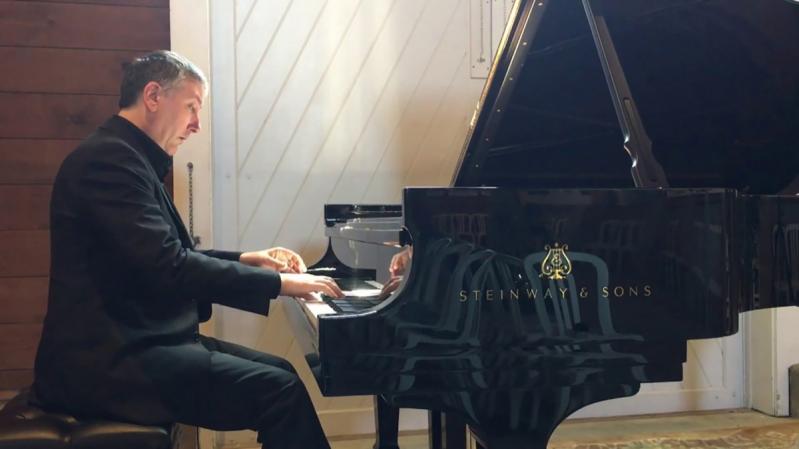 A 30-minute video from the Montauk Library of a concert of traditional songs will feature Gil Goldstein, above, and Paolo Bartolani.
John Abbott
By Mark Segal

Virtual Concert
"Between the Wind and the Shrubs," a 30-minute video concert featuring Gil Goldstein, an accordionist, and Paolo Bartolani, a pianist, will become available for streaming on demand from the Montauk Library's website starting Wednesday at 7:30 p.m. and continuing through Dec. 31.

Mr. Goldstein, who is also a pianist and arranger, has composed scores for films and has won five Grammy Awards. Mr. Bartolani, the founder and director of the Rites of Spring Music Festival in Southold, performs with chamber ensembles in Europe and the United States.

The concert, which was recorded at the Jamesport Meeting House on the North Fork, includes new arrangements of traditional songs such as "Danny Boy" and "Amazing Grace" as well as compositions by Dvorak, Debussy, and Morricone.

Classical Recital
Susanna Phillips, a lyric soprano, will give a "recital in praise of simple gifts" on Sunday at 3 p.m. at the East Hampton Presbyterian Church. Ms. Phillips earned the Metropolitan Opera's 2010 Beverly Sills Artist Award and has appeared with the Royal Stockholm Philharmonic, the Chamber Music Society of Lincoln Center, and symphony orchestras in Baltimore, Chicago, San Francisco, St. Louis, Atlanta, and Milwaukee, among others.

Ms. Phillips will be accompanied by Steve Salerno on guitar. The suggested donation is $25.

TV Then and Now
Knowledge Fridays, a new monthly lecture series at The Church in Sag Harbor featuring experts in a variety of fields, begins Friday at 6:30 p.m. with a talk by Bill Persky, a five-time Emmy Award-winning writer, director, and producer.

Mr. Persky, who will speak about television's development from the 1950s to the present, has promised "a deep dive into media with stories about the stars and shows you loved and some you might have hated."

The recipient of a Lifetime Achievement Award from the Writers Guild of America, his many credits include "The Dick Van Dyke Show," "That Girl," "Kate and Allie," and "Who's the Boss?" as well as five films for television and a theatrical feature.

Holiday Auction
Bay Street Theater in Sag Harbor will hold a Holiday Silent Auction starting Sunday and continuing through Dec. 2. Organized in place of the in-person auction typically held during the theater's annual summer benefit, the holiday auction will be available for bidding 24 hours a day via the auction link on the Bay Street website.

Among the items, experiences, and travel packages are memorabilia autographed by Julie Andrews, Ruth Westheimer, Jerry Seinfeld, and Colin Quinn, a weeklong trip for four to St. Barths, a one-on-one Zoom session with Isaac Mizrahi, gift baskets and gift certificates from local businesses, private lessons and workshops, memberships to museums and exercise studios in the area, and many more.

Rising Piano Star
Do-Hyun Kim will give a piano recital at the Southampton Cultural Center on Saturday at 6 p.m. Mr. Kim has won top prizes at the Busoni Competition in Bolzano, Italy, the Chicago International Music Competition, and the 2017 Young Concert Artists International Auditions, among others.