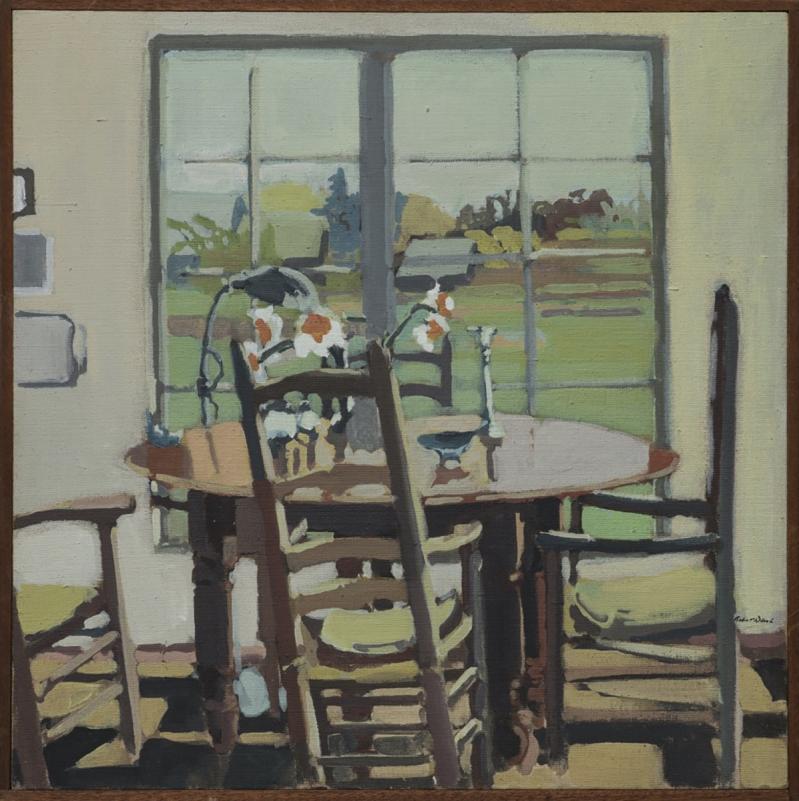 Robert Dash’s “Dining” from 1972 is on view at the Madoo Conservancy.
By Mark Segal

Robert Dash Acquisitions
Since the 2013 death of its founder Robert Dash, the Madoo Conservancy in Sagaponack has been augmenting its own holdings of his works through purchase or donation. "Robert Dash: New Acquisitions," on view through Dec. 11, brings to light several important paintings.

Among the works is an untitled piece from 1961 that was the cover image from Dash's first show at Barone Gallery. Other acquisitions are "Dining, Spring" (1971), which depicts the dining room of Madoo's Summer House, and "Untitled (Arbor at Madoo)" from 1970, which shows a long-gone arbor and the original white trim and brown shingle color of the Summer House.

"We don't have many paintings depicting Madoo," says Alejandro Saralegui, the conservancy's director. "These paintings in particular document the story of Madoo in a visual manner, making them very desirable to us."

New at The Ranch
"I Can Close My Eyes in a Dark Room," an exhibition of 14 recently rediscovered paintings by Forrest Bess, is on view at the Ranch in Montauk through Dec. 18.

Bess, who died in 1977, lived in virtual isolation in Bay City, Tex. After a 1934 trip to Mexico, where he watched the muralists David Alfaro Siqueiros and Diego Rivera at work, he built his first studio. He exhibited in museums in Texas in the 1930s, and, after a visit to New York, developed friendships with the art historian Meyer Shapiro and Betty Parsons, who arranged six solo exhibitions at her gallery between 1949 and 1967.

He termed himself a visionary painter, "for lack of a better word," creating small-scale abstract paintings that featured recurring cosmological signs like stars and runes alongside sexual imagery that reflected his engagement with fluid gender identity.

Printing Workshop
The Southampton Arts Center will offer a silk-screening workshop and a free curator-led tour of its current exhibition, "Clearing the Air," on Saturday afternoon. The show examines the healing and transformative power of the arts with work by more than 40 regional and national artists who turned to the arts to overcome health and personal challenges.

The workshop will be conducted from noon to 5 by Jef Scharf, whose work is included in the exhibition. Participants will design, translate, and print images onto shirts and/or paper. Each person will take home two shirts and a print. Tickets, available on the center's website, are $35, $25 for members.

The 3 p.m. tour will be led by Jay Davis, an artist and the curator of Memorial Sloan Kettering Cancer Center's Ambulatory Care Arts Program.

Exhibition Tour
Alicia Longwell, the chief curator of the Parrish Art Museum in Water Mill, will lead a tour of the museum's three recently opened exhibitions of work by peter campus, Virginia Jaramillo, and John Torreano on Friday at 6 p.m.

"when the hurly burly's done," Mr. campus's exhibition, features nine continuous video loops, presented on separate screens, that invite the viewer to meditate on the beauty of the natural and the ordinary.

"The Harmony Between Line and Space" includes five new paintings by Ms. Jaramillo, a pioneering minimalist who creates her work from sources that span histories and cultures.

Mr. Torreano reflects on the mysteries and wonders of the cosmos in "Painting Outer Space/Inner Space, 1989 to Present." The 10 large paintings on view were inspired by images transmitted by the Hubble Space Telescope.

Tickets are $12, free for members and students, and advance registration via the museum's website is required.

Holiday in Montauk
Lucore Art in Montauk will present the work of four artists in its first holiday show from Sunday through Jan. 10, with a reception set for Nov. 27 from 4 to 7 p.m.

Donna Corvi, who spends part of each summer at the Art Barge on Napeague, focuses on trees, branches, wind, and the natural environment. John Tuttle is an impressionist whose scenes resonate with light and color. George Olsen and Christopher Lucore create hard edge, color field paintings that focus on color, shape, line, and texture.