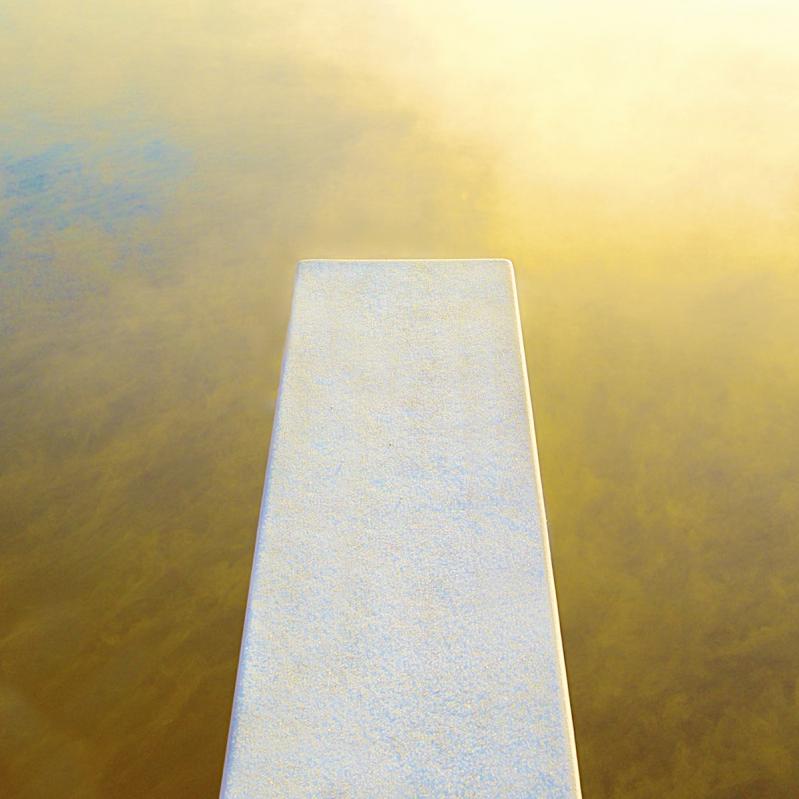 Lynn Savarese’s photograph “Dive In” is on view at the White Room Gallery.
By Mark Segal

Tile Club Talk
The Tile Club was a group of 31 notable New York artists, sculptors, and architects, among them William Merritt Chase, Stanford White, and Winslow Homer, who met in the late-19th century for camaraderie, to paint on ceramic tiles, and to travel together on sketching trips.

Guild Hall will present "The Tile Club, Then and Now," a free discussion about the original Tile Club as well as its contemporary re-imagination, the Neo-Tile Club, next Thursday at 6 p.m. The Neo-Tile Club has been conceived by Scott Bluedorn for his 2021 Guild Hall Community Artist-in-Residence project.

Bottles and Skyscrapers
An exhibition of paintings by Carl Scorza, who divides his time between East Hampton and New York City, is on view at Colm Rowan Fine Art in East Hampton through Nov. 28.

The paintings are devoted to the visual vocabulary of liquor bottles and their labels. The series originated from his experiences and observations around the World Trade Center and the skyscrapers of Lower Manhattan. As an exercise, in 1998 he sketched an arrangement of bottles that echoed the skyline.

He discovered that painting, unfinished, 20 years later, and began the present series. "The apparent straightforwardness of Carl Scorza's paintings belies the complex nature of their structure," writes Mr. Rowan in a catalog essay.

Miles Jaffe Video
"On the Nature of Art: The Work of Miles Jaffe," a 12-minute video created by the artist, will stream on demand from the Montauk Library's website beginning Wednesday at 7:30 p.m. and continuing through Dec. 31.

In the video, Mr. Jaffe demonstrates in his Bridgehampton studio some of the techniques and materials he uses to create his art, which critiques the profit-driven art market and other issues that affect artists and the value of their work. His art combines the iconoclasm of Andy Warhol, Marcel Duchamp, and Banksy with the satirical edge of James Thurber or Jonathan Swift, according to the library.

A Moody Sag Harbor
A solo show of work by Barbara Hadden, who paints the houses, streets, shops, and farms of Sag Harbor, is on view at Romany Kramoris Gallery in that village through Nov. 29. A reception is set for Saturday from 5 to 6:30 p.m.

Ms. Hadden has cited Edward Hopper as a source of inspiration. Devoid of human figures, her subjects, while familiar to those who know Sag Harbor, are touched with mystery and melancholy, qualities counteracted by her bright palette.

New at White Room
"State of the Art," a group exhibition, will open Thursday at the White Room Gallery in Bridgehampton and remain on view through Dec. 5. The aim of the show, says the gallery, is "to present a sampling of mediums and points of view."

The exhibition will include paintings by Giancarlo Impiglia, Tony Sjoman, Sylvia Perrin, and Nelson De La Nuez, photographs by Bob Tabor and Lynn Savarese, and glass works by Trefny Dix and Benght Hokanson.

Wilson's Ethereal Landscapes
Next up in the Southampton History Museum's series of online webinars about influential 20th-century residents of that town is "Jane Wilson: Artist of the Ethereal," which will happen via Zoom next Thursday at 11 a.m.

Wilson, who came of age as Abstract Expressionism was ascendant, experimented with abstraction but followed her own path, which led her to landscape painting. A resident of New York City and Water Mill, in the early 1980s she developed the approach for which she is best-known today, luminous works whose big skies hover between abstraction and representation.