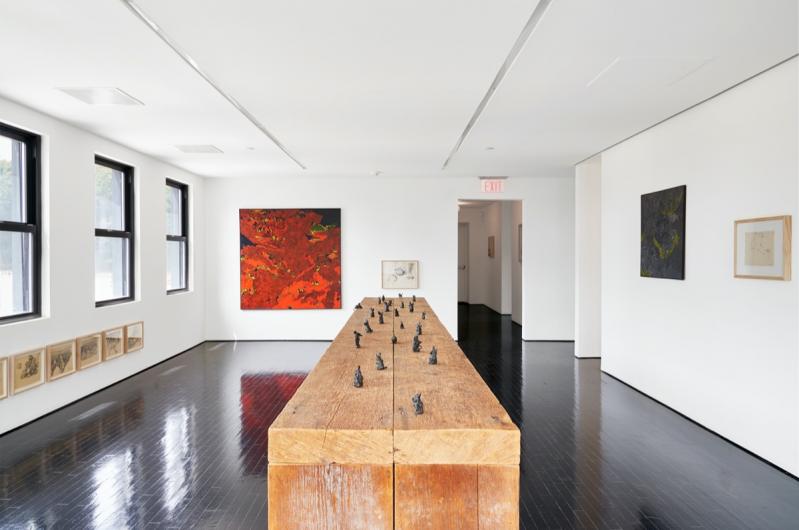 Paul Thek's painting "Sicily" mixes freely with a variety of his works from other periods and other mediums, such as objects from "The Personal Effects of the Pied Piper," on the table in the foreground at the Watermill Center.
Martyna Szczesna
By Jennifer Landes

"Paul Thek: Interior / Landscape," an exhibition now on view at the Watermill Center, is an event much in the way that all of the center's visual arts presentations are. Although the center and its founder, Robert Wilson, are more associated with the performing arts, they have always had a hand in the other discipline, including set designs for Mr. Wilson's productions and the friendships he forged with many artists over the years.

Thek is one of those collaborator friends, having worked with him on some of his earliest productions. In turn, Mr. Wilson was executor of the estate of Thek, who died of AIDS in 1988. The exhibition, which takes up two galleries on two floors, is drawn from the center's permanent collection and encompasses works and archival documents that have never before been seen by the public. It is being presented on the 40th anniversary of the beginning of the AIDS crisis in New York, an event in full.

As solemn of an occasion as it might be, the work displayed here, while often ponderous, is less so. In works spanning four decades, the mix goes from dark, penetrating interior psychology to bright colors and diverting forms in so much variety that viewers can always find something to engage them among the very different objects.

Owen Laub and Noah Khoshbin served as curators for the show, which is accessible on Saturdays by reservation on Eventbrite. They bring together an assemblage that includes some standout breakthrough works, but the overall effect is more like one of Thek's museum installations. Everything seems to go together, but in ways that keep viewers on their toes.

The artist's production of dual pieces, often the inverse of each other, are placed not side by side but hanging, in ways, such as behind each other on the opposite sides of the same wall, that reward those paying attention. The mirroring continues in the placement of drawings and how his "meat cables" continue from floor to floor.

The exhibition begins early, with works inspired by a 1963 trip the artist, who was 30 at the time, made to Rome when he was just receiving recognition.

A work such as "Sicily," which while abstracted suggests the interior parts of bodies (or possibly the blood lost on the land because of its violent history), became a precursor to his series "Technological Reliquaries." Its companion piece from the same time frame, "Fjaerlands," on loan from a collector, is a cool opposite, using dark charcoals and blacks tinged with mossy greens to depict the rocky and hilly terrain.

The reliquaries, such as "Untitled (75)," from 1964, feature casts that resemble meat or body parts placed within a glass vitrine, the way a saint's bone shard or other holy relic would be kept. This one is marked with the applied number 75. The reliquaries refer back to Thek's complicated but devout Catholicism, which was a continual presence in his work.

A fluffy white feathered cross, set up against a brick wall backdrop, makes a striking contrast and highlights the implied ephemeral nature of the piece. The feathers might as easily suggest a feather boa from an exotic performance rather than something divine or heavenly. Their embrace of the holy symbol, however, and the effect of floating weightlessness they achieve demonstrate a softer personal embrace of religion and not a parody of it, as would be the easy quick take.

The curators write that Thek "at times described his practice of making not in terms of subjective authorship, but as being a vessel through which the divine might flow, if presented with the right circumstances."

The implied flesh in the vitrines, either looking like meat or casts of his own body, are rich with both classical and modern associations. In these works, he mines old Western religious tradition for new ways of expressing the body's transience and decorative qualities as a thing to be cast aside by the spirit in death. He often used mediums in his work, like wax or latex, that would eventually break down to underline this temporal reality.

Yet he was still a member of the New York art scene, and his reliquary that combines one of his meat pieces and a painted Brillo box (not in the show) is a very meta reflection on and reaction to both Pop Art and Minimalism.

Thek ended his early series of "meat pieces" with 1967's "The Tomb," an installation in which his own body was replicated for viewers to mourn. Suggesting flesh and using materials subject to decomposition, his works are similar in nature to contemporaries such as Joseph Beuys and Dieter Roth.

He would walk away from and come back to similar themes throughout his life. "Ferocious," another vitrine piece, this time from 1971, depicts some kind of animal, a wolf or maybe a coyote, as a sly reference to Beuys, made up of what looks like raw clay and entrails, with a feather, real twigs and leaves, and fake pine fronds.

The titles of the 1980s abstract paintings "Dust," "Orange Squiggles," and "Three Yellow X's" refer back to their content much in the way the earlier place paintings do. A series of paintings hanging low with small chairs set in front of them with fancy frames and picture lights are clearly less about their content and more about how we value and consider what is art.

Mike Kelley's observation that Thek was not a museum-friendly artist was in mind when looking at these works. "One of his work's great strengths, because of its mutable and nonauthorial nature, is how much it challenges the museum's preconceptions of what an artwork should be," he wrote in an essay for Artforum.

The artist's cast-bronze, toy-sized animal pieces with the title "The Personal Effects of the Pied Piper" refer to a larger installation that recreated an encampment of the Pied Piper in the woods. Set up without context on a long, rough-hewn table, they look disconnected, but still fit in this setting.

There are other surprises, including quite a number of pencil drawings of landscapes, people, objects, and interiors. These reveal virtuosity and lyricism, maybe even some sentimentality. Some of these are very early, from the 1950s and predating what would become his more mature work. Yet another block is from the 1970s, well past it.

Contradictions such as these are summed up well by Kelley, a Los Angeles-based artist who died in 2012 and worked in ways similar to Thek a generation later. Despite being put off by his mystical overtones, he praised Thek for his "mixture of free-associative word and image play, complex material usage, and formal and conceptual rigor."

The exhibition remains on view through Nov. 14.