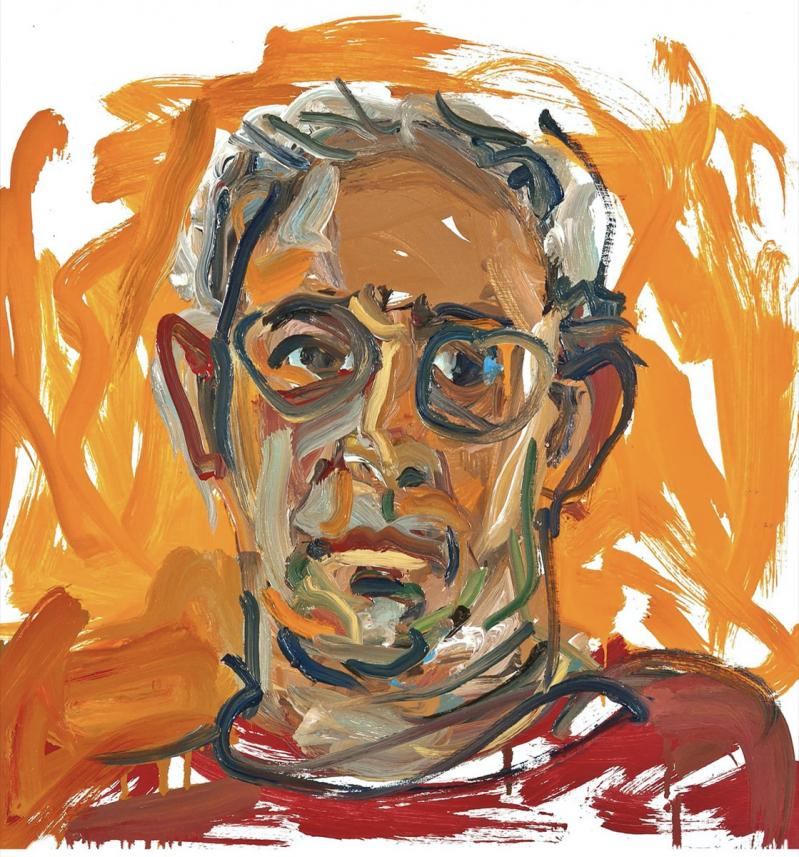 The artist Jon Imber painted more than 100 portraits of family and friends, including this self portrait, over a four-month period after he was diagnosed with A.L.S.
By Mark Segal

The Southampton Arts Center will present two programs this weekend in conjunction with its exhibition “Clearing the Air,” which focuses on the healing power of art as a means of therapy, escape, distraction, and reflection.

In partnership with Hamptons Doc Fest, on Sunday at 4 p.m. the center will screen “Imber’s Left Hand,” a documentary by Richard Kane about the painter Jon Imber and how he adapted to a diagnosis of Amyotrophic Lateral Sclerosis.

Imber taught figure drawing at Harvard for 27 years before being diagnosed with A.L.S. in 2012. Determined to continue to work as an artist, with the support of his partner, Jill Hoy, he learned to paint with his left hand and then with both hands as his condition deteriorated. During a four-month span before his death in 2014, Imber drew over 100 portraits of family and friends.

A review in Maine’s Portland Press Herald called the film “a masterpiece of intimacy in the face of tragedy . . . an extraordinary accomplishment in film. It is the eulogizing of the creative force and artistic life of one of America’s leading painters -- in his own vibrant voice.”

The screening will be followed by a discussion with Ron Hoffman, founder and executive director of Compassionate Care ALS, and Andrew Botsford, a writer, actor, director, and president of the Hampton Theatre Company in Quogue. Tickets are $15, $10 for center members.

Alice Momm, whose artwork is included in “Clearing the Air,” will talk about her working process and non-hierarchical approach to materials on Saturday at 12:30 p.m.

Ms. Momm’s work emerges from “a deep desire to reintegrate the natural world into my life.” Her artworks, whether exhibited outdoors or scaled for interiors, are constructed from items gathered on her walks, both in New York City and while traveling. Leaves, scraps of bark, winter branches, and pine needles are among her materials.

After the talk, the artist will lead a walk on the center’s grounds, during which participants will be able to gather fragments of the natural world and create their own mementoes.

In addition to her artistic practice, Ms. Momm is a curator who specializes in presenting art in health care centers. The fee for the talk-workshop is $30, $20 for members.