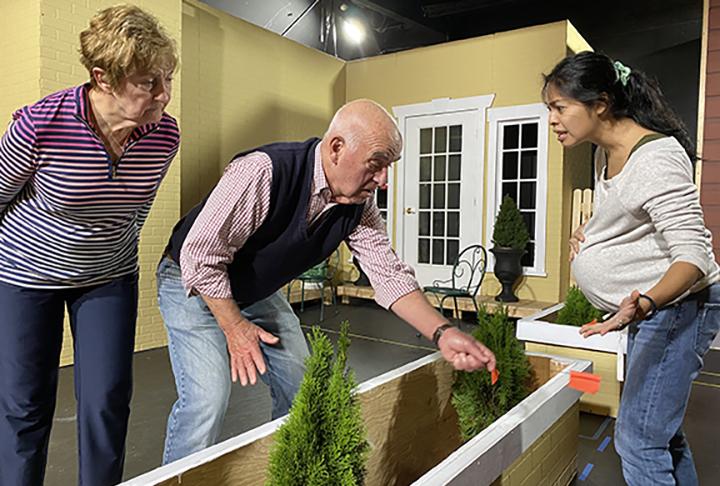 Next week's opening of the 2021-2022 season at the Hampton Theatre Company in Quogue will mark the first time the theater will be at full capacity in more than 18 months. Thinking back to March 2020, Andrew Botsford, the company’s president as well as a frequent actor and director, said, “Nobody knew anything.”

By that, he meant that when they had to shut down a week before the opening of A.R. Gurney’s play “Sylvia,” they thought, “Okay, this is a little bump,” and it was penciled in for May. When that didn’t pan out, they thought the summer would bring warm weather and a lull in the pandemic, allowing for a September opening.

And so it went until this past May, when they were finally able to open “Sylvia” -- at 30 percent capacity. Fortunately, the set had remained in place for 15 months.

As with theaters and cultural organizations everywhere, there was concern about the theater’s future, especially as the company's general manager, some bookkeeping staff, and others were on salary, with no other source of income.

Mr. Botsford emphasized, however, that H.T.C. was very fortunate, especially considering the toll the pandemic took on so many. “People were wonderful, they stepped up and continued to donate money, and that kept us going so we could move forward.”

The company is indeed going forward with “Native Gardens,” a play by Karen Zacarias that will open a three-week run at 7 p.m. next Thursday. The play was praised by The Minneapolis Star Tribune during its 2017 run there as a “brilliant new comedy [in which] cultures and gardens clash.”

“Native Gardens” follows two couples who live next door to each other in an historic Washington, D.C., neighborhood. Frank and Virginia are a couple of older empty-nesters, and Frank spends most of his free time perfecting his manicured garden, which he hopes will win him an award from a local horticultural society.

Tania and Pablo Del Valle are a Latinx couple in their 30s whose plans for their fixer-upper include a “native garden” consisting of indigenous plants. Problems arise when Tania and Pablo offer to replace the chain-link fence that separates the two yards, only to discover that the old fence has deprived them of two feet of their property. A battle over those two feet ensues.

The idea for the play was planted at a dinner party where a friend of Ms. Zacarias told her she was in a fight with her neighbors. “All of those fights are so primal and poetic and absurd in some ways,” the playwright told American Theatre Magazine.

“I kept thinking, it’s almost like every single battle between nations or tribes . . . it boils down to this fight about property and culture, in a sense.”

The play also gave Ms. Zacarias, who was born in Mexico, a platform for creating Latinx characters.

Mr. Botsford remarked on his own predilection for “shows that have a lot of humor in them, but have teeth.” While “Native Gardens” is light-hearted, “there’s a little bit of racism, a little bit of privilege, a little bit of age difference, generational conflict, and Anglo-Hispanic conflict.”

As for the idea of the pollinator pathway and the use of native plants, which is sweeping Long Island and much of the Northeast “to save the butterflies and the bees and the birds," it's "right in the wheelhouse of this play,” he said.

The cast includes Terrance Fiore as Frank, Martha Kelly as Virginia, Samantha Herrera as Tania, and Edwin A. Cruz as Pablo. Direction is by George Loizides, set design by Gary Hygom, lighting design by Sebastian Paczynski, sound by Seamus Naughton, and costumes by Teresa Lebrun.

Performances will take place Thursdays and Fridays at 7 p.m., Saturdays at 8, and Sundays at 2:30 p.m., with an additional matinee set for Nov. 6. A conversation with the cast will follow the Oct. 29 performance.

Tickets are $36, $31 for senior citizens, and $20 for students 25 and under. Proof of vaccination or documentation of a negative Covid-19 test within 72 hours of the day of the performance will be required, as will face covering while inside the theater