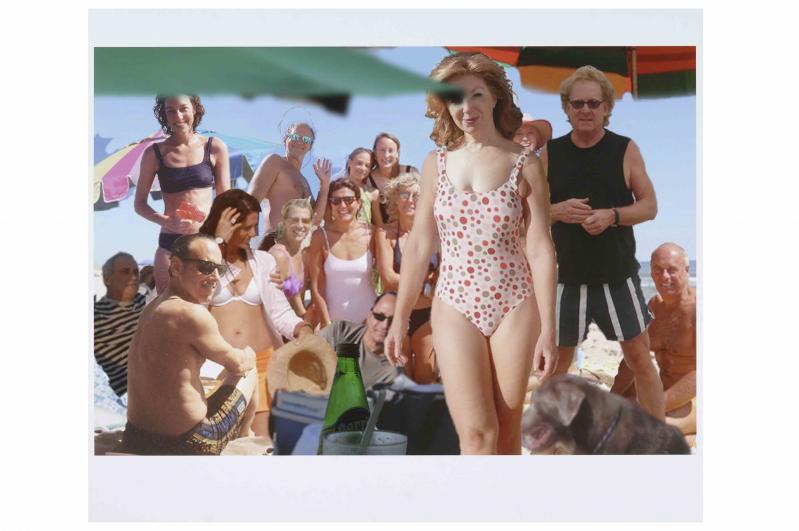 Susan Galardi chose to post Eric Fischl's "The Gang" at a time of social distancing because it showed people close together during a happier time.
By Mark Segal

The Parrish Art Museum's March 16 Instagram post announced the closure of the museum in Water Mill and invited the community to engage with its virtual content. Susan Galardi, the museum's communications director, recalled that day during a recent conversation.

"When the museum temporarily closed the building, we realized, like everyone else, that the digital platform was our smoke signal, our flare, our communication. We started to look at our Instagram and we wondered how can we make it a little meatier."

In the three and a half months since, the site has developed content aligned with several distinct themes. A recurring series, "Our Artists, Our Neighbors," was conceived in March and has been written by Ms. Galardi. "In every post I talk to an artist about one work from our collection. It's nice because people can hear the artist's own voice. And it's a luxury for me to be able to talk to a different artist each week about a single work and what was their thought process at the time."

In addition to being focused on a specific work and moment in time, the posts often make connections among East End artists and links to the cataclysmic events of the present. Before interviewing Audrey Flack, Ms. Galardi looked at the artist's works in the museum's collection. She chose Ms. Flack's "Lady Madonna," a 1972 lithograph inspired by a Baroque sculpture of a weeping Virgin Mary.

"That was about a week after the murder of George Floyd. I felt a lot looking at that work, and I felt at that moment it would really resonate with a lot of people." Ms. Flack had her own thoughts about the piece.

"For me, Mary goes far beyond religion," Ms. Flack said. "She is a universal symbol. She's the great mother, Gaia. . . . Children in distress call for the mother. George Floyd, a great big man, called out 'Mama' as he was dying."

Eric Fischl's "The Gang" is a 2006 chromogenic color print that features a group of the artist's friends at the beach, among them Bryan Hunt, David Salle, and April Gornik, his wife. The figures were actually photographed separately and combined digitally so that they seem to inhabit an impossibly tight space.

"It was perfect, because when I posted it, everybody was really into the whole social distancing thing," Ms. Galardi said. "There was something wonderful about that work in that it showed all these people together."

For her post on the photographer Ralph Gibson, she chose "Keyhole," from his 2009 "American Gothic" series. "Every picture I take has a context -- a spoon, chipped enamel," Mr. Gibson said. "If it suggests Americana or is in the American grain, it's in the context of American Gothic."

He added that the image introduces the element of scale. "A keyhole isn't that large. When the proportion of something shifts, so does the meaning." Living in Sag Harbor during Covid-19 reignited Mr. Gibson's passion for the series. "In two months, I've created a 72-page book. I never produce at that rate."

One reason Ms. Galardi wanted to do "Our Artists, Our Neighbors" was that when people think about the artists of the Hamptons, they inevitably think about historical figures such as Jackson Pollock. "The artists in this series are of great renown, but they are people you can bump into at the I.G.A. They're here, and they're still working here. And they're in the collection."

During March, Women's History Month, one day each week featured a post dedicated to work by women artists in the collection, among them Betty Parsons, Helen Frankenthaler, and Carolee Schneemann. A photograph from the collection by Fred McDarragh documents Schneemann's famous performance in 1975 at Ashawagh Hall in Springs.

April, National Poetry Month, introduced "Painters and Poets," a series whose focus included collaborations between the poet James Schuyler and the painters Robert Dash and Darragh Park. That series was inspired by a museum exhibition organized in 2016 by Alicia Longwell, the Parrish's chief curator. Savannah Petrick, the museum's curatorial assistant, wrote both the March and April series.

In addition to the themed series, the Instagram site has posts about the museum's programs, including its Fridays Nights Live series, and entries about such 20th-century figures as Norman Bluhm, Mike Goldberg, and Roy Lichtenstein. But its most up-to-the-moment feature is "Artist Stories From the Pandemic," a series of two-minute videos about living and working in quarantine.

The museum invited more than 100 artists to submit videos. "We format them and they get released a few at a time. It's very different from how we have used Instagram in the past." Among the artists whose videos have been posted are Lillian Ball, Ilya and Emilia Kabakov, Melinda Hackett, Hope Sandrow, Judith Hudson, John Torreano, and peter campus.

Speaking of the Instagram site, Ms. Galardi said, "It's just about going a little deeper, giving a little more anecdotal information. The posts are a little longer than typical Instagram posts." Taken together, the posts are a rich source of information and a many-layered portrait of the East End's artistic community.

She was also struck by the connectedness of that community. After she interviewed Billy Sullivan about his portrait of the poet Max Blagg, Mr. Blagg got in touch with her and they began a dialogue. When she had difficulty reaching Nan Goldin about her photograph of David Wojnarowicz, Mr. Blagg put them in touch with each other.

Dan Rizzie, whose painting "Poppy (Number One)" was posted in early April, is a North Haven neighbor of Ms. Galardi's. "I always wondered about that giant ball hanging from a tree in his front yard," she said. She learned not only that the metal ball-shaped anchor was part of the inspiration for the painting, but also that the late artist Alan Shields gave it to Mr. Rizzie. "It's all about the connection of the artists to each other and to the museum. And through Instagram we're trying to connect the greater community to that."