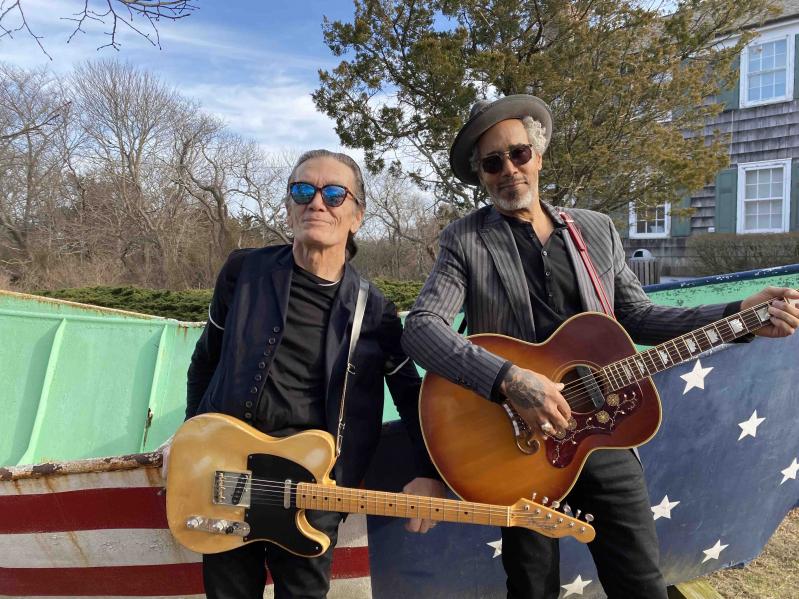 It was inevitable that the blues would meet country and give birth to something new. Less probable, perhaps, is a recent pairing under the sprawling, glorious umbrella of rock 'n' roll that, in the dystopia of America circa 2020, has produced an outstanding collection of songs that may prove a definitive reflection of the era.

"Stony Hill," to be released via the BMG music company on Aug. 28, pairs the guitarist G.E. Smith, who lives in Amagansett, with LeRoy Bell, a singer-songwriter and musician whose works have been recorded by artists including Elton John, the Spinners, the O'Jays, the Temptations, and Gladys Knight and the Pips. Videos accompanying the first two songs to be issued, the politically charged "America" and the traditional "Black Is the Color," were released on Friday.

"In the blink of an eye and a mountain of lies / We were sold down the river, your land and mine / Disillusion, mass confusion, our Constitution -- they're tryna burn it down," is Mr. Bell's observation, delivered in a powerful, soulful vocal performance. "As a writer, you tend to write about what's going on in your life," he said last week.

He is a nephew of Thom Bell, a partner of the Philadelphia-soul songwriting and production duo of Kenny Gamble and Leon Huff. "I learned under his tutelage," Mr. Bell said of his uncle, recalling the indispensable emphasis on the song in its pure form. "If you don't have the song," he said, "if you can't play it on guitar or piano and it makes sense, you don't have it. That always stuck with me. I try to keep that in mind as I write."

Mr. Bell had recently written "America" when he was contacted by Taylor Barton, a recording artist who is Mr. Smith's wife. "I've been looking for a singer for 30 years," Mr. Smith said last week. "I never could quite find the right guy. Taylor is always listening to stuff. She started listening to LeRoy and said, 'Listen to this guy's voice, this is the voice you're looking for.' She contacted LeRoy in Seattle, and invited him to come here."

The musicians were fast friends. "We hit it off really well," Mr. Smith said. "We're very close in age, we grew up listening to the same records. As soon as he started playing 'America,' I said, 'Yeah, I'm
in.' "

"I played him 'America,' " Mr. Bell said, "and we went and recorded it right then, that and 'Black Is the Color' and a few others. Right away we had three or four songs. We knew we had something, we just hoped everybody else would agree."

As "America" explodes from loudspeakers this summer, America -- the country -- is once again confronting its vast inequities based on race and class, a spate of white-on-black murders and police brutality launching nationwide protests. Along with "America," "Stony Hill" is peppered with topical observations. "You might think you're suited to seek a higher post / You might think you been anointed to preach the holy ghost," Mr. Bell sings on "Let the Sunshine In." "What I don't understand is, if you're as righteous as you claim / How do you find so much pleasure in inflicting so much pain?"

"Change Is Coming Now" takes aim at ills including poverty, environmental destruction, the widening gap between rich and poor, and the plight of animals. And "Take Cover" has as its curious coda the lines "Do you spy for the red? Or rise up with blue instead?"

But "Stony Hill" is a rock 'n' roll record-- with a healthy dollop of soul -- and to this listener would feel incomplete without the insistent, exuberant "How Does It Feel." A Memphis or Muscle Shoals-style raveup that recalls the best of Wilson Pickett and Booker T. and the MGs, the song is a standout, highlighting the musical alchemy that results from Mr. Smith and Mr. Bell's collaboration. Mr. Bell "grew up listening to not just black music, but Rush, too," said Mr. Smith. "And I was listening to Motown, but also the Yardbirds."

"LeRoy had the original idea for that groove," he added, "and he was, like, slapping his guitar, saying, 'Let's do something.' I started playing that lick at the front, he started writing lyrics, and it came together. That's how we work together: He gets ideas, and I know how to flesh them out." "How Does It Feel" also features the drummer Simon Kirke, of Free and Bad Company fame. Mr. Kirke owns a house in Montauk.

"Stony Hill" was primarily recorded at Applewild Farm in Bridgehampton. "I was so happy I only had to go to Bridgehampton!" said Mr. Smith, who is the album's producer. Ms. Barton is its executive producer, and she directed the striking video for "America," in which South Fork residents and visitors will find familiar scenes.

"Taylor put that together, the idea, the look of it," Mr. Smith said. "She worked really hard on that. This project wouldn't exist except for her. She made this project happen."

Mr. Bell and Mr. Smith had touring plans including a set at the South by Southwest conference and music festival, which was to happen in Austin, Tex., in March, and which was canceled early in the pandemic. A live performance on the South Fork this summer is a possibility, however. "Like everybody else," Mr. Smith said, "we're just waiting. We'll see what happens."

"We'll make it go again," Mr. Bell added, "but who knows what that's going to be like?"

In the meantime, the videos for "America" and the duo's uptempo take on "Black Is the Color," the latter an animated feature directed by Gary Smith, can be seen on YouTube.