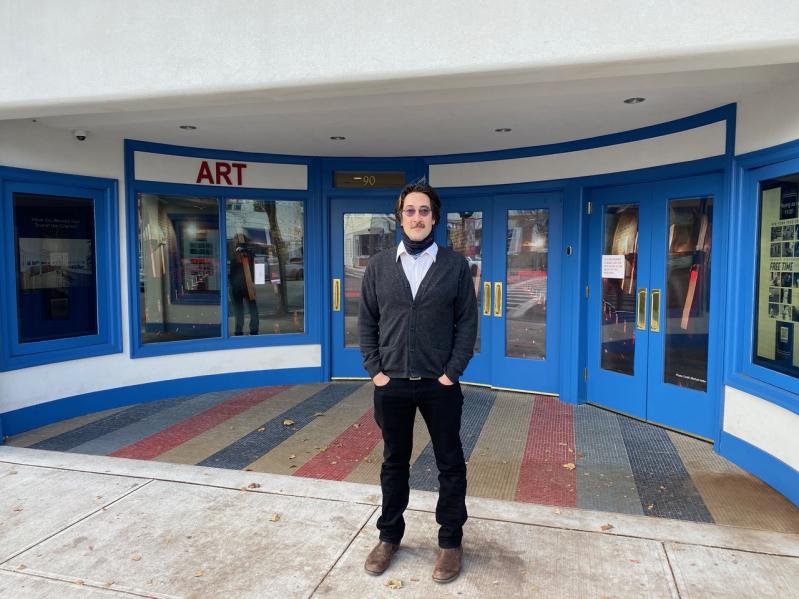 Jamie Hook, the executive director of the Sag Harbor Cinema, stood outside the cinema and its new ground-floor cafe, which opened last weekend as its screens remained dark.
Jamie Bufalino
By Jamie Bufalino

With the opening of the Sag Harbor Cinema Center delayed because of the pandemic, Jamie Hook, the executive director, is using the time to brainstorm ways to usher the theater from its art house past to a blockbuster future.

"I think if you're being conservative, which behooves a new cinema, we're going to be lucky if we open in March or more likely April, much more likely May, and quite possibly June," said Mr. Hook. "There's good things that come with that. It gives us a lot more time to get our machine humming and perfectly tuned. You know, it's a brand-new building, and we still don't know where all the circuit breakers are."

Even as its big screens remain dark, the center opened its ground-floor cafe last weekend, and plans to engage with the community via its website, social media, a newsletter, and digital screens on the building's facade. "Somehow over the next four or five months, those tools will have to express the voice of this whole organization. That's an interesting challenge," Mr. Hook said.

When the theater finally does reopen, the main obstacle will be "to break people's perception of this as an art house cinema," he said. The center has three screening rooms, including a 231-seat auditorium with a cutting-edge Dolby Atmos sound system and 53 speakers. "One of the foremost filmmakers alive in America today went in there and he came out with his mind blown," said Mr. Hook, who noted that the only other theater in New York with such a system is at Lincoln Center.

Given the theater's capabilities, it wouldn't make sense to show only films from the distant past while ignoring today's technologically advanced action movies. "We have to show 'No Time to Die,'" he said, referring to the James Bond sequel scheduled for release in April. "If we can open and show that in Dolby Atmos, that would be our best foot forward."

He also envisions having showings of curated collections of found films, including home movies, and using the theater as a venue for playing video games. "I think that's a legitimate use of the space," he said, citing the artistry of the "Assassin's Creed" game. "Haskell Wexler would have been proud to have filmed anything as good as 'Assassin's Creed,' " he said. "If that's what it takes to get younger people to come out and understand the role of cinema in a community, then that's what it takes."

Mr. Hook has previously worked as a filmmaker, a producer, the founding director of the Northwest Film Forum in Seattle, and the head of a film festival in Minnesota and of an arts center in Denmark, Me. The latter job, he said, was particularly analogous to his current one. "Denmark is a small town in which the summer population grew the town by a factor of four or five, there was a lot of incipient tension between the locals and the 'from-aways' as they call them in Maine, and a legitimate but troublesome perception that the people who are from away have no business doing the things that locals do and vice versa," he said. "Trying to find ways to play to both sides was really interesting."

The cinema should cater to a diverse array of East End residents, he said, because a multitude of people donated funds to help the theater rebuild after the 2016 fire. "Some gave $20, some gave $1 million, but every penny that was given is as important as every other penny," he said. "The nice thing about the board of directors is that they genuinely understand that."

"A cinema for me is a room in which people can have a collective experience and a common point of reference," Mr. Hook said. "The more our lives overlap with each other, the tighter the breadth of society becomes, and in my borderline-hippy mentality, that builds a better society."

Although he has a broad vision for the center, he's also determined to remain open to changing course. "We need to use this space to discover what it's going to be in the future," he said. "If we go into this thinking we already know what it is, then we've already failed our mission. We're going to throw things against the wall and see what sticks."