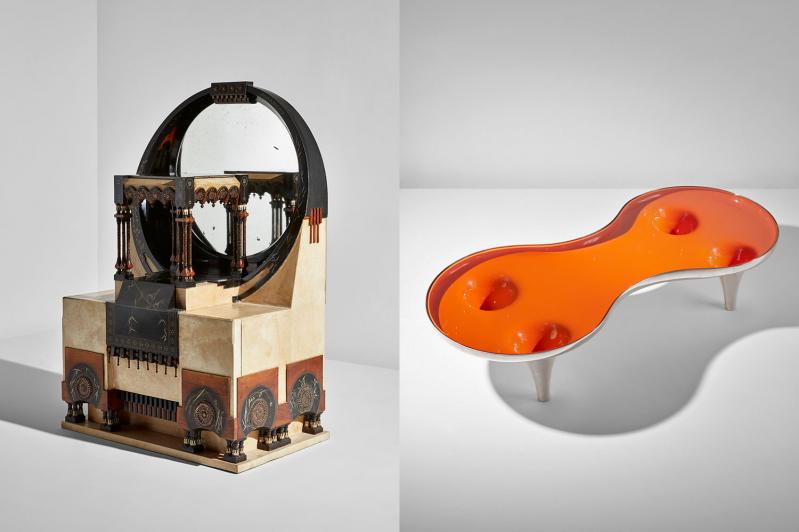 Carlo Bugatti's Vanity and Marc Newson's Orgone Chop Top coffee table will be on view at the Phillips auction house showroom in Southampton before their auction on Wednesday.
Phillips
By Mark Segal

Duck Creek Alumni Show
The Arts Center at Duck Creek will hold its first alumni benefit exhibition from 10 a.m. to 5 p.m. tomorrow through Sunday at the Fireplace Project, 851 Springs-Fireplace Road in Springs.

Five at Halsey McKay
In conjunction with NADA Miami, the annual art fair of the New Art Dealers Alliance that will take place online and in multiple locations this year, Halsey McKay Gallery will present a group exhibition at its East Hampton location through Dec. 31.

The show will include sculptures of glass and light by Elias Hansen, paintings from Denise Kupferschmidt’s “Day Night Repeat” series  depicting the sun’s cycle, and paintings by Maysha Mohamedi, whose colors are inspired by an illustrated Family Circle cookbook from 1972. Paintings by Hilary Pecis that transform photographs from her daily life, and framed works made from yarn and thread by Miranda Fengyuan Zhang are also on view.

Design at Phillips
Phillips auction house in Southampton will display highlights from its upcoming design sale beginning tomorrow and running through Wednesday. The sale will feature a monumental ceramic sculpture by Peter Voulkos, art nouveau ceramics from the collection of Jason Jacques, and a selection of Vladimir Kagan pieces from the designer's estate, according to a release. Other lots on view will be rare works by Alberto Giacometti, designs by Ingrid Donat, and work by Marc Newson and Gio Ponti.

Cordelia Lembo, Phillips's head of design in New York, singled out other examples by Lucie Rie, Hans Coper, George Ohr, and Pierre-Adrien Dalpayrat. Good design has become even more prized this year as houses continue to absorb multiple functions over the course of the day, from office to school, gym, dining room, relaxation zone, and overall haven.

The sale will take place in the auction rooms in Manhattan with phone banks there and in London with further details and a digital catalog available on the auction house's website.

A common thread linking the works can be found in the artists' instinctive reactions to "the uncertainty of contemporary life," according to a release.

Ryan Wallace in Chelsea
“The Unanimous Hour,” a solo exhibition of mixed-media paintings by Ryan Wallace, is on view at Susan Inglett Gallery in Chelsea through Jan. 16. Mr. Wallace, who lives in Brooklyn and East Hampton, repurposes fragments from earlier and developing works, layering those materials, which include oil, enamel, acrylic, Mylar, aluminum, copper, and fiberglass, into and on top of each other, to form hard-edged overlapping planes.

Of the importance of materiality to his practice, Mr. Wallace, who is also the director of the Halsey McKay Gallery in East Hampton, has said, “An image of my work does not look anything like what it actually is, and my materials help that physical interaction with the work, which I think is interesting.”

Eighty-Eight Plates
“Fragile Magic,” a show of 88 plates by Ruan Hoffman, an artist based in Amsterdam, is now on view at Jeff Lincoln Art + Design in Southampton through January. Known internationally for his irreverent ceramic works, Mr. Hoffman has chosen the plate as his favored medium.

Created in earthenware, his plates take on expressive, irregular shapes that reflect the hand and technique of the artist. Their surfaces are often adorned with text or imagery that “is frequently frank, rude, improper, or politically confrontational,” according to Alexandra Dodd in Ceramic Review.

Group Show at White Room
“B-CAWZ,” a group exhibition, will be on view at the White Room Gallery in Bridgehampton from tomorrow through Jan. 3, with a reception set for Saturday from 3 to 5 p.m. The show includes work by Seek One, whose art combines photography and graffiti; Elle, who draws from pop culture and high fashion; Jenna Krypell, a sculptor and painter, and three muralists: Stickymonger, Eduardo Kobra, and Tony (Rubin) Sjoman.

The gallery has also announced an initiative to benefit employees of the Stephen Talkhouse in Amagansett, by selling work by artists drawn to music-related themes and imagery. More information about “Rock 'n' Roll Never Dies” is available on the gallery’s website.

The Outdoor Agenda 09.17.21
A Surf Meetup for Youth
I-Tri Ride and Wine Is Saturday
END_OF_DOCUMENT_TOKEN_TO_BE_REPLACED