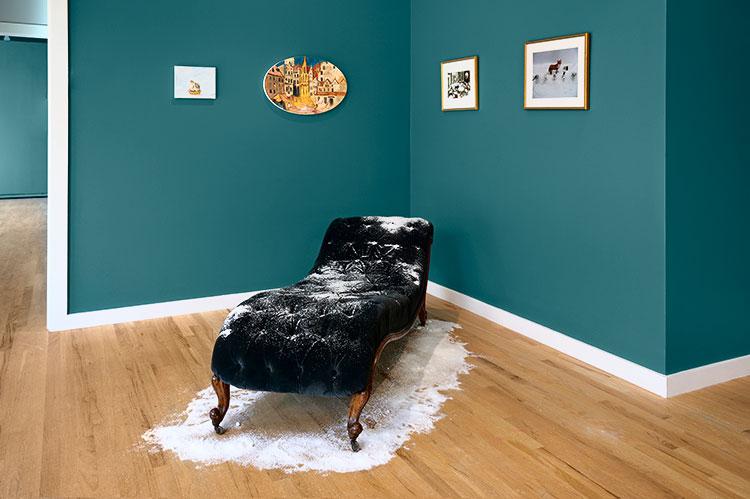 Karen Kilimnik has taken over both rooms of the South Etna gallery for an exhibition and installation with a seasonal theme.
Courtesy of the Artist, 303 Gallery, New York, and South Etna Montauk
By Jennifer Landes

A mock Tudor building that evokes visions of plastic candy canes, pneumatic Santas, artificial pre-lit trees, and cotton batting snow is the quintessential setting for Karen Kilimnik's "Christmas Service for the Forest Pets," on view at the South Etna gallery in Montauk.

It's fitting that the gallery has given over its two rooms to the artist, whose work is best experienced in aggregate. Ms. Kilimnik, whose early work was grouped under the aegis of scatter art in the 1980s and 1990s, seems best where her works are placed together as part of a thematic experience. They build on themselves in a way that makes each part more meaningful and act as a mini survey as well.

The installation was conceived by the artist along with Alison M. Gingeras, the gallery's curator. The exhibition was organized in collaboration with 303 Gallery in Chelsea, whose director, Lisa Spellman, has been a Montauk resident and representative of the artist for many years.

Ms. Kilimnik has created a familiar yet idiosyncratic winter wonderland. There are the typical signs of the season: the Christmas tree with a white skirt suggesting snow, a mantel festooned with cheap red fluffy stockings, and multicolored holiday lights lining the windows.

But there are unique ways she has created atmosphere and synergies with her wall pieces. A "Swarovski Crystal Chandelier," familiar from previous installations, is titled and included in the checklist to underline the appropriation. It acts as a beacon into the room from the outside, a Star of Bethlehem for the show. Such a star can also be seen in the tondo painting "Christmas Service for the Forest Pets," for which the show is named. It hangs in the window facing the street.

The round canvas contains a solemn gathering of bunnies, deer, birds, and other forest creatures around an evergreen, magically denuded of the snow that encases the others nearby in the forest. The taller rabbit holds a cross. It's silly and touching in a way that evokes a grandmother giving you a special mug for Christmas morning, with a not-so-subtle reminder to "put the Christ back in Christmas."

In the window next to it is a 20-inch-high model of Paris's Louvre art museum, which Ms. Kilimnik has embellished with Swarovski crystals. If the other window evokes a hokey religious take on the holiday, the "Louvre," with its magical fairy dusting of crystals, is rooted in the more commercial side, a retail window display. Like her "fairy Eiffel Tower" and "fairy ship" inside, also festooned with crystals and gems, these small appropriated sculptures can operate as stand-ins for toys and other more ostentatious presents.

Another distinctive choice was to sprinkle a tufted navy velvet Victorian chaise with powder so that it looks like newly fallen snow. The piece is not titled, nor is it on the checklist. Yet it is inextricable from the works around it. Could the "snow" have blown in from a nearby door? Not likely. Instead, it appears to be a real-life emanation from some of the artist's two-dimensional works where unusual items or beings are found nestled in the snow, like a hotel breakfast in the Himalayas, a cat in a favorite basket in the midst of a blizzard, the Pink Panther in Gstaad. One other way to see the piece is as an implied hilly landscape seen at night, the way she has used green carpeting in past installations to indicate land.

The gallery's windows help frame the tableaux from the outside, offering showcase moments and views into the space from the courtyard. It imparts a jewel box character to the setting and a further layer of artifice and distancing.

The narrative in the snowy scenes builds on the first wall of the main room. On the next wall, a portrait of Rudolf Nureyev from 1999 joins a crayon-and-pastel-on-paper drawing of "Victoria After Winterhalter," the earliest piece in the show, from 1989. On either side of the Christmas tree are paintings with a suitable amount of red. One is a rococo confection of a powdered-wigged portrait pendant called "The 1700s -- Dinner Soiree." The other, "the bird catchers," from this year, is an assemblage of collaged reproductions of drawings of classical-style architecture decorated with the suggestion of bluebirds gathering in their midst.

The rear room displays more paintings of building exteriors and interiors, some additional animals, and two paintings of less fortunate children as imagined in other eras. The paintings, "the Ragamuffin of Kiddington hall" and "the poor little beggars," remind us that this year's economic consequences have been as perilous as the health risks.

While the whole and its parts are crackling with dry irony and wit, they can still be soothing in their banality and self-consciously amateurish Romantic and rococo prettiness. Viewers should forgive themselves if they are tempted to give themselves over to this simpler experience. It's been a tough year. These tropes, presented with what the curator terms "heightened theatrical narrative fantasies," have roots in deep nostalgia and a search for lost time. It's a context we can allow in this oh-so-untypical year.

The exhibition remains on view through Jan. 10.