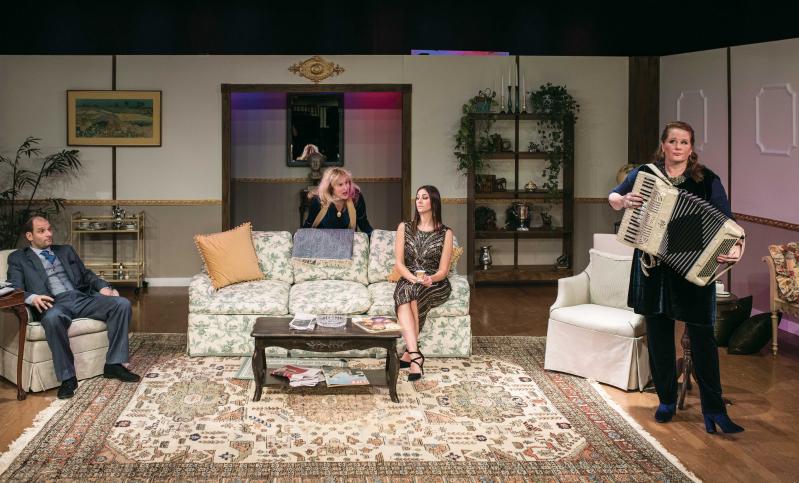 Edward Albee won a Pulitzer for “A Delicate Balance,” which premiered on Broadway in 1966. He also took home a Tony for it that year, along with multiple nominations and, later, several awards for a 1996 revival. Yet the play has neither the savage extravagance of “Who’s Afraid of Virginia Woolf?” nor the psychodramatic ingenuity of “Three Tall Women.” Does it represent the author at his best? Perhaps it did in 1966, but this two-hour-long, talky parlor puzzler doesn’t hold up particularly well today.

The production onstage at the Southampton Cultural Center, part of its Center Stage series, and which runs through Jan. 26, is a commendable one. This is a deliberately cryptic tale of love, sorrow, regret, friendship, and betrayal, offered up in weirdly coded language of baroque formality and boozy sarcasm, and delivered by characters who teeter between extremes of sanity and madness, mostly tipping in the wrong direction.

Talk about a delicate balance. It’s not easy, and Saturday’s performance wobbled at times but also held steady during other moments.

Directed by Joan Lyons, the theatrical director of Center Stage, the Southampton revival stars Bonnie Grice as Agnes, the family’s matronly core; John Leonard plays Tobias, her passive though genial husband; Kristin Whiting, who delivered the sole standout performance here, is Agnes’s perpetually drunk and truth-spilling sister, Claire; a woefully miscast Tamara Salkin occupies the difficult and shrill role of Julia, the couple’s 36-year-old infantile daughter who returns home after the collapse of her fourth marriage; Scott Wilson and JoAnna Mincarelli are Harry and Edna, Agnes and Tobias’s best friends and fellow country-clubbers, who absurdly show up at the family’s house and want to move in after some unnamed terror spooked them out of their own home.

The setting for “A Delicate Balance” is the living room of a sumptuously well-appointed suburban home, and this production’s set design, which is also credited to Ms. Lyons, perfectly depicts the type of living room one would expect of well-heeled denizens of suburbia who have buried their domestic demons under luxury trappings. But the most crucial feature of the set is undoubtedly the well-stocked drinks cabinet, out of which the domestic rancor is fueled from morn till night.

As in Albee’s thrilling marital slugfest, “Virginia Woolf,” there’s a dead child lurking. Agnes and Tobias have never recovered from the loss of their young son, and all the drama during this epic weekend serves to highlight their buried anguish and subsequent emotional vacuum. And so “A Delicate Balance” plays out as part drawing room (dark) comedy and part existential drama. Then it takes on a bit of Pinteresque menace when hysterics and threats of violence and, naturally, cocktails happen before breakfast.

I would wager a guess that Albee had intended this to be an ensemble effort, not one with one actor stealing the show. But one does in Southampton: Ms. Whiting. She plays the heavy-drinking Claire, a woman determined to drown her own demons. True, her character has all the best Albee putdowns and lacerating lines, but Ms. Whiting adds a welcome air of spontaneity to the role, making Claire seem less fossilized than the others and slightly more contemporary.

It’s interesting that Agnes’s character here is played without the iciness that Glenn Close brought to the role on Broadway in 2015. Or an earlier revival I saw in London, in which a remarkable Penelope Wilton played the family matriarch as a model of decorum, a cold and authoritative figure who drew the audience into the icy wasteland of her human heart. By contrast, Ms. Grice’s Agnes is a more sweetly, quietly suffering woman, which feels like a missed opportunity for something more indelicate.

While much of the play seems impossibly unrealistic and stuck in a time warp, there’s an element that still rings true today: how we confront the sort of panic that we all experience at sudden dark moments of our lives, the kind of fear — sometimes personal, sometimes otherworldly — that tests friendships and threatens the fragile comfort of our lives.

When Albee wrote the play in the mid-1960s, critics thought the terror of which the actors spoke could have been about the atom bomb. Later, it could have come to represent AIDS. Today, it might be any number of things — right-wing politics, terrorism, or even Facebook. What a genius Albee was to be able to detonate these fears through theatrical expression.

In her director’s notes, Ms. Lyons asks the audience not to be like the family onstage, buried under their fears and denials, but instead to “keep looking for the good.”

All right then, let’s end with this: “A Delicate Balance” is a challenging play, not really one for amateurs or dabblers. But this group of hard-working actors is still coalescing and clearly has the collective talent to pull it off. Undoubtedly this is a production that will deepen over time.

Performances are Thursdays through Saturdays at 7 p.m. and Sundays through Jan. 26 at 2 p.m. Tickets are $25, $15 for students under 21. Brunch-theater and dinner-theater packages are also available. More information and tickets can be found at scc-arts.org.