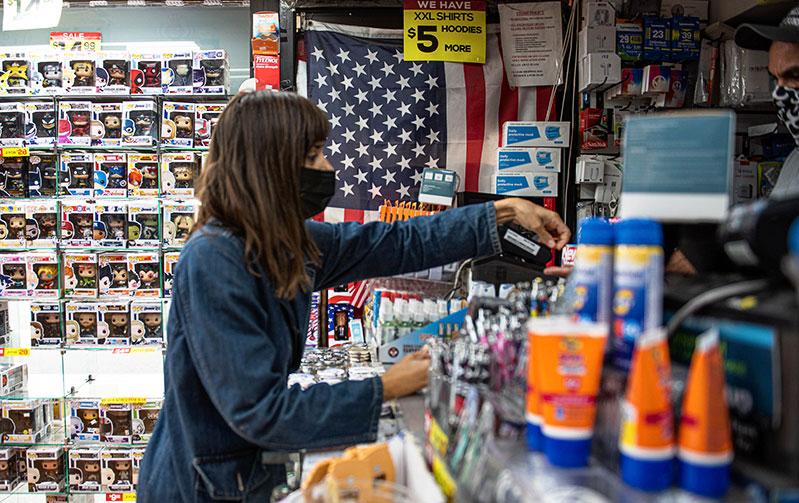 One of the highlights of this year's delayed but robust art season has been Jill Magid's exhibition "Homage CMYK (2019)" at Dia Bridgehampton.

The installation, comprising 11 four-channel screen prints on linen, is a meditation on authorship, legal limitations and their interference with the creative urge, and the power of the individual to circumvent or override those limits. It is of a piece with a career spent addressing such themes.

At the same time, Ms. Magid, an Amagansett resident, has been busy with another work more specific to this year.

"Tender" is a public art project that was launched with Creative Time in New York City in September. In it, Ms. Magid circulated 120,000 United States pennies through the city's bodegas, a nod to the $1,200 stimulus checks sent to individuals by the government earlier this year. Along the sides of the pennies, the words "The Body Was Already So Fragile" were engraved in all caps in a new font designed for government use last year.

Ms. Magid discussed both projects on with curators at Dia and Creative Time on Oct. 28.

"Homage CMYK (2019)" involves unlicensed Josef Albers screen prints at Luis Barragán's house in Mexico City. Reproductions of the work of the Mexican architect are tightly controlled by the management of his estate. Not one to be deterred, Ms. Magid found a way to examine the architect's legacy through an appropriation of images associated with him that were not subject to its controls.

Once she realized there was a loophole, she began using photographs from publications that had printed works by Barragán, such as his house, Casa Barragán, or other subjects associated with him. When there was a photograph she was not allowed to take herself, she would photograph the image from a book or frame that photo and hang it, with the rest of the book left outside the frame. The strategy called "attention to this impossibility of circulation unless there was this previously published instance of it," she said.

As she was working on that series, she began thinking about the "beautiful irony" of the Albers prints in the background of two rooms in the house. "While the corporation that owned the rights to Barragán's work wouldn't allow reproductions of his work, Barragán himself had no problem with copies." With oddly sized Picassos and Modiglianis in the mix, Albers was far from the only artist whose work appeared in the house as copies. She saw them as a foil to the restrictive rules. "Because the Albers were forgeries or fakes, they kind of fell out of any system of control."

As she began scanning photographs of the living room where one of the copies hangs, she said the questions that occurred to her became really interesting, even overlapping with the themes in "Tender" in ways that might not be immediately obvious.

"The image of Lincoln on the penny," for example, "is one of the most appropriated images ever, at least according to the U.S. Mint," Ms. Magid said.

"Tender" also has a set of complicated, interwoven meanings and themes. The pennies she chose as subject are ubiquitous and mark time, branded as they are with the year 2020. Like the Albers prints, they are able to move freely because in a way no one owns them, she said. "Pennies are promiscuous national monuments or public artworks. That's what they're supposed to be. Their uniqueness disappears."

The 120,000 pennies she disseminated have a copper surface that is antimicrobial, the properties of which have been a central obsession of the Covid-19 pandemic. The phrase "the body was already so fragile" came from Mohamed El-Erian, quoted in a New Yorker piece on the economy post-Coronavirus. Yet the metaphor works back on itself and this country's democracy as well (although we did not know it until recently). Even the secure trucks that delivered the currency to the bodegas had echoes of this spring's crisis when refrigerated trucks were employed to keep up with the rising body count in the city.

As the cash works its way through the economy, it highlights the currency shortage, a result of most transactions occurring electronically to avoid contact during the pandemic. It also replicates the way the virus has jumped from state to state, region to region, coast to coast, over the past year. According to Creative Time: "In this way, Magid reimagines public art as not a static entity, but rather as a phenomenon that circulates freely among the population; each transaction builds social relations in networks of exchange and interconnectivity."

The recorded Zoom talk, which also features reflections and analysis by Dia's curator, Matilde Guidelli-Guidi, and Creative Time's curator, Justine Ludwig, should be available on the Dia website by the end of this week. Ms. Magid's exhibition at Dia Bridgehampton will be on view through June.