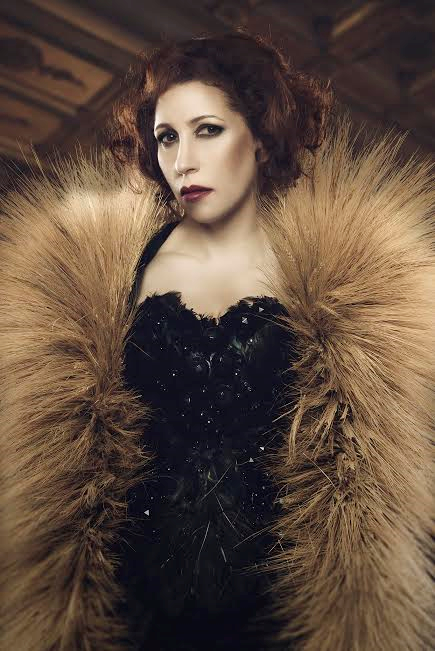 Anna Tonna as Queen Elizabeth in "Rival Queens," an original opera by Divaria Productions to be streamed by Bay Street Theater.
By Mark Segal

Biopic Opera
“Rival Queens,” an original biopic opera from Divaria Productions, will have its virtual world premiere with Bay Street Theater next Thursday at 8 p.m. The one-hour production, which tells the story of Mary Queen of Scots and Queen Elizabeth I, features music from Donizetti’s opera “Maria Stuarda” with English subtitles.

The production blends documentary film with the music of opera and draws on letters between the two women and historical research. “Rival Queens” was originally scheduled to be performed live at Bay Street, where the company has presented productions for the past six years. Tickets are $20 via the Bay Street website.

Will Pomerantz, Bay Street’s associate artistic director, will host “Writing Your Life Story,” a free online workshop for adults, next Thursday from 6 to 7:30 p.m. Students will learn how to use their creative writing skills to tell their story in their own words.

Film and TV M.F.A.
Stony Brook Manhattan will hold two virtual open houses in connection with its M.F.A. program in film and television on Nov. 16 and 17. During the first program, Alan Kingsberg, the program’s head of TV writing, will introduce the TV writing curriculum at 6:45 p.m. and interview Davita Scarlett, a producer and writer for CBS-TV, at 8.

The second open house will focus on the film program. Magdalene Brandeis, Christine Vachon, and Simone Pero will discuss the film M.F.A. at 5:20 p.m., and Ms. Vachon will talk with the director Todd Haynes at 6:30. Participation is limited; registration is by email to [email protected].

Native Traditions
The Southampton History Museum will present a virtual screening of “1,000 Years a Witness,” a new documentary by Bryan Downey of Sag Harbor, next Thursday at 11 a.m. In the film, 12 Shinnecock Nation elders, their spiritual teacher, and a child, whose combined ages add up to 1,000, discuss the struggle to keep the younger generation of Native Americans connected to their roots in the face of Western technology and the loss of tribal traditions.

A link to next Thursday’s screening, which will include a conversation with the director, is on the museum’s website.

Line Dancing
A weekly class in country line dancing, hosted by Natalie Boyle, will kick off, live, at the Southampton Cultural Center tomorrow evening at 7 and continue every Friday through Jan. 29. Lessons will focus on dances played by top Long Island bands and D.J.s, according to a release, and all levels will be welcomed. The cost is $100 per month.

Trees, Wreaths for Sale in Amagansett
Holiday Cheer Is Coming to Sag Harbor
Even More Thanksgiving Options From the Pike and Old Stove
END_OF_DOCUMENT_TOKEN_TO_BE_REPLACED