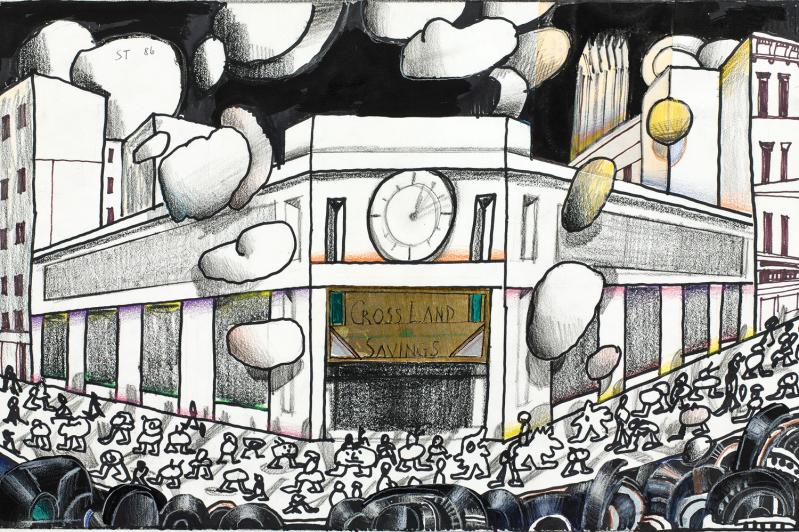 Steinberg at Pace
An exhibition of photographs and works on paper by Saul Steinberg will open at the Pace Gallery in East Hampton on Friday and remain on view through Jan. 17. The 21 works in the show depict everyday life and notable public locations, among then “Union Square” (1982), “Chicago” (1952), “Paris” (1984), and, closer to home, “Riverhead” (1985), which is represented by the Big Duck against a black sky.

Steinberg, who came to the United States from Europe in 1942 and bought a house in Amagansett in 1959, was widely known through his drawings and covers for The New Yorker. At the same time, his experiments with drawing, photography, collage, and sculpture and his repurposing of stylistic elements of Cubism, Futurism, and Surrealism testify to his authority as a modernist artist.

Friends for Real
“Jane Freilicher and Fairfield Porter: Between Friends,” the first exhibition organized jointly by The Drawing Room and the Eric Brown Art Group, is on view through Dec. 13 in the ground floor space at 55 Main Street in East Hampton. Consisting of paintings and works on paper, the show includes iconic East End landscapes and vernacular village scenes, as well as interiors and still lifes.

Porter moved to Southampton in 1949, and Freilicher first visited the East End in the early 1950s, when she met Porter after he reviewed her first exhibition at Tibor de Nagy Gallery for ARTnews. By juxtaposing the artists’ treatment of similar subjects, “Between Friends” illuminates their fruitful exchange of ideas and sensibilities.

Hartley at Keyes
“Onward,” a show of recent paintings by Ted Hartley, will open on Friday at Keyes Art in Sag Harbor, with a reception from 4 to 8 p.m., and continue through Dec. 20. Mr. Hartley has been a Navy pilot, investment banker, writer, producer, studio head, and actor. When his wife, Dina Merrill, became ill some 10 years ago, he began organizing art classes in their home as a creative way to socialize with their friends.

After her death in 2017, he not only resumed classes but also began to paint, with a determination that led to the construction of a separate studio at his East Hampton residence. George Negroponte, an artist and curator, has cited Mr. Hartley’s “uncanny ability to make art that is drenched in living atmosphere, color, and light.”

A Virtual Alliance
The annual holiday show of the Artists Alliance of East Hampton will take place virtually this year, launching online on Saturday and continuing through Jan. 1. The exhibition, which consists of more than 100 works by East End artists, can be accessed through the group's website.

Trees, Wreaths for Sale in Amagansett
Holiday Cheer Is Coming to Sag Harbor
Even More Thanksgiving Options From the Pike and Old Stove
END_OF_DOCUMENT_TOKEN_TO_BE_REPLACED