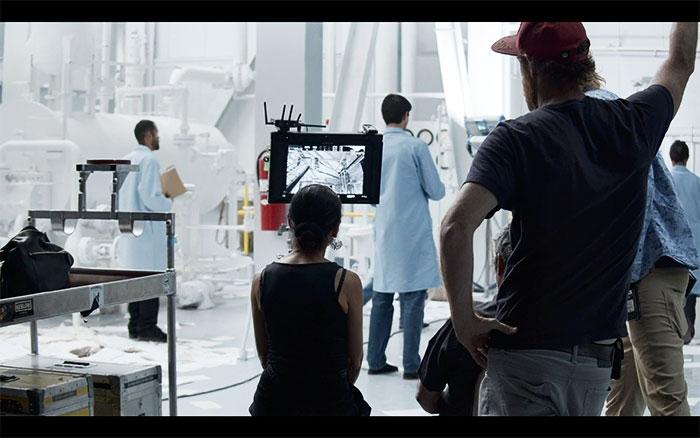 The video artist and photographer Shirin Neshat watches footage from the recording of her video "Land of Dreams" as captured by Sophie Chahinian's documentary on its making.
Sophie Chahinian
By Jennifer Landes

The fall art season has officially arrived at Guild Hall, which is presenting three topical visual arts events in the coming days. A recorded talk with Shirin Neshat about her latest video and film project will be streamed on Sunday. An installation by Rosario Varela will open tomorrow, and a virtual talk with Renee Cox and Sanford Biggers will take place on Tuesday.

A conversation about "The Making of Shirin Neshat's 'Land of Dreams' " was taped earlier this year at Guild Hall. Ms. Neshat was joined by Sophie Chahinian, both of whom were interviewed by Andrea Grover, Guild Hall's executive director. They discussed "Land of Dreams," the video Ms. Neshat made last year, and Ms. Chahinian's 25-minute documentary on the making of that video.

The artist's video and Ms. Chahinian's film were shown as part of the event, and they bookend the talk, which was initially intended for the Hamptons Institute. Because of the pandemic, this will be the only offering related to that annual series of authoritative talks addressing national and international political, cultural, economic, educational, and social issues.

Ms. Neshat's background as an American citizen who emigrated from Iran and how that has informed her art previously and in this new work are completely appropriate in this context. Noting that her work was always focused outside America, she found herself concerned with the current political climate here and decided it was time to address it.

The focus of "Land of Dreams" is Simin, a fictionalized character who goes around New Mexico photographing residents and collecting their hopes and dreams. The piece is divided into two parts, "Land of Dreams" and "The Colony."

The story mirrors Ms. Neshat's own photographic project in New Mexico, the products of which are included in the video. Those photos were also displayed in accompanying exhibitions in London earlier this year and in a retrospective at the Broad art museum in Los Angeles that opened in late 2019. The subjects captured by her camera include Latino immigrants, Native Americans, African-Americans, and Caucasians who live in one of the poorest states in the nation.

She says she has the same feeling of being left behind by her country that these subjects' faces seem to signify. "It's an extension of my experience and journey and experience in this country at large," Ms. Neshat says in the talk. Ms. Neshat's earliest work was in photography and then she drifted into film and video. The return to photography that becomes the subject of her video art integrates those forms.

It's a portrait of America as envisioned by an immigrant, yet it took a long time for her to train her lens on American subjects. "I thought of myself as an Iranian artist," she says, never assimilating completely, although she has been here since she was 17. With the rise in tensions between classes and cultures in this country, she wanted to document this way of life in case any part of it was lost. "People of Iran and Americans have a lot in common," she notes. Americans may look down on Iranian culture and "think we're oppressed, but there is similar political injustice here."

Ms. Chahinian's film follows the people behind the scenes while making the video, which involved complicated sets and exteriors, detailed and richly thought-out props, and a dedicated crew who worked to bring it all together. It was shown as part of the programs tied to the Broad exhibition. It is in color, which unlines what was going on in the real world behind the video, shot in black and white.

It differs from the films that make up The Artist Profile Project, her effort to capture artists speaking about their work and inspirations in their own words. It also shares many similarities, but in a more complicated way. Instead of relying on the just the subject's viewpoint, this film offers a more panoramic view. In lieu of an examination of a career, this is a close-up perspective of a single work.

The free hourlong event will start at 5:30 and requires registration to access the link. After the initial presentation, it will be available on Vimeo with a $5 donation.

Ms. Varela's installation "Red, Gold, and You" will be placed in Guild Hall's garden. After decking out the four trees in red paper and gold tape, the artist will put the piece in the hands of its viewers over the two-week period of its display. They will direct an art handler to move the paper and reattach it, which will gradually or radically alter the appearance of the work over time. On view through Oct. 26, it will be accompanied by a blood drive on Friday, Oct. 23. Reservations are recommended for both the exhibition and the blood drive, with a suggested donation.

"Ring the Alarm . . . A Conversation With Sanford Biggers and Renee Cox," set for Tuesday evening, is part of a series leading up to an exhibition of Black artists at Guild Hall in 2023. Ms. Cox previously spoke with the artist Derrick Adams. Mr. Biggers is primarily known for conceptual installations and his works involving and transforming antique quilts, animated by their possible role in communicating coded information along the Underground Railroad. Ms. Cox's work in photography, installations, and collage examines the perception of the Black female body, recontextualizing it throughout history.

The talk, which begins at 5 on Zoom, is free with a suggested donation and requires registration on the Guild Hall website.