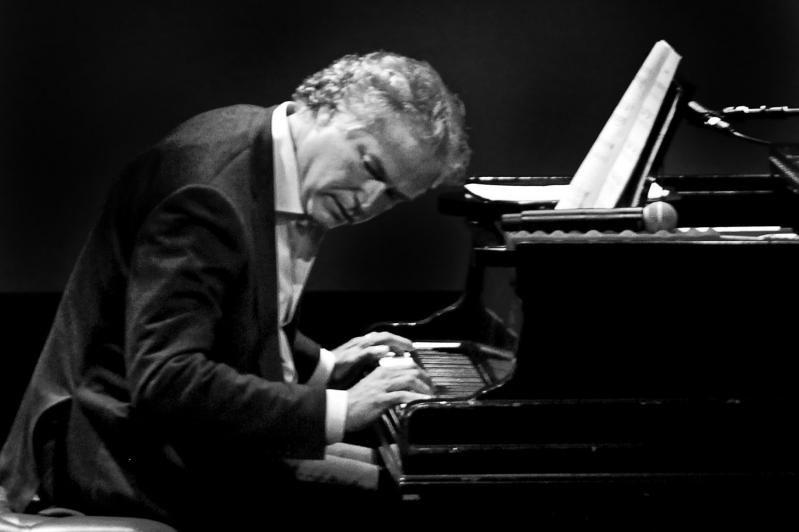 Bruce Wolosoff, a Shelter Island composer whose work fuses classical, modern, jazz, and blues into a distinctly American style, has recently written a cello concerto that has been recorded by a Grammy Award-winning artist and one of the world’s top orchestras, and the album rose to the top 10 in a leading classical music chart.

Speaking about when he was present in July 2018 for the recording made by the Royal Philharmonic Orchestra, Mr. Wolosoff said last week, “Sitting in that church in London, it was one of the great days of my life. It was a very moving experience. I realized that day that one of the things that I was put on earth to do is to write orchestral music.”

He had met Sara Sant’Ambrogio, the cellist who recorded the piece, a few years earlier. She is the founder and cellist of the Eroica Trio, and he wrote a new piece for the ensemble. Ms. Sant’Ambrogio has appeared with orchestras in Beijing, Budapest, Prague, and Osaka, in addition to performing throughout the U.S.

“We got along really well; I loved her sound and she was inspiring to write for because she plays so passionately. She can do things on the cello that a lot of other people can’t do. Particularly, her high playing is exceptional. You can write in the violin range for her, because she is just that good!”

Ms. Sant’Ambrogio soon suggested that he write a concerto for her. As a student, he had written some orchestral music, which he never really got to hear performed. Most of his work since then has been smaller-scale chamber music, stage pieces, or solo piano, so the new concerto is on a larger scale in terms of instrumentation. It is scored for “a Beethoven-size group plus some additional percussion.”

“I really like the feeling of the larger canvas,” Mr. Wolosoff said. “I was able to put more things in motion, because I wanted a certain color. Since I wanted that color, you can’t just have fluidity; it has to be doing something.” Having the broader canvas, or more colors, “implies activity of some kind, so I found myself getting more things moving as a result of the additional color.”

It is hard to answer a question about how long it took to compose the 22-minute work. “I like to write, and then put it down, and pick it back up and look at it again, and do that a few times. So, I wrote for six months, then I put it down and picked it up two more times” to tweak it.

Eventually the composer and the cellist got together, and Mr. Wolosoff played the orchestral part on the piano as Ms. Sant’Ambrogio played the cello part. “And she said, ‘How would you feel about my recording this with the Royal Philharmonic Orchestra,’ and I thought she was joking. But it turned out to be real.”

When the day finally came for the recording at the Cripplesgate Church in London, just over a year ago, there wasn’t much time to record. “It was recorded in bits, starting with the hardest parts, and then sections were played and reviewed, until the recording engineer and record producer had what they needed. And then I didn’t hear it again for a year, until I heard the recording! Interestingly enough, I have not heard the work played all the way through from beginning to end in person.”

The recording was released on Oct. 18. The concerto appears on the album “Sara Sant’Ambrogio and the Royal Philharmonic Orchestra,” conducted by Grzegorz Nowak, along with the Elgar Cello Concerto and her arrangements of Piazzolla’s “Libertango” and “Oblivion.” It can readily be found on Spotify, Apple Music, Amazon, and other sources.

If all of that weren’t enough of an honor, the album had the distinction of climbing to number 6 on the Billboard Classical Album charts for two weeks in November. “There are some big names on that list. I knew all the names on that list except my own,” Mr. Wolosoff joked. In addition, the classical music radio station WQXR has aired the concerto twice in the last month. “It was a moment of validation,” the composer said.

The recording of the concerto received a five-star review by Jerry Dubins of Fanfare magazine, which said in part, “It’s exceedingly rare to encounter a major new work by a living composer which, without widespread exposure over an extended period of time, can be declared an instant masterpiece, but in my opinion, American composer Bruce Wolosoff . . . has pulled off that coup. . . . [It is] a work that is filled with real melody, rhythmic drive, urgent drama, and sweeping orchestral vistas. In other words, Wolosoff has composed a concerto in the true Romantic tradition, and it’s of such compelling beauty that it doesn’t take more than one listening to fall in love with it.”

Mr. Wolosoff’s next project is the Manhattan premiere of his “The Astronomer’s Key,” inspired by work of the Abstract Expressionist painter Milton Resnick, on Jan. 26. Also on that program will be “The Loom,” inspired by the watercolors of Eric Fischl, which was the piece that Mr. Wolosoff composed for the Eroica Trio and the first occasion of he and Ms. Sant’Ambrogio working together.