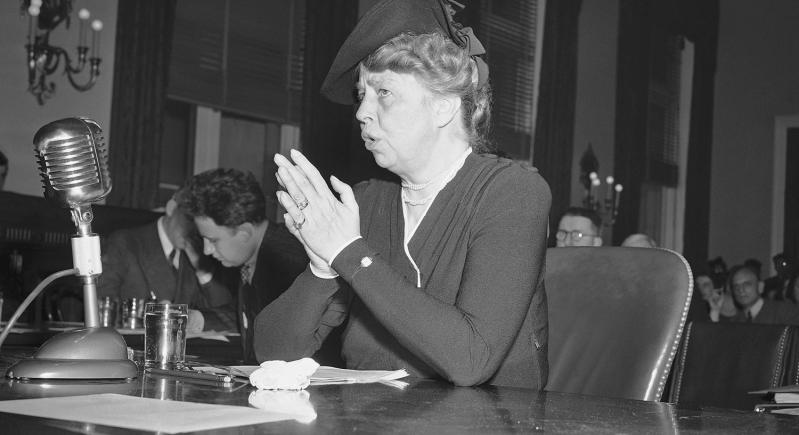 Eleanor Roosevelt, seen here testifying before Congress, is the subject of a project years in the making to bring her story to the screen and online, part of an educational effort by Frazer Dougherty and Cannon Hersey.
By Mark Segal

LTV Studios on Industrial Road in Wainscott will be the site of a free daylong celebration of Eleanor Roosevelt on Saturday with music, an invocation, and introductions to the principal participants. The event will continue with a conversation with the historian Blanche Wiesen Cook, author of a three-volume biography about Roosevelt, panel discussions, creative workshops, and more.Saturday’s festivities are the public inauguration of ELEANOR, a platform that includes a for-profit television series that has been in development for 20 years by Frazer Dougherty, the founder of LTV, and a nonprofit entity that will tell Roosevelt’s story to onsite and online audiences through education programs, live experiences, and video content.Mr. Dougherty bought the film rights to Ms. Cook’s biography 10 years ago and subsequently gave the production rights to Paradise Producers Productions, whose president is Cannon Hersey, a photographer, artist, and organizer of large-scale cultural projects in nontraditional spaces. The lives of Mr. Dougherty and Mr. Cannon, who are involved with all aspects of ELEANOR, have been intertwined for many years. Mr. Hersey’s grandfather was John Hersey, the Pulitzer Prize-winning writer perhaps best known for his books “Hiroshima” and “A Bell for Adano.” His grandmother was Frances Ann Cannon, a theatrical producer who was a trustee at Guild Hall and who, after her divorce from Mr. Hersey, married Mr. Dougherty.In addition, CrossPathCulture, Cannon Hersey’s first nonprofit, which was created in 1999 to promote global community building through the arts, was fiscally sponsored by LTV. “Frazer and my grandmother have inspired me,” said Cannon. “I’ve been doing this kind of work since I was 20 years old. Working in nonprofit and as an artist and with television, this is kind of like a homecoming for all of us.” In addition to Ms. Cook, who will speak at 10, Craig Hatkoff, a philanthropist and co-founder of the Tribeca Film Festival, and Kunal Sood, a TED Resident and founder of the X-Impact Group and Novus, will also contribute to the morning’s discussions, which will address human rights, gender equality, racial justice, L.G.B.T.Q. rights, and economic quality.After a break for lunch and optional offerings including an LTV tour, acupuncture, and yoga, creative workshops will be offered. Kathie Russo, the producer of Alec Baldwin’s podcast “Here’s the Thing” will lead a class in podcast production, and Kym Canter, founder of the sustainable fashion brand House of Fluff, will focus on zero-waste art.Other workshops will be led by Mr. Hersey (silk-screening ELEANOR T-shirts), Junchen Huang (projection), and Todd Sines (design). Dancing and dinner will follow the closing acknowledgments.Speaking of the entire ELEANOR enterprise, Mr. Hersey said, “It’s a passion project for everybody. Women have been so disrespected historically, and how do we start to mend that? At the same time, people are looking for hopeful and optimistic stories they can feel connected to, and who better than Eleanor Roosevelt to offer that? We want to create space where meaningful conversations can happen, where people see they actually have the potential to make a better community and a better nation and a better world.”He added that LTV was an ideal venue for the public launch of the project. “LTV is about how we empower communities to tell their own stories, to create opportunities for the public to find its voice.”Development of the television series has moved quickly over the past two years. Two Hollywood executives, Alex Lasky and Derek Anderson, have signed on to the project as executive producers, two complete scripts have been delivered to agents and actors, and a 26-episode, two-season plan has been formulated. “We’re dealing with some of the bigger agencies, and we’ve been negotiating with one A-list star I can’t name until we have a deal in hand,” said Mr. Hersey.Saturday’s event, which starts at 9:30 a.m., is free and open to the public. More information is available and reservations can be made at myeleanor.org.