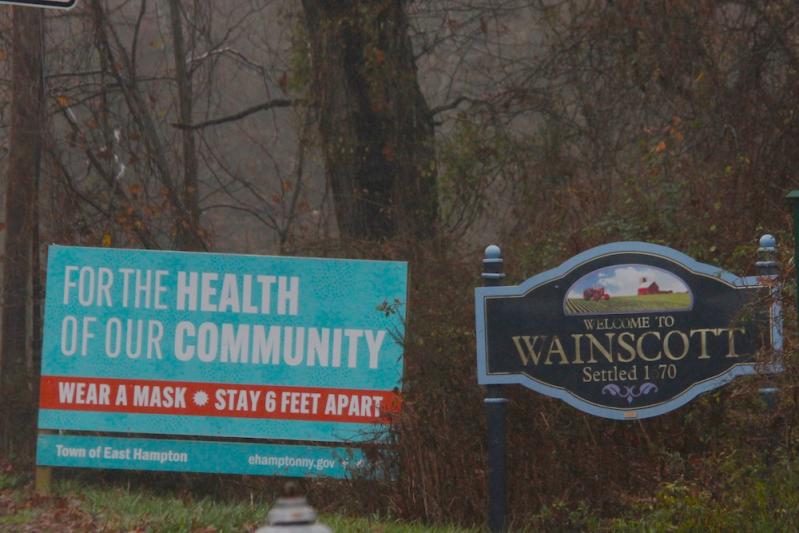 A sign put up by the town in Wainscott reminds people to wear masks and practice social distancing.
Durell Godfrey
By Christopher Walsh

Calling for a “spiritualized Thanksgiving” and for thinking of the meaning of giving thanks as a second wave of Covid-19 infections sweep the state and the nation, Gov. Andrew M. Cuomo on Wednesday called on New Yorkers to remember the essential workers “who left their homes so everyone else could stay in the safety of their homes.”

Speaking from Rochester -- in Monroe County, where coronavirus transmission has spiked in recent weeks -- the governor warned of dark days ahead, describing “the inverse of a closedown,” given already high transmission rates coupled with a significant uptick in travel, college students returning home for the holiday, and outdoor gatherings waning as temperatures fall. “The Covid rate will be going up,” he predicted, pointing to Dec. 6 as the approximate date of a new spike, or 10 days after Thanksgiving.

"Another surge in cases beyond what we've already seen now is virtually guaranteed if we do not take the proper precautions," Suffolk County Executive Steve Bellone said later in his own press briefing.

The latest data from the state include a 5.2-percent positivity rate in the micro-cluster zones identified as “hot spots,” and a rate outside those zones of around 3 percent. The approximately 173,000 tests administered on Tuesday present an overall statewide rate of 3.6 percent, the governor said. Forty-one New Yorkers died on Tuesday, he said, noting the accelerating daily rate of fatalities, and hospitalizations had increased by 126, to around 2,900.

At a testing site set up in the Hampton Bays School District, 417 people have been tested so far and only four have tested positive, Mr. Bellone reported. In the Riverhead School District, 524 rapid tests have been administered and 12 have come back positive. A community testing site in Riverhead operated by Sun River Health launched on Monday and has administered over 100 tests, while one set up on Friday in Hampton Bays by Stony Brook Southampton Hospital tested 60 on just its first day. A complete list of testing sites can be found on the county's website.

Mr. Bellone referenced a report in The New York Times that infection rates in the United States had become so high that public health officials were giving up on contact tracing efforts. That is not the case in Suffolk, he said, which has "an army of contact tracers" who are making hundreds if not more than a thousand calls every day.

“Global experts have all been recommending the same thing to us now, which is start to develop what they call a winter plan,” the governor said earlier. “That’s what we’re going to be doing.” That, he said, would incorporate prioritizing areas with the highest infection and hospitalization rates. “What is the greatest fear during Covid? The greatest fear is you overwhelm the hospital system, the infection rate goes up so high that hospitals can’t keep up with the rate.” The winter plan will also include a strategy to keep schools open, especially for kindergarten through eighth grades, and “operationalizing a vaccine plan” for the state.

He was to speak with President-elect Joseph Biden’s pandemic advisory team on Wednesday afternoon, the governor said, and would “talk about how hard it is for states to administer a vaccine program, and what states actually need to do. But I can tell you it is going to be much harder than anticipated.” States will need federal funding, he said, and “the states are broke. Washington never approved state or local funding.” He pointed to an $8 billion estimated cost for all of the elements needed to distribute and administer a vaccine nationally, and just $200 million allocated to date. Meanwhile, he said, no provisions have been made to distribute a vaccine to “Black, brown, poor, and rural communities,” which the pandemic has hit especially hard, nor for public education or outreach.

In promoting the wearing of a face covering -- he put on a mask bearing the message “Don’t be a turkey, wear a mask” at the end of his remarks -- the governor reminded people of what they have to be thankful for, namely “the way New Yorkers have come together and the spirit of community that has managed this Covid illness. New Yorkers have done an incredible job.” Early in the pandemic, the state the highest infection rate in the country; it now has the fourth lowest, behind only Maine, Vermont, and Hawaii. “Who took us from the highest rate to one of the lowest? New Yorkers did it, because it’s all about their behavior and the actions of New Yorkers. What New Yorkers do determines the infection rate in the state.”

He asked that the state’s residents remain vigilant through the holiday season to hold down the infection rate, which he noted is commonly spread by those who are asymptomatic. He thanked essential workers like bus drivers, doctors, nurses, and utility workers, “many of whom died so other people could stay home. . . . Tens of thousands of families celebrating without a loved one, people who gave their life during Covid to help others. That’s something to be thankful for. And remember the less fortunate.”